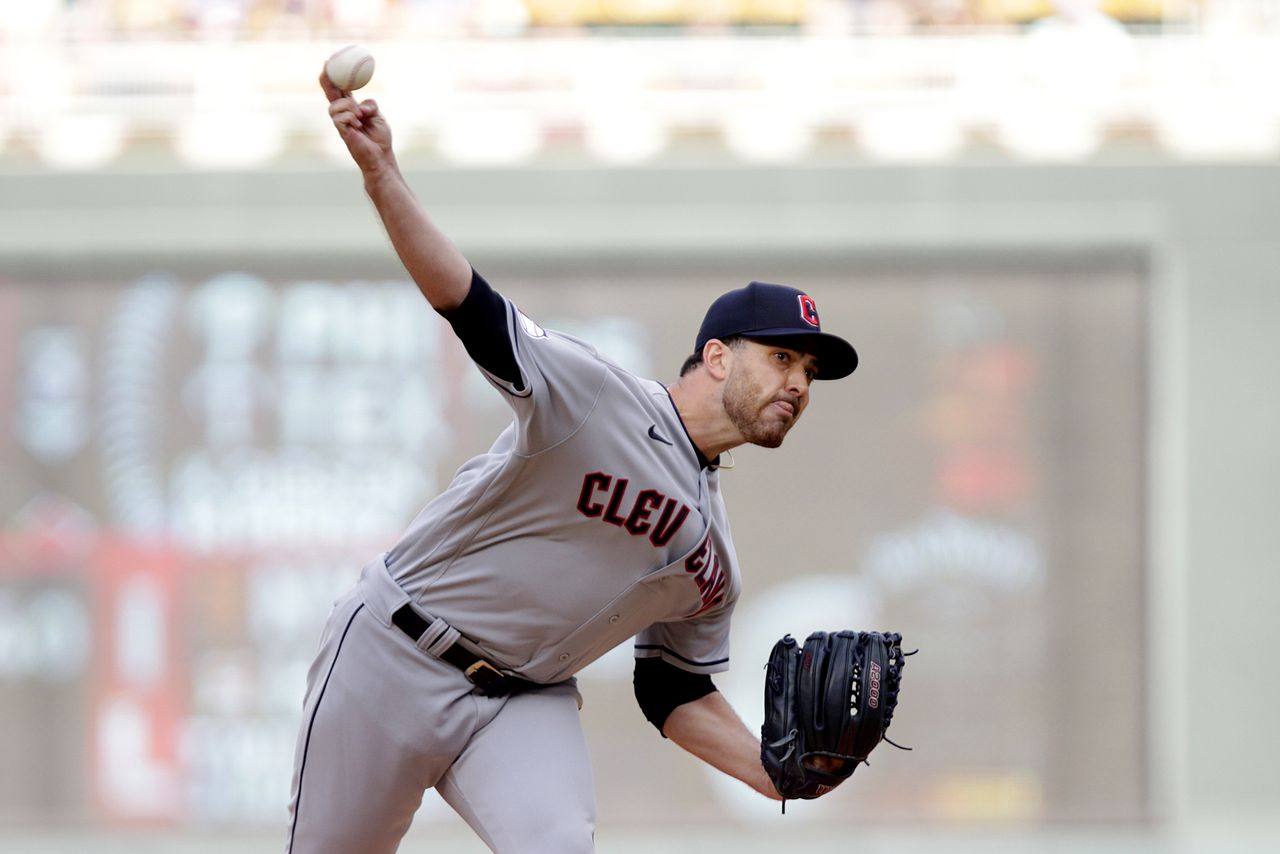 MINNEAPOLIS — The quest for first place is never easy.

The Guardians found that out Tuesday at Target Field. They burned through a 3-0 lead and a 5-5 tie before finally prevailing, 6-5 against the Twins in 11 innings. The victory moved them into a virtual tie for first in the AL Central with the Twins.

To be precise, they have a percentage point league over Minnesota, .556 to .551. But the G’s have played six fewer games than the Twins because of postponements. It’s the first time they’ve been in first place since April 23.

The Guards came into the game rolling. . .and they still are. They are 6-1 on this nine-game trip with 17 wins in their last 22 games.

Not only that, they brought Aaron Civale and Franmil Reyes off the injured list and Jose Ramirez returned to the lineup after missing two games with a bruised right thumb. The results of those moves were good, but not as good as Andres Gimenez’s go-ahead single in the 11th that scored Oscar Gonzalez, the automatic runner.

Emmanuel Clase retired the Twins in order in the 11th for his 16th save in 19 chances. Class received a scare when Jose Miranda made the last out on a long fly to the track in the left field that Steven Kwan caught. He has saved five of the G’s six wins on this trip.

Cleveland had runners on the corners and one out in the 10th, but Oscar Gonzalez grounded into a 6-4-3 double play after a nine-pitch duel with hard-throwing Jhoan Duran. In the bottom of the 10th, Trevor Stephan (3-2) struck out the middle of the Twins order in succession — Carlos Correa, Max Kepler and Gary Sanchez — after walking Byron Buxton to put runners on first and second.

“We’re seeing some of these guys grown up right in front of us,” said Francona. “We have guys who aren’t pitching in the fifth inning anymore. They’re pitching in some pretty important innings. It’s fun to watch.”

Regarding the contributions of the G’s newcomers, Civale pitched five good innings and left with a 3-2 lead. Reyes hit a game-tying homer in the eighth and Ramirez doubled and scored.

The Guards are 3-0 in extra innings on this trip, beating Colorado, the Dodgers and the Twins. They are 6-2 in extras for the season. The Twins are 1-3.

“I think Emmanuel Clase is a huge reason,” said lefty Sam Hentges, who worked around two hits in a scoreless ninth. “As soon as we scored that run in the 11th inning, I turned to Eli (Morgan) and said, ‘That’s the ballgame.’”

The Guardians were nursing a 3-2 lead when Luis Arraez hit a three-run homer off Morgan in the seventh to put the Twins ahead, 5-3. Enyel De Los Santos, who relieved Civale, retired the side in order in the sixth. He opened the seventh with a strikeout, but when he walked pinch-hitter Trevor Larnach, Morgan entered the game.

Morgan, one of the hottest relievers in baseball, allowed a double to No.9 hitter Ryan Jeffers that chased Larnach to third. Arraez gave the Twins their only lead of the night when he hit a 75 mph changeup over the wall in the right.

The Guardians, however, have proven to be dangerous in the late innings during this hot streak. Josh Naylor singled with one out in the eighth. Reyes came to the plate with two out after striking out in his first three at-bats following his rehab stay with Class AAA Columbus. He worked the count full before sending Emilio Pagan’s next pitch over the wall in center field on a line to tie the game at 5-5.

He was his fourth homer of the season and his first since May 7.

“Franmil had one big at-bat tonight and it was really nice,” said Francona. “It was a tough situation because Eli has been so good. All of a sudden we’re down, but to fight back like that, especially on the road, is good.

“There was a lot of good stuff. I thought it was two good teams playing really good baseball.”

The Guardians, entering the game, had scored three runs off Twins right-hander Joe Ryan in three starts covering 18 innings going back to last year. They had that many runs Tuesday through the first three innings.

Gonzalez doubled home Kwan with two outs for a 1-0 lead in the first. Kwan, hitting leadoff for just the sixth time this season, opened the game with a single, his first of four hits. Amed Rosario also singled to put runners on first and second.

Ryan Ramirez retired on an infield fly rule pop up in short right field. Naylor forced Rosario at second base with a grounder as Kwan went to third. Gonzalez followed with a double to the gap in right center for his ninth RBI since being promoted on May 26.

Naylor made it 3-0 with a two-run homer in the third off Ryan. He hit a 2-2 pitch over the right field wall for his eighth homer.

Civale, pitching with the lead, looked strong through five innings in his first start since May 20. He had five strikeouts though the first three innings.

He ran into problems in the fourth when Alex Kiriloff doubled home two runs with two out to cut the lead to 3-2. Kepler reached on a one-out single and Sanchez walked. Civale struck out Urshela, but couldn’t get past Kiriloff.

Civale escaped the fourth and pitched a scoreless fifth, retiring Buxton and Correa to end the fifth with Arraez on second base representing the tying run. Civale allowed two runs on five hits with seven strikeouts and one walk.

“It was hard to be away,” said Civale, “but this team is rolling right now. I’m just glad to be apart of it. It’s awesome to be back in the clubhouse.”

Guardians merchandise for sale: Here’s where you can order new Cleveland Guardians gear, including T-shirts, hats, jerseys, hoodies, and much more.

Ramírez trails in All-Star Game voting; Andrés Giménez in the hunt at 2B

Matchups to watch as Guardians face Twins with first place in AL Central on the line: Podcast

They’re young. They’re fun. Who knows how good they can be? – Terry’s Talkin’ Guardians

September dreams: Is it too early for Guardians vs. Twins to start the stretch run?