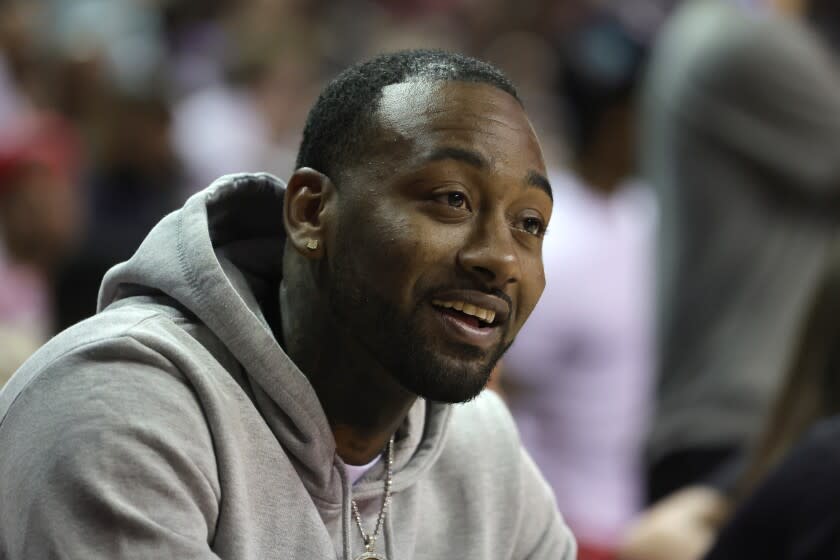 After injuries and a year spent out of the NBA, John Wall has no doubt he can reclaim the form of an All-Star point guard who can do everything on the court.

He signed with the Clippers in free agency because, flanked by Kawhi Leonard and his friend Paul George, he knows he won’t need to.

“I kind of looked at the picture of like, where can I go I don’t have to be the John Wall from 2016 and have to carry the load and do all those and have the pressure on me?” he said Saturday in his first public comments since joining the Clippers.

“Just imagine I got to push the pace and I have guys like a Kawhi Leonard or Paul George on this side or Nicolas Batum or Reggie Jackson or Terance Mann or Luke Kennard and have a big like [Ivica Zubac] who can run the floor,” Wall added. “… For me, I’m happy because I don’t have to have the best player guarding me every night like I have had my whole career.

“You tell me the third-best defender is going to have to guard me? Good luck.”

The 31-year-old former No. 1 overall draft pick averaged 18.8 points, 9.2 assists, with 4.4 rebounds and was regarded as the NBA’s fastest player during his first six NBA seasons. Then he entered a three-year stretch he called “the darkest place I have ever been.”

Heel and Achilles tendon injuries ended a run of five consecutive All-Star appearances. His mother died of cancer and a grandmother also died, he said. Traded to Houston in 2020, he played just 40 games before spending all of last season apart from the team, training often in Miami, when he didn’t fit with the Rockets’ rebuild around a youthful backcourt.

The question looming over the addition was which version of Wall the Clippers were getting, and whether he could still collapse defenses with his speed off the dribble, into the paint. Wall said he is fully healthy and that last year’s absence wasn’t his choice.

“Everybody kept saying he’s hurt. I wasn’t hurt at all,” Wall said. “I was ready to play, I just was in a bad situation — well, not bad situation, but a situation I couldn’t control. And it was understandable. Like I said, nothing hard against those guys.”

Wall has already been taking part in workouts alongside such Clippers veterans in a Las Vegas suburb in recent days, part of what he called the process of building trust toward what he called “one goal, and trying to win a championship.”

To that end, he said he doesn’t care whether he or Jackson starts.

“I’m just happy to play basketball again,” he said. “I’m a competitor. I know a lot of people ask me, are you mad if you start or not start — I don’t care, I’m a competitor and I just want an opportunity to go out there and compete for a spot and if I get it I get it. And if I don’t, we know how talented Reggie Jackson is and what he’s done for this team.”

Wall’s signing became official Friday, less than two weeks after he and Houston agreed on a buyout in which Wall agreed to give back $6.5 million of the $47 million he was owed next season.

His interest in the Clippers had been in the works. Wall said he had previously discussed joining the team with Leonard and George, whom he once attempted to recruit to Washington. The two have been closed since they worked out together before the 2010 NBA draft. George’s presence was an obvious appeal, but so too was playing for coach Tyronn Lue.

“I’m just like, OK, this is a team that I can fit with,” Wall said. “Watching where I feel like they need some speed, and someone who can break down the defense, get into the paint. Find guys. That’s what my job was. That’s what I’ve done my whole career. And getting people paid. That’s what I do.”