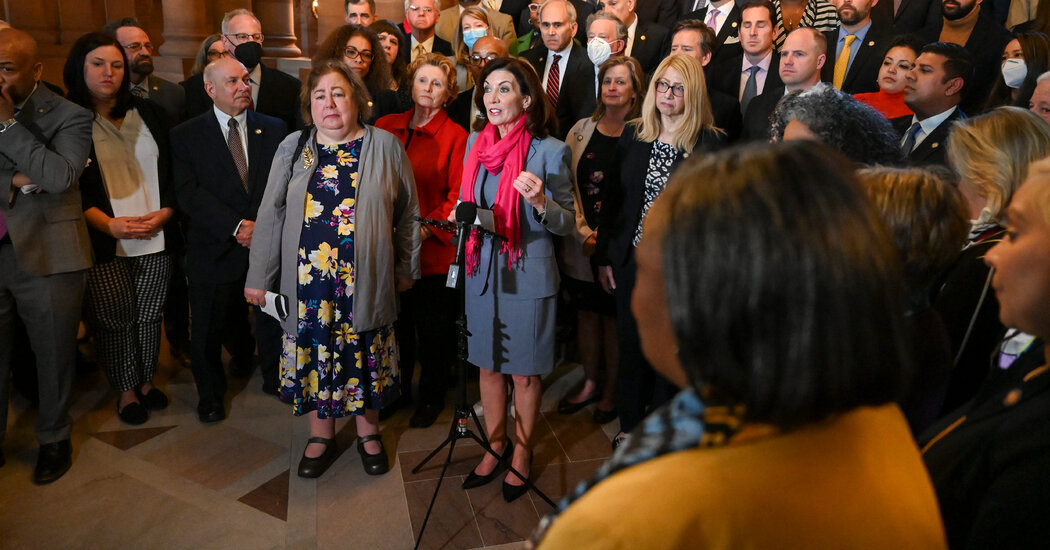 Govt. Kathy Hochul of New York announced on Sunday that she had tested positive for the coronavirus — the worst sort of Mother’s Day surprise for the state’s first mom governor.

Aides said that Ms. Hochul was asymptomatic, and that the virus had been detected as part of the governor’s testing routine in Albany.

The news forced Ms. Hochul to cancel a trip she had planned to Washington, DC, to see her family and week-old granddaughter.

Ms. Hochul’s exposure comes as the state battles yet another variant that is more transmissible than previous versions of the virus. Over the past two months, case numbers have steadily ticked upward, though deaths have remained relatively stable.

For weeks, officials have warned that New York could be on the brink of a new spike, though the proliferation of at-home tests has made it difficult to assess the scope of the problem.

The rise in cases comes as coronavirus precautions, such as vaccine and mask mandates, have been rolled back across the state.

According to public schedules, Ms. Hochul spent the weekend in Albany, where the risk of infection is high, according to the Centers for Disease Control and Prevention. Cases upstate have swelled in recent days, one of just a few such spikes in the country.

The governor’s team said that she was following regular precautions with regards to masking.

Ms. Hochul is far from the only public official to have been exposed to the virus recently — in April, New York City’s mayor, Eric Adams, also tested positive.

And in the final, frenzied days of budget negotiations, many top members of Ms. Hochul’s inner circle contracted the virus, though the governor managed to stay healthy. This is the first time she has been infected, according to her staff.

The exposure follows a difficult month for Ms. Hochul.

In April, her lieutenant governor at the time, Brian A. Benjamin, was arrested on federal bribery charges and resigned. That same day, a gunman opened fire in a subway car in Brooklyn, stoking city dweller’s fears, and complicating officials’ efforts to declare that New York City’s pandemic troubles were behind it.

The next week, the State Court of Appeals rejected the State Senate and congressional maps that Democratic lawmakers in Albany had drawn, saying they violated a New York ban on partisan gerrymandering. The ruling caused an uproar in Albany, and injected new chaos into the primary season.

Ms. Hochul’s staff did not provide a list of plans that might be interrupted at this time by the governor’s quarantine, and said that she would be working remotely. May is a busy month in Albany, as lawmakers hammer out the last of the legislation that will pass in this year’s session, which is scheduled to end on June 2.

After announcing her positive test, the governor repeated a message that has by now become familiar: “A reminder to all New Yorkers: get vaccinated and boosted, get tested, and stay home if you don’t feel well,” she said on Twitter .