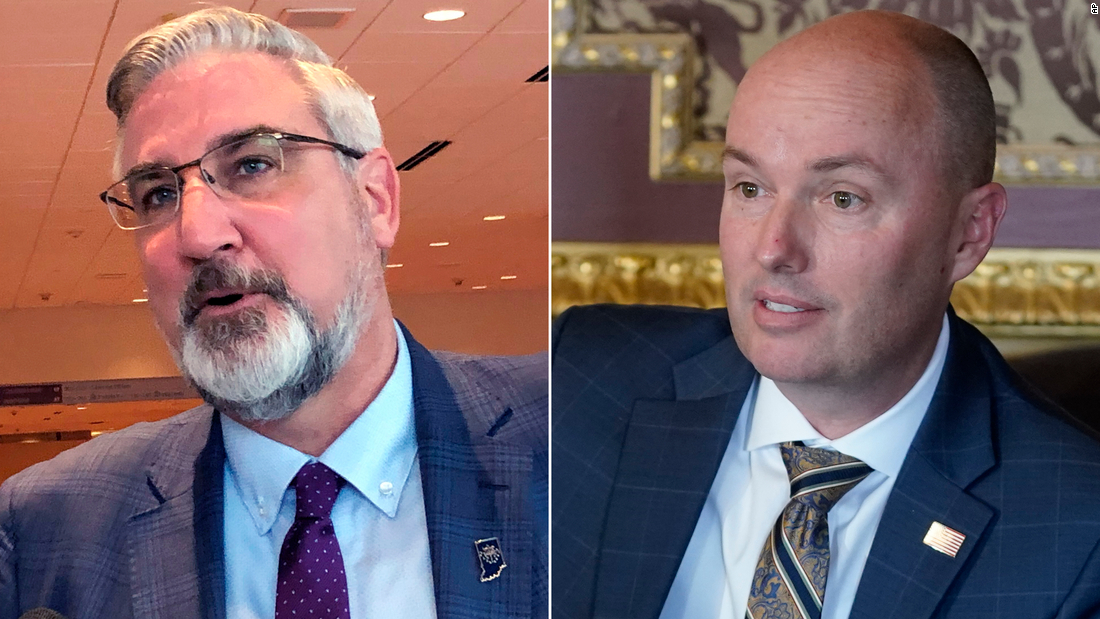 Explanations for the vetoes — of bills that sought to prohibit transgender women and girls from competing on school sports teams consistent with their gender — by Utah Gov. Spencer Cox on Tuesday and Indiana Gov. Eric Holcomb on Monday shared some key similarities. But Cox, noting that only four of the 75,000 high school athletes in his state are transgender, proved an unusually compassionate voice on the issue.

“That’s what all of this is about. Four kids who aren’t dominating or winning trophies or taking scholarships. Four kids who are just trying to find some friends and feel like they are a part of something. Four kids trying to get through each day,” Cox wrote in a letter to the leaders of the state’s Republican-led legislature.

“Rarely has so much fear and anger been directed at so few. I don’t understand what they are going through or why they feel the way they do. But I want them to live,” he added, noting that studies have shown that the uniquely high rates of suicide among trans students can be reduced when they’re shown “even a little acceptance and connection.”

The comments marked a notable departure from how other GOP governors have discussed the issue, with many who have enacted similar bans using transphobic and emotionally charged language to justify their decisions. And the two vetoes signal a clear awareness among the Republican governors of the social and legal gamble for their states after a flurry of controversy and several lawsuits brought negative attention to other states that put similar bans on their books in recent years.

Like Cox, Holcomb also wrote in a letter to Indiana state lawmakers on Monday that “after thorough review,” he found “no evidence” that the problem his state’s bill sought to fix existed.

Holcomb claimed HEA 1041 was too broadly written, specifically cited concerns about how the legislation would be applied consistently across the state and, like Cox, noted the lawsuits challenging similar laws across the country.

“Amidst the flurry of enthusiasm to protect the integrity and fairness of women’s sports in our state — a worthy cause for sure — this bill leaves too many unanswered questions,” he wrote.

Indiana state lawmakers could potentially override the governor’s veto when they meet in late May for one additional legislative day. The bill passed both chambers earlier this year with veto-proof majorities. Utah House Speaker Brad Wilson, a Republican, said Tuesday that he anticipates his caucus will have enough votes to override Cox’s veto and that they plan to do so later this week.

“Members of the legislature, including the sponsor, have worked tirelessly for more than a year to find the best way to approach a complex issue and I anticipate that we will have sufficient votes to override the veto,” Wilson said.

The debate over the inclusion of transgender athletes, particularly women and girls, has become a political flashpoint in recent years, especially among conservatives.

Indiana’s legislation states that “a male, based on a student’s biological sex at birth in accordance with the student’s genetics and reproductive biology, may not participate on an athletic team or sport designated under this section as being a female, women’s, or girls’ athletic team or sport.” The bill would also protect schools and athletic associations from liability for enforcing the legislation.

While sex is a category that refers broadly to physiology, a person’s gender is an innate sense of identity. The factors that go into determining the sex listed on a birth certificate may include anatomy, genetics and hormones, and there is broad natural variation in each of these categories. For this reason, critics have said the language of “biological sex,” as used in this legislation, is overly simplistic and misleading.

Utah’s bill would’ve set up a similar ban, but Cox said in his letter that the legislation underwent a last-minute change that would “implement an all-out ban,” rather than allowing a committee to decide on an individual basis whether the athlete can participate.

“It is important to note that a complete ban was never discussed, never contemplated, never debated, and never received any public input prior to the Legislature passing the bill on the 45th and final night of the session,” he said. “For this reason, many legislators who might have otherwise supported the policy felt compelled to vote against it.”

Advocates of such measures have argued that transgender women and girls have physical advantages ​over cisgender women and girls in sports. But a 2017 report in the journal Sports Medicine that reviewed several related studies found “no direct or consistent research” on trans people having an athletic advantage over their cisgender peers, at any state of their transition, and critics say this legislation would add to the discrimination that trans people face, particularly trans youth.
So far this year, GOP governors in Iowa and South Dakota enthusiastically signed legislation banning transgender women and girls from participating on sports teams consistent with their gender at accredited schools and colleges.

Holcomb appeared to refer Monday to the limited legal success opponents have had in fighting the measures, including last year when a federal judge temporarily blocked West Virginia’s enforcement of its ban after advocates sued the state, with the judge saying he had “been provided with scant evidence that this law addresses any problem at all, let alone an important problem.” And in 2020, a federal judge blocked Idaho’s enforcement of its sports ban.

LGBTQ advocates applauded the governors’ decisions this week, with the Human Rights Campaign, one of the nation’s largest LGBTQ rights groups, saying that Cox has “shown that he sees the humanity of the transgender youth targeted by this legislation — something governors in states like South Dakota and Iowa have refused to do.”

“We urge lawmakers to uphold the Governor’s veto because all children in Utah deserve better than being treated as political pawns — what they deserve is to be able to have fun with their friends, exercise, and learn how to be part of a team, “said Cathryn Oakley, the group’s state legislative director and senior counsel, in a statement.

Katie Blair, the public policy director of the Indiana ACLU, said in a statement Monday that Holcomb’s veto “wouldn’t have been possible without the thousands of Hoosiers who voiced their strong opposition to state legislators and who showed up at the Statehouse to oppose this harmful bill. Discrimination has no place in our state.”

This headline and story have been updated with additional developments Tuesday.

CNN’s Amanda Musa and Paul LeBlanc contributed to this report.