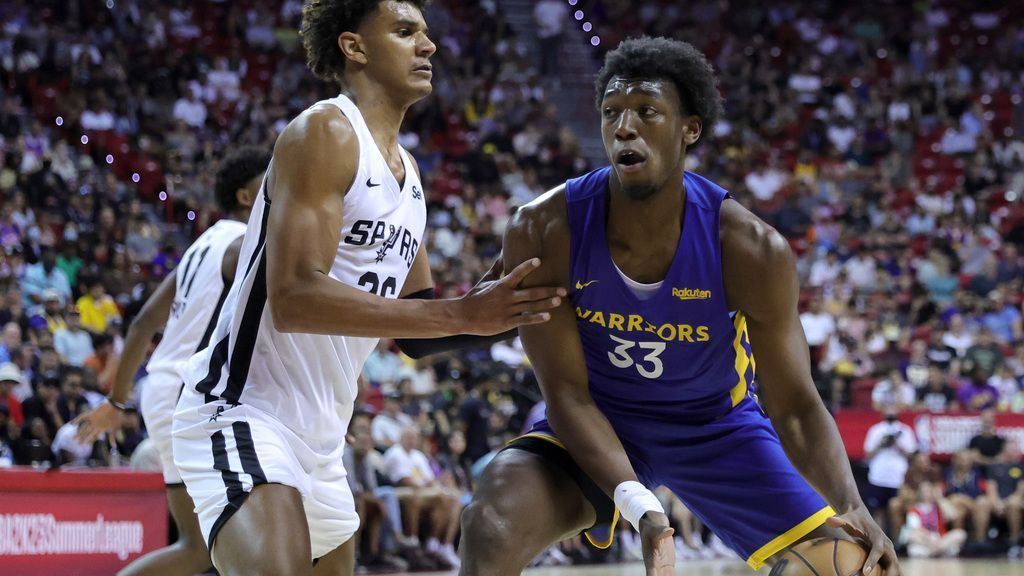 LAS VEGAS — As Golden State Warriors forward Jonathan Kuminga started to attack the hoop, he hooked the ball over his head to find a cutting James Wiseman. In one motion, Wiseman caught the ball in midair and threw down a dunk.

It was the first possession of the Warriors’ summer league game against the San Antonio Spurs on Sunday and was Wiseman’s first bucket since March, when he played in a trio of G League games.

One minute after his alley-oop dunk, he knocked down his lone 3-pointer of the night.

“It felt good,” Wiseman said. “There are a lot of things for me to work on, I mean, my timing was pretty off. But this was my first game. I had fun out there.”

Before his short stint in the G League, Wiseman hadn’t played since April 2021, when he tore his right meniscus.

Wiseman played four four-minute spurts at the start of each quarter in his summer league debut — an 86-85 win over the Spurs. He checked back in for the final three minutes of the game — something Wiseman said he was more than comfortable doing. In his 19 minutes, Wiseman finished with 11 points on 6-of-7 shooting, 2 rebounds and 2 blocks.

In Wiseman’s eyes, the areas where his timing was off were on setting screens and reading patterns.

“For him to be able to come out and play in a summer league game like today with good composition and playing at the rim, blocking some shots, he just looked like a really good basketball player,” Warriors summer league coach Jama Mahlalela said. “That first outing is all we wanted, and we told him to come out, have fun, enjoy the game and let it come to him.”

There were glimpses of Wiseman’s athleticism throughout the night — highlighted by his dunk and blocks. He ran the floor well and wasn’t afraid to play physically.

“It was physical. That’s a huge adjustment,” Wiseman said. “I’ve been out, so I’ve been doing a lot of individual workouts. So for me to just get that pushing, that physical contact, I’m proud to be out there.”

His return provided the Warriors with something they’ve been missing so far during summer league: real size and presence in the paint. And it’s something Golden State could use more of.

But, the Warriors want him to use his size more on the boards. As soon as the game ended, Wiseman walked over to Mahlalela and told him he knows he needs to grab more than just two rebounds, as he did against the Spurs.

“[It’s really about] staying attentive, staying aggressive and just going to get it,” Wiseman said. “The ball really wasn’t coming my way that much, but I was trying to get as much as I can.”

The Warriors are emphasizing a focus on the fundamentals for Wiseman through training camp. No matter what, those will be a big part of his role with Golden State during the regular season.

But now that they have actually seen Wiseman play, the Warriors can start to plan out how they want to use the 7-foot center.

“Until he’s playing, we don’t really know what we have. You don’t know what you’re working with,” Mahlalela told ESPN. “I hope that by the first week of August, we have a much more clear plan of what he needs to work on through August and training camp.”

Mahlalela also thinks they will learn some of that by the end of summer league, depending on how many more games Wiseman plays.

The initial plan is to have Wiseman play in Tuesday’s game against the Boston Celtics, along with Kuminga and Moses Moody. Monday’s practice will be a light workday for Wiseman — which the Warriors try to do after every “heavy day.”

How much more Wiseman plays after that is up in the air. But at this moment, just having one game under Wiseman’s belt is the most important thing for Golden State.

“Walking into the locker room after the game and all the players cheering for him I think he can kind of, ‘Ah, I can breathe again,'” Mahlalela told ESPN. “Every conversation I have with him is, I am so proud of you but now the real work begins.”