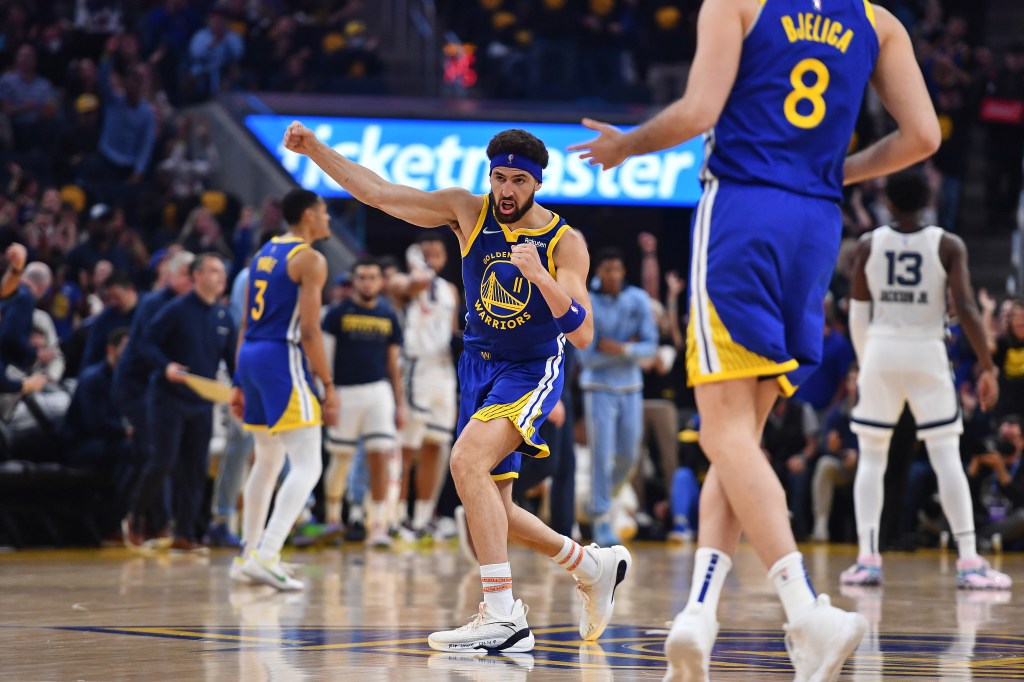 The cheers mocked the Grizzlies’ unofficial anthem, which Stephen Curry had said was the team’s mentality heading into Game 5, a comment that didn’t sit well with Memphis.

“It was phenomenal,” a smiling Curry said of the crowd’s cheers after the Warriors eliminated the Grizzlies from the postseason with a 110-96 win. “It’s part of the fun of the playoffs, the fans get to enjoy the celebration however they want to.”

The Grizzlies made their statement in Game 5 of the Western Conference semifinals Wednesday night, romping the Warriors by 39 points. But it was Golden State who put the young and athletic Grizzlies in their place Friday night in Game 6.

With the win, the Warriors punched their ticket to the Western Conference Finals for the sixth time in eight years and ended Memphis’ season.

“It’s special,” Klay Thompson said of Golden State making it back to the conference finals after a two-year hiatus. “Everything we’ve bene through the last few years, it’s really an incredible opportunity… We have a big match ahead of us because as we know as each round advances, it gets a little harder.”

“Game 6 Klay” made an appearance Friday night, scoring a team-high 30 points. And Curry scored 11 of his 29 points in the final quarter.

After Thompson made his eighth 3-pointer to give the Warriors a 13-point lead with less than three minutes remaining, the Warriors guard skipped down the court, putting six fingers in the air. He then galloped back to the team huddle, high-fiving every teammate in the process.

“Thirty sounds way better than 27,” Thompson said of his celebration. “On top of that, had a lot of pent-up energy these last couple years and to be in this situation and to seal the game there, it all came out.”

The Warriors started Kevon Looney for the first time this series. He replaced Jonathan Kuminga to give Golden State an aggressive rebounder and veteran defender to go up against Grizzlies center Steven Adams. The insertion of Looney created a more lively start to the game for the Warriors after slow starts hindered them in previous games.

Golden State jumped to an 8-point lead in the opening quarter, though the Grizzlies were able to come back. Neither team took a double-digit lead until the Warriors’ pulled ahead late in the fourth quarter.

Rebounding has been a key factor in this series, and the Warriors were the better team at it on Friday as they have been for most of the series. They out-rebounded the Grizzlies 70-44, dominating the offensive boards 25-10.

Looney was by far the best rebounder on the court. He grabbed a career-high 22 rebounds and pulled down as many as the entire Grizzlies team in the first quarter. His 11 opening-quarter rebounds were the most for any quarter for him in his career and matched a Warriors playoff record set by Larry Smith in 1987.

Draymond Green and Andrew Wiggins both finished with double-doubles. Green grabbed 16 rebounds and scored 14 points. And Wiggins, who was one of the Warriors’ most impactful players on Friday, had 18 points and 10 rebounds.

The Warriors appeared to be literally throwing the game away with several ill-advised passes and sloppy ball handling. Golden State tallied 19 turnovers, which the Grizzlies capitalized on by scoring 18 points, but it didn’t lead to the Warriors’ demise as it did in Game 5.

The Grizzlies were without leading scorer Ja Morant for the third straight game as he nurses a bone bruise to his right knee.

Meanwhile, the Warriors were without coach Steve Kerr for the second straight game after he tested positive for COVID-19. Mike Brown, who was hired to coach the Sacramento Kings earlier this week, was at helm for the third straight game. He boasts an all-time postseason record of 13-1 while filling in for Kerr.

Brooks was assessed a Flagrant 1 foul in the second quarter after he pushed Curry. With three flagrant foul points, Brooks was in jeopardy of being suspended for one game, but the Warriors didn’t even allow him a chance, effectively ending his season with their win.

The Warriors will have four days off before the beginning of the Western Conference Finals. They’ll play the winner of the Phoenix Suns and Dallas Mavericks series, which will be decided in Game 7 Sunday night.