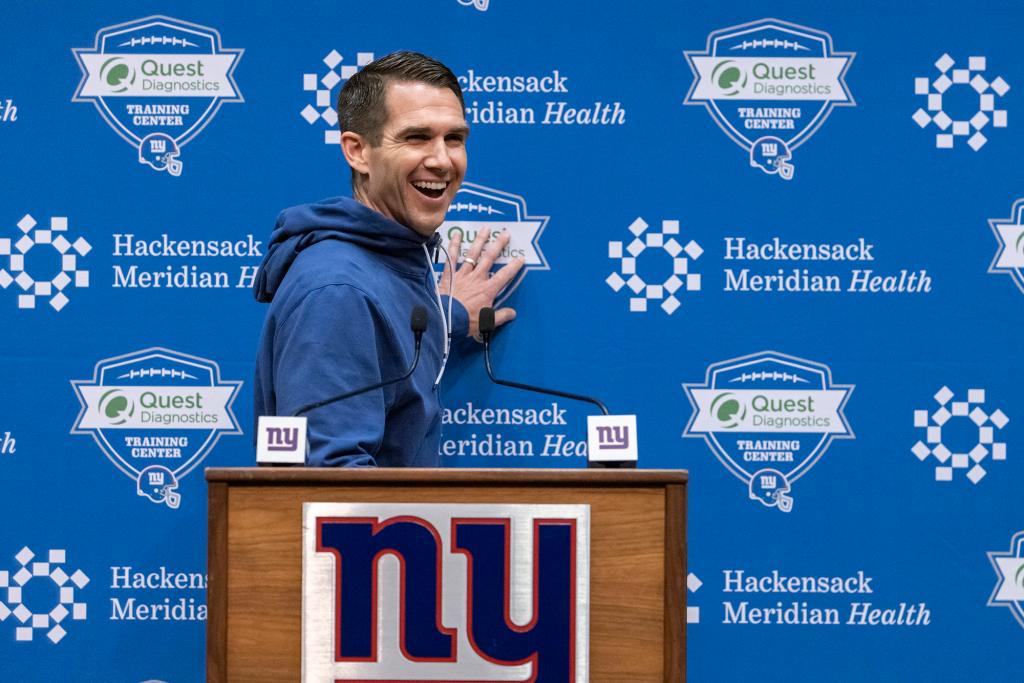 Joe Schoen will get his first shot next week at what Giants fans have come to accept as Super Bowl Thursday — because Super Bowl Sunday has become nothing more than a pipe dream over the last decade.

Schoen was summoned to be John Mara’s Mr. Fixit, to identify the right players and feed them to his hand-picked head coach, so that next year at this time the prospect of a Super Bowl Sunday will make hearts race among the faithful more than Super Bowl Thursday has too often lately and does again now.

You wanted Dave Gettleman out as Giants general manager, and you got it.

You wanted Schoen in as GM, and you got him.

So, at his pre-draft meeting with the media on Wednesday ahead of the first round of the draft next Thursday, Schoen offered the obligatory draft-speak that serves as a rite of spring for 32 GMs. He smiled a lot, in part because that seems to be his way, in part because he is not Gettleman, so he doesn’t have to explain why he hasn’t fixed the offensive line and why he signed and then traded Odell Beckham Jr . and why he tried to win with a faded Eli Manning and quickly changed his mind and shifted into rebuild mode.

Just because Schoen was summoned to be co-savior with his hand-picked head coach, Brian Daboll, doesn’t mean he doesn’t get a honeymoon.

You, the Giants fan, have waited for what feels like an eternity for this man.

I asked Schoen if he feels the weight of responsibility, and he didn’t hesitate.

Do not expect him to be a miracle worker — the journey along hot coals from hell to heaven isn’t traveled overnight.

But Schoen has already displayed a no-nonsense fearlessness to make the tough decisions to extract the Giants from the cap hell he inherited.

He is armed with the fifth and seventh picks in the draft and is well aware that fixing the offensive line is a screaming mandate.

“To get our best version of Saquon [Barkley]Daniel [Jones]the entire offense, that’s gonna be very important to get that right whether it’s running the ball or pass protection, so that will definitely be a priority … the need, the value, where that is, you just gotta make sure it mirrors up or you’re gonna be in the same boat,” Schoen said.

In other words, no Ereck Flowers.

“If you try to force it, and it’s just not the right value,” Schoen said, “we’re sitting up here next year saying the same thing.”

When asked about the Giants’ interest in Mississippi State tackle Charles Cross relative to North Carolina State’s Ickey Ekwonu and Alabama’s Evan Neal, Schoen turned around as if the draft board were behind him and said with a smile: “You want me to give you our board?”

Then he added: “I’m not talk about any specifics or something. Charles is a really good player, really good feet. We like him, whether he should be up in that group or not, that’s for everybody to decide, we’ll see how he falls on draft night, and then over time, we’ll see how he plays out. But all three of those players that you mentioned are talented and good players and they’re great kids, and I think they all have bright futures.”

Of course he would welcome any intel on what the Panthers might be thinking with the sixth pick.

“If you’ve got a crystal ball, I’d love to see it,” Schoen said, and smiled.

His relationship with Daboll, his Buffalo bosom buddy, will be markedly better than the Gettleman-Joe Judge quasi-forced marriage.

“To me the biggest thing is the collaboration between the coaching staff and personnel staff,” Schoen said, “ ’cause it doesn’t make sense to draft a guy if the coaches want no part of him ’cause they’re dead on arrival . If you’re worried about his hands, he stops the ball, they run through my office, ‘Told ya he couldn’t catch!’ ”

Daboll, asked about Schoen, said: “He’s a great teammate. He’s a great listener. I think the one thing you see with him in this position is he’s a really good leader, treats people the right way. He lets people do their job. He takes input, but at the end of the day he’s charged with making the decision.”

A lot must go right, starting with Daboll helping Jones prove the naysayers wrong and Mara right, but a lot can go right from one year to the next in the NFL as long as the GM nails the draft and his head coach coaches them up.

Only eight days from his first Super Thursday, this is the wrong time to warn that a lot can go wrong, because Schoen has yet to draft a bust or lose a game.

“I’ll probably be too anxious to golf,” Schoen said. “It’ll be exciting. It’s something you dream about. For the day to finally be here, it’ll be really cool.”

He has fielded exploratory calls from teams interested in moving up and will make calls on draft day thirsting for last-minute secrets. He will have to be blown away to move down.

“For Brian and I, it’s our first two picks as New York Giant head coach and general manager,” Schoen said, “so in terms of foundational pieces, in terms of being good players and the type of people we want, it’s very important .”

“We’re gonna get two guys that we think fit from a character standpoint, from an athletic standpoint, as a football player, and it’s gonna mirror up to what we’re looking for,” Schoen said. “I’m confident we’ll find somebody that checks all those boxes.”

Right man at the right time.