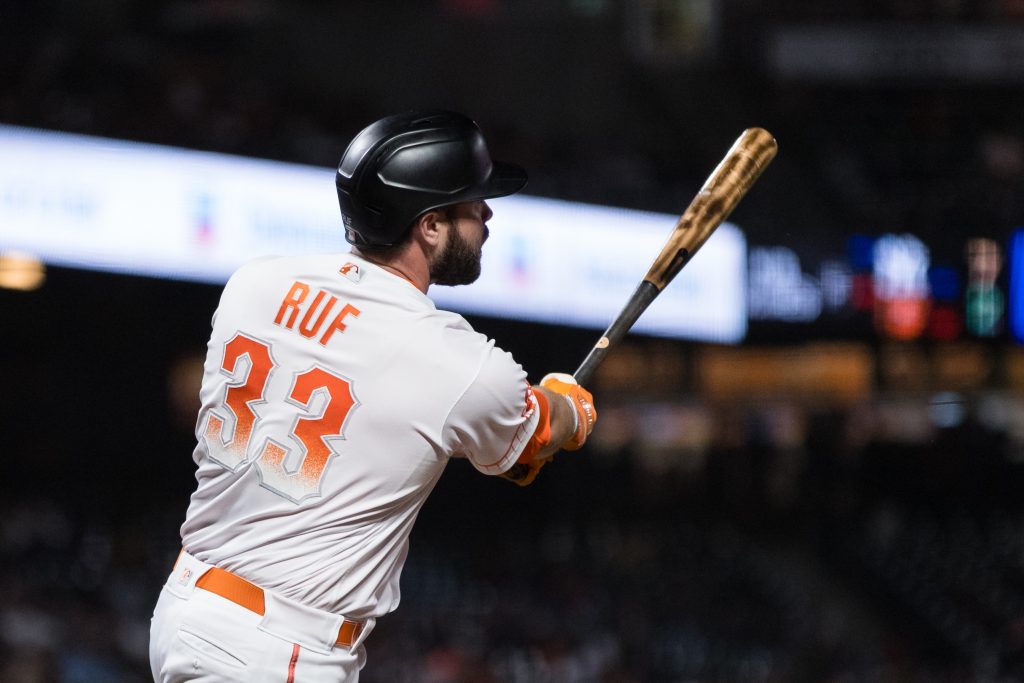 The Giants have agreed to a two-year, $6.25MM deal with first baseman/outfielder Darin Ruf, tweet ESPN’s Jeff Passan. The contract contains a club option for a third season, which would be Ruf’s first potential free-agent year.

Ruf, represented by Vanguard Sports, was projected by MLBTR contributor Matt Swartz to earn $2.6MM via arbitration. He’d have been due another raise via arbitration in 2023 before reaching free agency in the 2023-24 offseason. Joel Sherman of the New York Post tweet that Ruf will earn $3MM this season and next, adding that the 2024 option is valued at $3.5MM and comes with a $250K buyout.

Originally signed by the Giants on the heels of a strong run in the Korea Baseball Organization, Ruf has emerged as a key weapon against left-handed pitching. The former Phillies slugger has decimated southpaws, hitting at a .275/.390/.579 clip with 13 home runs, 11 doubles and a triple in 205 plate appearances. The resulting 157 wRC+, which indicates that Ruf has been 57% better than a league-average hitter against southpaws, ranks 12th among 168 qualified hitters.

That’s not to say Ruf has had a difficult time with right-handers or needs to be deployed strictly as a platoon player, to be clear. He’s no slouch against same-handed opponents either, as evidenced by a robust .270/.372/.461 slash in 207 plate appearances against them. It’s not the same level of dominance he’s had over southpaws, but Ruf’s production has been strong enough that manager Gabe Kapler ought to feel good plugging him into the lineup on just about any given day. And, with the advent of the National League designated hitter, Ruf figures to get more opportunities than in the past.

It’s a highly affordable deal for the Giants — one reflective of Ruf’s atypical career arc. Ruf didn’t see his first prolonged MLB action until his age-26 season, back in 2013, and he didn’t even reach arbitration eligibility until last year — his age-34 campaign. Ruf is already 35 and will turn 36 by late July, meaning he wouldn’t have increased the necessary six years of service time to reach free agency until after he’d already turned 37. He earned a few million overseas while slashing .313/ .404/.564 across three seasons with the Samsung Lions, but given the late-blooming nature of his breakout, it’s not a surprise to see him giving up a free-agent year at a relatively modest rate. This new two-year deal effectively doubles Ruf’s career earnings, which surely makes it a particularly satisfying deal to sign at 35 years of age.