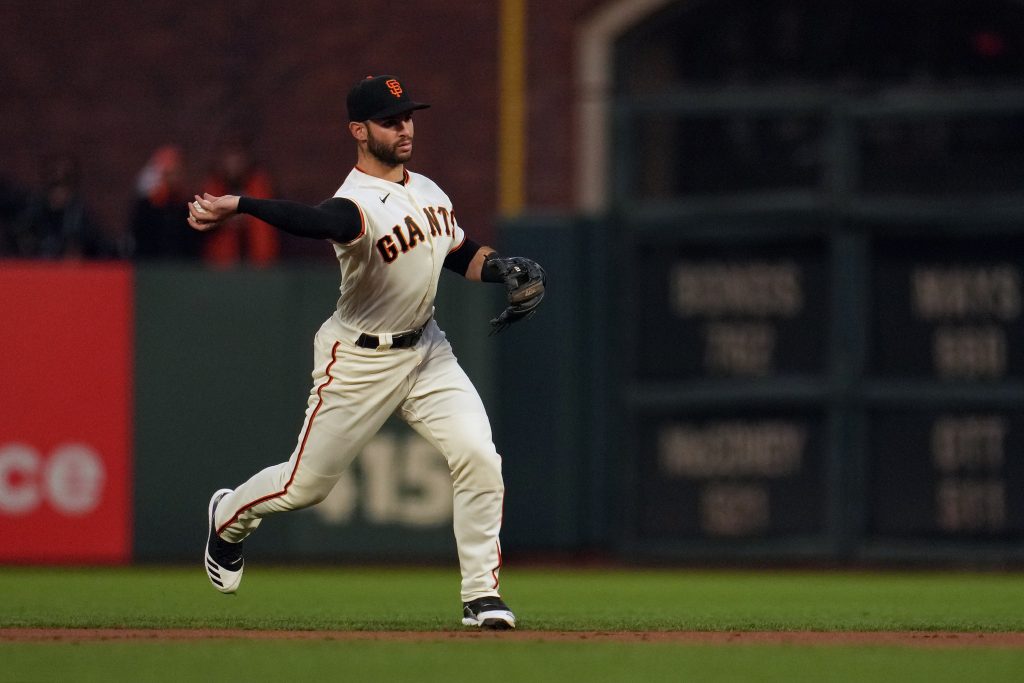 The Giants announced a series of moves before tonight’s contest with the Rockies. Infielder Tommy LaStella has been reinstated from the 10-day injured list, with outfielder Luis Gonzalez optioned to Triple-A Sacramento in a corresponding active roster move (via Susan Slusser of the San Francisco Chronicle). San Francisco also selected reliever Mauricio Llovera and optional Yunior Marte. To create space on the 40-man roster for Llovera, starter Anthony DeSclafani was transferred from the 10-day to the 60-day injured list.

La Stella is in tonight’s lineup as the designated hitter, setting him up to make his season debut. Signed to a three-year deal over the 2020-21 offseason, the lefty-hitting second baseman dealt with a few injuries during his first season in San Francisco. La Stella missed a few months due to a left hamstring strain and then a right hand fracture. He was then hampered by left Achilles soreness late in the season, and he was forced to undergo surgery in late October.

Recovery from that procedure lingered into the regular season and wound up costing La Stella the first five weeks of the year. Now that he’s back, he’ll likely step into a regular second base role. La Stella posted a .250/.308/.405 line in 242 plate appearances during his first season as a Giant, but he’d put up an excellent .281/.370/.449 mark in virtually the same amount of playing time during the shortened 2020 campaign. One of the game’s top contact hitters, La Stella could eventually be a top-of-the-lineup table setter for skipper Gabe Kapler. His forthcoming return no doubt played a role in the Giants’ decision to deal utilityman Mauricio Dubon to Houston over the weekend.

Llovera is back with the big league club for the second time this season. The former Phillies reliever signed a minor league deal over the winter and was selected in late April while the team was dealing with COVID-19 concerns. He appeared in four games and worked as many innings, allowing one run while striking out five without a walk. Despite the solid work, Llovera lost his 40-man roster spot as the club returned to health.

The 26-year-old’s first call-up came as a designated COVID substitute, meaning the team could return him to Sacramento without running him through waivers. That isn’t the case this time around, suggesting the Giants plan to keep him on the 40-man roster for a longer while. That’s understandable after Llovera has tossed 12 2/3 scoreless innings in the minors, fanning 17 batters against a pair of walks. Llovera does have a minor league option year remaining, so he can still bounce between San Francisco and Sacramento while maintaining a 40-man roster spot.

DeSclafani originally landed on the 10-day IL on April 22 as he battled right ankle inflammation. Today’s transfer keeps him out of MLB action for sixty days from that date, meaning he won’t return to an Oracle Park mound until at least late June. The move comes as a bit of a surprise, as the righty had progressed to mound work during his recovery last week.

Kapler stressed that DeSclafani didn’t suffer a setback (via Maria Guardado of MLB.com). Rather, it seems the club is just committed to a cautious rehab for the 32-year-old, whom they re-signed to a three-year deal over the offseason. DeSclafani tossed 167 2/3 innings of 3.17 ERA ball last season.