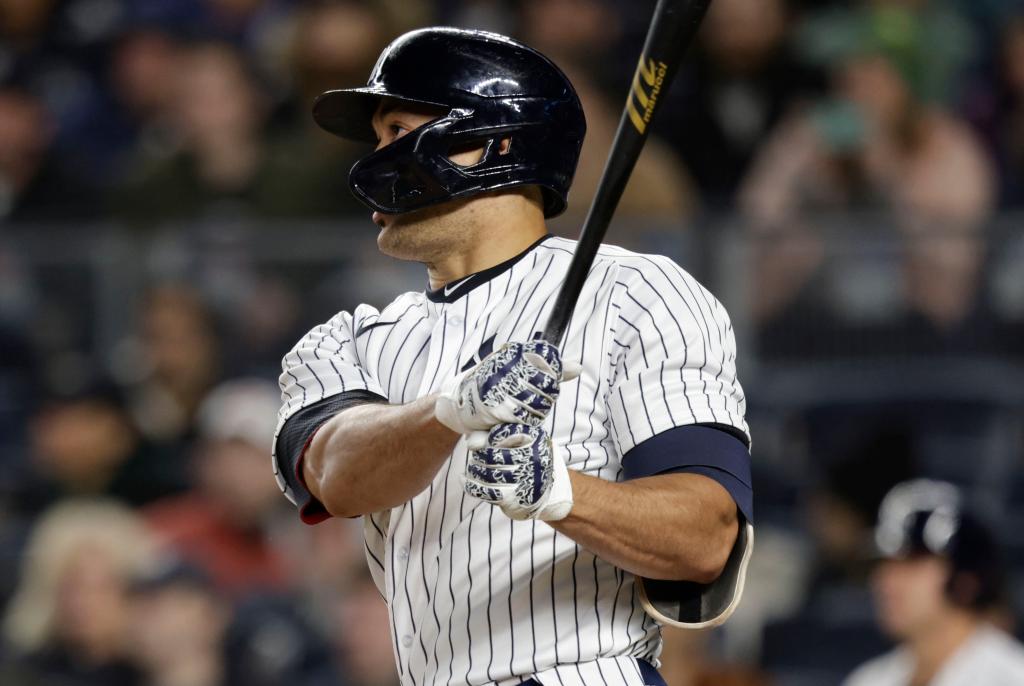 Nearing the end of April, the Yankees are where they hope to be at the end of the regular season: in first place in the AL East.

With the help of Giancarlo Stanton’s bat, the Yankees won their fifth straight game — and seventh in their last eight — with a 5-2 victory over Baltimore on Wednesday night in The Bronx.

Coupled with Toronto’s loss to the Red Sox, the Yankees are alone at the top of the division for the first time.

“We’ve got a good thing going here,” Stanton said. “We just have to keep working and pushing.”

Stanton hit a two-run shot in the first and a go-ahead sacrifice fly in the sixth.

The homer was the 350th of Stanton’s career and followed an Aaron Judge single off Tyler Wells, the right-hander who kept the Yankees scoreless for four innings in Baltimore earlier this month.

It was Stanton’s third homer of the year and first since April 9, when he homered in each of the Yankees’ first two games of the season.

Stanton also reached the 350-homer milestone in just 1,341 games played — the seventh-fastest to reach the mark, behind Babe Ruth and ahead of Ralph Kiner.

History aside, the Yankees could use a hot streak from Stanton, who had been in a 2-for-27 slump before hitting a pair of singles on Tuesday. He’s now got four hits in his last two games.

The Yankees’ current run has come after they suffered a series loss in Baltimore less than two weeks ago.

On another chilly night in The Bronx, Jordan Montgomery pitched well into the sixth.

“You want to pitch in the cold in October, anyway, you might as well practice now,” Montgomery said.

Coming off two stellar outings in which he’d allowed just one run in 11 innings, the lefty pitched around a leadoff double by Jorge Mateo in the fourth.

He hit Ryan McKenna with a pitch, but got Cedric Mullins to fly to center and then caught Mateo off second, getting him into a rundown for the second out. Trey Mancini flied to center to end the threat and keep Baltimore off the board.

Montgomery had few issues with Baltimore until the sixth.

Mullins singled through the right side of the infield with one out and moved to second on a Mancini groundout before Anthony Santander hit one out to left to tie the game at 2-2.

It was the first homer hit off Montgomery this year.

Montgomery followed by hitting Austin Hays and the lefty was replaced by Michael King after just 71 pitches.

Ramon Urias bounced a single through the shift, moving Hays to third for Robinson Chirinos, who popped out to end the inning.

In the bottom of the sixth, DJ LeMahieu drew a leadoff walk from Joey Krehbiel, who had just replaced Wells. After Judge struck out, LeMahieu moved to third when Anthony Rizzo dumped a hit-and-run single into left.

With runners on the corners, Felix Bautista came in to face Stanton, who crushed a line drive to deep center.

Mullins caught up to it, but it easily scored LeMahieu to give the Yankees a one-run lead.

Joey Gallo, fresh off his first homer of the season on Tuesday following an ugly start, hit another home run to right-center to lead off the bottom of the seventh to make it 4-2.

“Off a couple days when we scored double digits and really threw big numbers up there, we grinded our way to five [runs] tonight,” Aaron Boone said.

Clay Holmes pitched the ninth to pick up the save.

“This is a focused group that has a lot to prove,” Boone said. “I feel our focus is in all the right places: Pitching, defense, baserunning and offense. It’s good to see them getting results.”