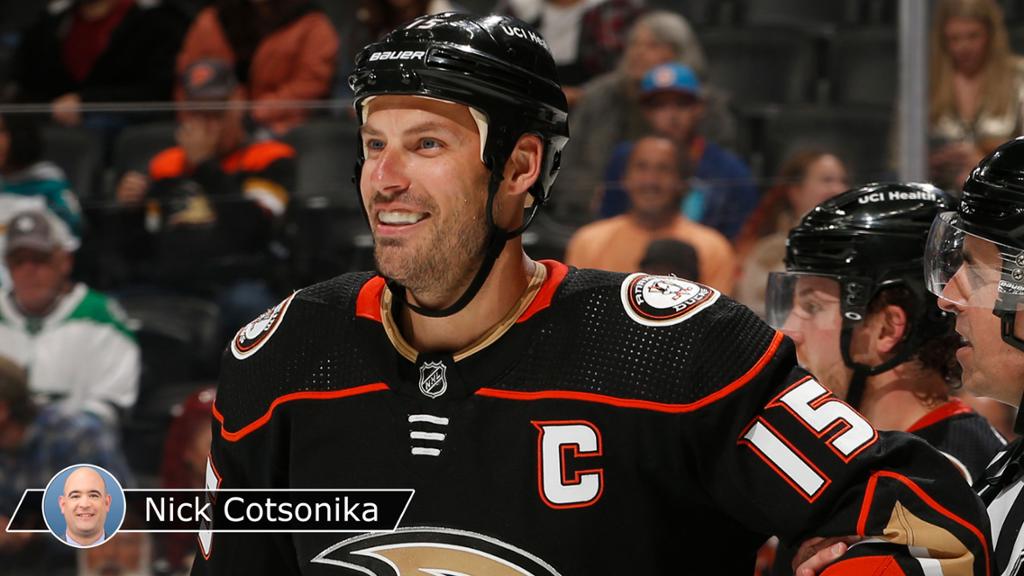 Ryan Getzlaf choked up as he announced his retirement from the Anaheim Ducks on Tuesday, and he thanked everyone you would expect — family, friends, owners, executives, coaches, teammates, trainers. He even thanked the arena workers.

After 17 seasons in Anaheim, the past 12 as captain of the Ducks, the 36-year-old center knows everyone’s face at Honda Center, even if he doesn’t know everyone’s name.

“Being in one place your whole career,” Getzlaf said, “gives you the ability to create friendships.”

That’s the beauty of this.

Getzlaf achieved a rarity in professional sports, not only spending his entire NHL career with the same team, but winning a championship, setting records and leaving a legacy. He means so much to Anaheim; Anaheim means so much to him.

He will sit out the Ducks’ last two games on the road so he can play his last NHL game at home against the St. Louis Blues on April 24. Because everyone will understand the significance, he will receive the send-off he deserves, and he will be able to soak up the moment.

It’s funny to think back to the morning of the 2003 NHL Draft, as Getzlaf’s father, Steve, did at the press conference Tuesday. Steve asked Ryan which team he wanted to go to. Ryan said maybe the Toronto Maple Leafs. Steve told him that wouldn’t happen, because the Maple Leafs didn’t have a first-round pick.

Well, everything worked out then, didn’t it?

Though he never won a major NHL award, he came close: In 2013-14, he was runner-up to Pittsburgh Penguins center Sidney Crosby for the Hart Trophy, which goes to the most valuable player as voted by the Professional Hockey Writers Association.

“I’ve been able to live out that dream of being a hockey player and winning a Stanley Cup here in Anaheim,” Getzlaf said.

Getzlaf didn’t need to go anywhere else and didn’t want to, even though he had the chance.

Contenders were interested in acquiring him before the 2021 NHL Trade Deadline, when he was eligible to become an unrestricted free agent after the season and the Ducks were about to miss the playoffs for the third straight season. He and his wife, Paige, had control because of a no-move clause in his contract.

“To tell you the honest truth, last year’s trade deadline was one of the hardest two days of my life,” Getzlaf said. “Me and Paige stayed up long nights talking about it, and ultimately the decision to stay here was based on the loyalty this organization has shown me over the years, and it just didn’t feel right to go anywhere.”

What Getzlaf has in Anaheim is to be cherished, as he knows.

Getzlaf singled out one former teammate Tuesday: his best friend, Corey Perry. Getzlaf and Perry played together from 2005-19, before Perry bounced to the Dallas Stars, Montreal Canadiens and Tampa Bay Lightning as an unrestricted free agent.

“We started together on this journey, and it would have been great to finish this way, but obviously our business is what it is,” Getzlaf said.

It remains to be seen whether Getzlaf will make the Hockey Hall of Fame. Bryan Hayward, the former NHL goalie who is now the Ducks TV analyst, made a not-so-subtle case for him Tuesday, pointing out some facts in his favor.

Getzlaf won gold with Canada at the 2010 Vancouver Olympics and the 2014 Sochi Olympics. Twelve others have won the Cup and two Olympic gold medals. Six are retired, and all are in the Hall: Martin Brodeur, Viacheslav Fetisov, Peter Forsberg, Igor Larionov, Scott Niedermayer and Chris Pronger.

Of the 29 retired players who scored their first 1,000 points with the same team, 26 are in the Hall.

Whatever happens with the Hall of Fame, though, one day Getzlaf’s No. 15 should hang from the rafters at Honda Center alongside Teemu Selanne’s No. 8, Paul Kariya’s No. 9 and Niedermayer’s No. 27.

“It is clear that he will go down as one of the elite players of his era in the National Hockey League,” Hayward said, “and we are so proud that he did it all here with the Ducks.”