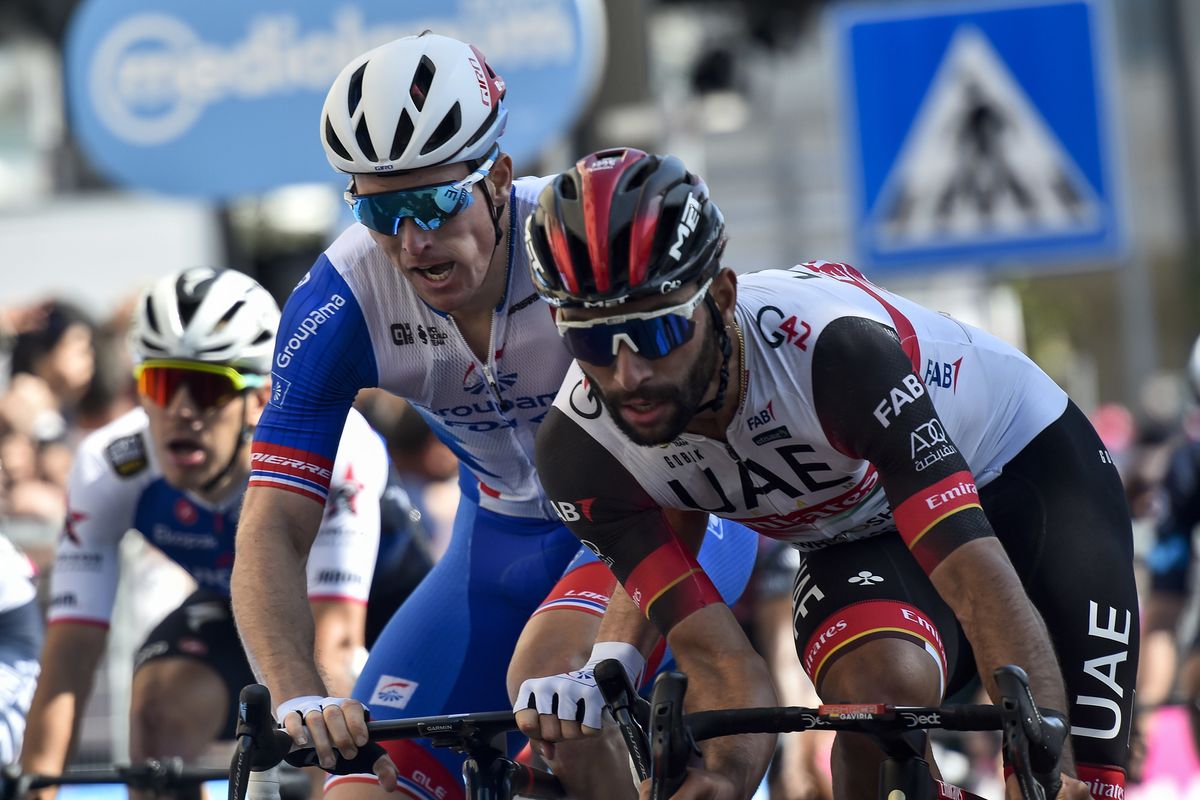 Fernando Gaviria bounced his front wheel as he crossed the line in second place on stage 5 of the Giro d’Italia and he continued to take his frustration out on his bike once stopped beyond the line, bashing his saddle with his fist.

“Che bici di merda”, meaning “what a shit bike”, the Colombian said as he was caught on camera.

Gaviria appeared to be pedaling at a high cadence as he looked to get on terms with Arnaud Démare in the finishing straight in Messina – perhaps stuck in a small gear – but he refused to go into detail about the nature of the mechanical problem.

“I can’t say anything. Because I’ll get told off. I can say absolutely nothing about the bike.”

In a separate interview with Eurosporthe added: “It’s something that I can’t say on the TV.”

Later on, UAE Team Emirates released their own statement in which Gaviria was quoted as saying he had “problems with my derailleur and I couldn’t get in the gear I needed,” speculating that “someone’s wheel may have touched me from behind.”

In his initial televised post-race interview, Gaviria insisted he “had the legs to win”, which, given he had a good run through the finishing straight, would underline the idea he felt let down by his equipment.

He also revealed that lead-out man Max Richeze was hampered by a mechanical problem of his own, when his chained dropped with a kilometer to go. That said, Gaviria soon looked to play down any sense of controversy, describing his frustration as “stupid” but also “part of racing”.

“It’s not just the bike. It’s things that happen in racing,” he said. “We didn’t have Richeze in the final – his chain came off at 1km – and we couldn’t do anything.

“The anger and the frustration is because I wanted to win. Being so close, feeling [I had] the legs, fighting for it, and losing… I didn’t like that. It’s stupid to get annoyed, but that’s racing.”

This isn’t the first time Gaviria has been hampered my mechanical misfortune at the Giro d’Italia. At last year’s race, his saddle came off in the final kilometer of stage 13, where he placed fifth.

Gaviria, who placed third on stage 2, should have another opportunity to put things right on Thursday, as stage 6 tracks a largely flat route on the Italian mainland to Scalea.