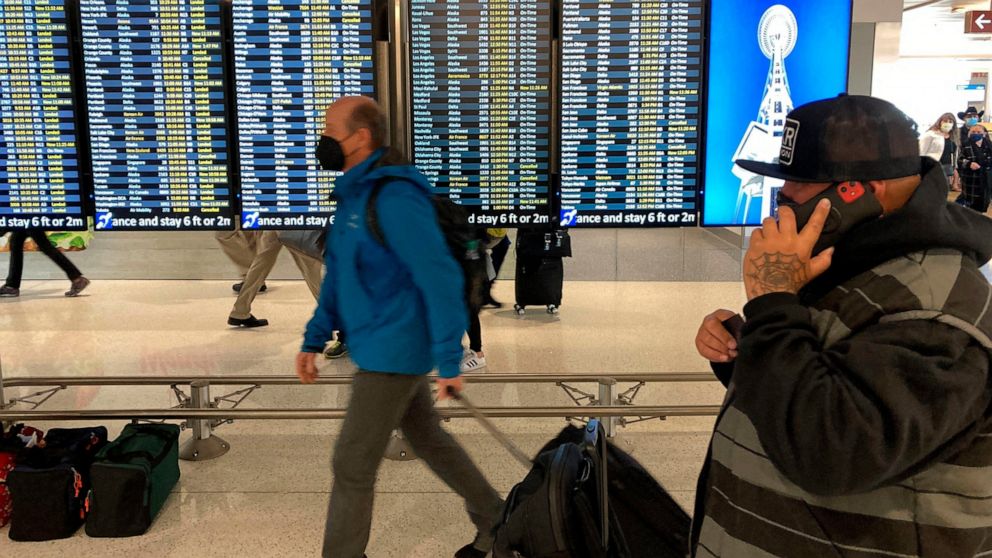 The judge’s decision freed airlines, airports and mass transit systems to make their own decisions about mask requirements, resulting in a mix of responses.

The major airlines switched to a mask optional policy, with some eliciting cheers from passengers when the changes were announced over loudspeakers. The Transportation Security Administration said Monday night that it would it will no longer enforce the mask requirement, and airports in Houston and Dallas almost immediately did away with their mandates after the TSA announcement.

Sleepy passengers on a Delta Airlines flight between Atlanta and Barcelona, ​​Spain, cheered and applauded when a flight attendant announced the news mid-flight over the ocean.

“No one’s any happier than we are,” the attendant says in a video posted by Dillon Thomas, a CBS Denver reporter, who was on the flight. She added that people who wanted to keep on their masks were encouraged to do so.

“But we’re ready to give em up,” she added. “So thank you and happy unmasking day!”

New York City’s public transit system planned to keep its mask requirement in place. The Washington Metropolitan Area Transit Authority said it would make masks optional for riders on its buses and trains.

The Association of Flight Attendants, the nation’s largest union of cabin crews, has recently taken a neutral position on the mask rule because its members are divided about the issue. On Monday, the union’s president appealed for calm on planes and in airports.

“The last thing we need for workers on the frontlines or passengers traveling today is confusion and chaos,” union leader Sara Nelson said.

Nelson said it takes airlines 24 to 48 hours to put new procedures in place and tell employees about them. She said passengers should check with airlines for updates about travel requirements.

The mask requirement covered airlines, airports, mass transit and taxis, and was the biggest vestige of pandemic restrictions that were once the norm across the country.

The decision by US District Judge Kathryn Kimball Mizelle in Tampa, an appointee of former President Donald Trump, also said the US Centers for Disease Control and Prevention failed to justify its decision and did not follow proper rulemaking procedures that left it fatally flawed.

In her 59-page ruling, Mizelle said the only remedy was to vacate the rule entirely across the country because it would be impossible to end it for the limited group of people who objected in the lawsuit.

The judge said “a limited remedy would be no remedy at all” and courts have full authority to make a decision such as this — even if the CDC’s goals in fighting the virus are laudable.

The White House said the court ruling means that for now the mask order “is not in effect at this time.”

The CDC had recently extended the mask mandate, which was set to expire Monday, until May 3 to allow more time to study the BA.2 omicron subvariant of the coronavirus now responsible for the vast majority of cases in the US

The MTA operates New York City buses and subway trains as well as two commuter rail lines. Face coverings have been mandatory on all trains and buses since early in the pandemic.

United Airlines said in a statement that, effective immediately, masks would no longer be required on domestic flights or certain international flights.

“While this means that our employees are no longer required to wear a mask – and no longer have to enforce a mask requirement for most of the flying public – they will be able to wear masks if they choose to do so, as the CDC continues to strongly recommend wearing a mask on public transit,” United said.

The federal mask requirement for travelers was the target of months of lobbying from the airlines, which sought to kill it. The carriers argued that effective air filters on modern planes make transmission of the virus during a flight highly unlikely. Republicans in Congress also fought to kill the mandate.

Critics have seized on the fact that states have rolled back rules requiring masks in restaurants, stores and other indoor settings, and yet COVID-19 cases have fallen sharply since the omicron variant peaked in mid-January.

There have been a series of violent incidents on aircraft that have mainly been attributed to disputes over the mask-wearing requirements.

The lawsuit was filed in July 2021 by two plaintiffs and the Health Freedom Defense Fund, described in the judge’s order as a nonprofit group that “opposes laws and regulations that force individuals to submit to the administration of medical products, procedures and devices against their will .”

Republican Florida Gov. Ron DeSantis, who was not directly involved in the case but has battled against many government coronavirus requirements, praised the ruling in a statement on Twitter.

“Great to see a federal judge in Florida follow the law and reject the Biden transportation mask mandate. Both airline employees and passengers deserve to have this misery end,” DeSantis tweeted.

Associated Press writers David Koenig in Dallas, Michael Balsamo and Will Weissert in Washington, and Karen Matthews in New York contributed to this story.