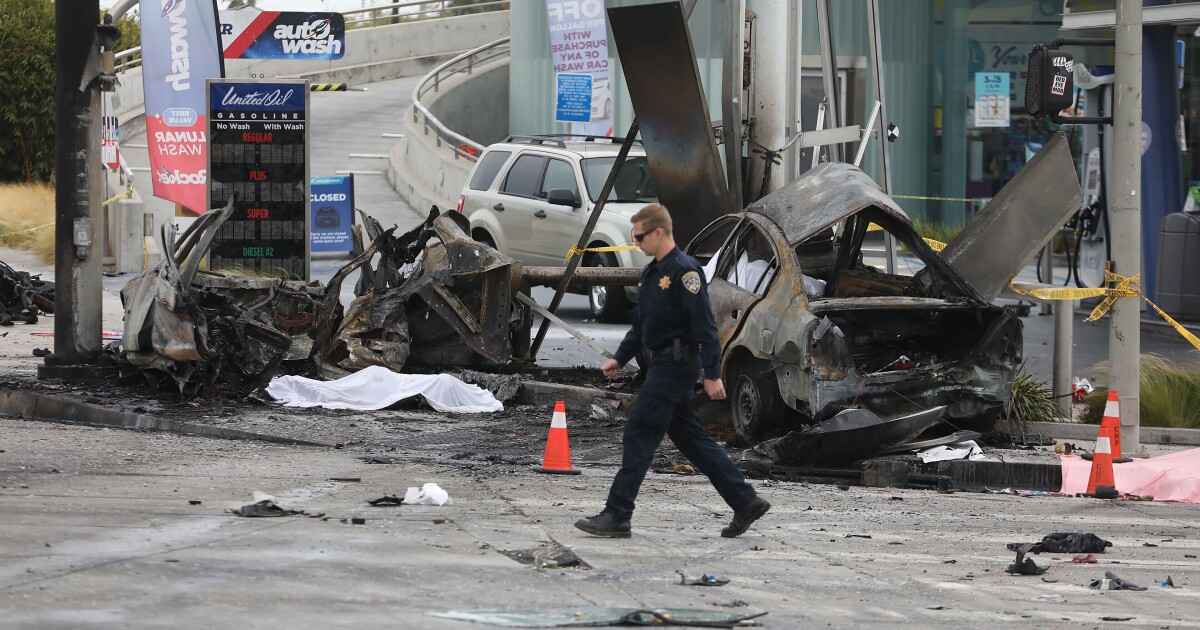 A fiery multi-car crash left five dead, including a pregnant woman and an infant, in Los Angeles’ Windsor Hills neighborhood Thursday, according to authorities.

Eight people were also injured in the crash at La Brea and Slauson avenues. The LA County Fire Department responded to the crash just after 1:40 pm

Officer Franco Pepi, a California Highway Patrol spokesperson, said Thursday afternoon that three adults, including a pregnant woman, and an infant were killed in the crash.

Authorities later found another person’s remains inside one of the burned vehicles, he said. That person’s gender or age weren’t known Thursday night.

The pregnant woman also lost her unborn child, which the CHP was counting as an additional fatality “due to rare circumstances,” Pepi said.

Authorities took eight people to Ronald Reagan UCLA Medical Center for treatment, he said. Of those injured, six were teens and one suffered major injuries.

Surveillance video of the crash shows a Mercedes-Benz barreling down La Brea at high speed as dozens of cars cross the intersection on Slauson. The Mercedes runs a red light and slams into cars in the intersection, then bursts into flames and hurtles into a light pole, where it comes to rest.

After the crash, a streak of fire burns on the ground.

Smoke could be seen billowing from miles away.

A woman who did not want to be named told The Times a Mercedes-Benz hit her car as she was leaving a United Oil gas station.

“I was getting out, had got gas,” she said. “All of a sudden that Mercedes is coming at me on … fire. I didn’t have any time to think about it. It hits my car. I veered, hit the bench on the side.”

The crash caused her to fear a gasoline-fueled explosion, she told The Times.

Nearby, the wrecked Mercedes-Benz with a smashed hood had crashed into a curb.

Investigators believe the driver of the Mercedes-Benz was responsible for the crash, Pepi said.

The cause of the crash was not immediately known, but the CHP spokesperson said investigators determined the Mercedes was traveling “at a high rate of speed” and ran a red light while traveling southbound on La Brea.

The driver has been identified only as a female adult, Pepi said.

The woman was hospitalized but was conscious and speaking with CHP investigators Thursday night, he said, adding that he did not know the extent of her injuries.

At least six vehicles were involved in the crash, three of which were engulfed in flames, Pepi said. The others sustained moderate damage.