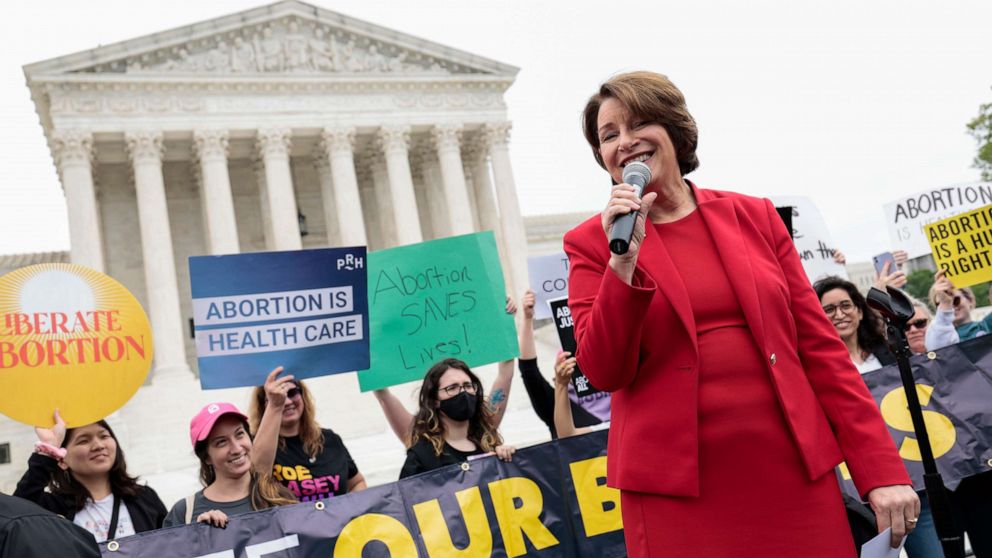 She said a new generation of women will see their rights diminished.

When it comes to abortion protections “the fall will be swift” if the Supreme Court overturns Roe v. Wade, Sen. Amy Klobuchar said Sunday, adding that the Senate will do everything it can to codify a woman’s right to choose.

“With this leaked opinion, the court is looking at reversing 50 years of women’s rights” Klobuchar, D-Minn., told ABC “This Week” co-anchor Martha Raddatz.

On Tuesday, Chief Justice Roberts confirmed a leaked draft opinion of a Supreme Court ruling indicating that a conservative majority of justices are poised to overturn Roe v. Wade.

The bombshell that the high court could soon overturn the landmark case sparked outrage across the country, including from elected leaders.

Senate Majority Leader Chuck Schumer announced that the Senate would hold a vote in the coming week to codify federal abortion protections by way of the Women’s Health Protection Act, but not enough votes are expected for the measure to pass. To overcome a filibuster, the bill — which passed the House but has been stalled in the Senate — needs support from 60 members of Congress.

“If we are not successful then we go to the ballot box,” Klobuchar said of the bill. “We march straight to the ballot box and the women of this country and the men who stand with them will vote like they’ve never voted before.”

All House Democrats except for Rep. Henry Cuellar, D-Texas, voted for the Women’s Health Protection Act.

Raddatz pressed Klobuchar on whether the Democratic Party should only back members and candidates who support abortion rights.

“Do you believe there should be a litmus test?” Raddatz asked. “The Democrats have several candidates who do not support abortion rights.”

“You have people who are personally, personally pro-life, but yet believe that that decision should be a woman’s personal choice, even if they may not agree with them,” Klobuchar responded. “So I think it’s important to note that we have people in our party that vote to uphold Roe v. Wade that may have personal opinions that are different.”

The Minnesota senator added that the Democratic Party is “clearly pro-choice.”

“That is the position of our party and I think you see in primary after primary, that matters to our voters — certainly now more than ever,” she said.

While she said abortion will not be the “only issue” for Democrats in the midterm elections — adding that voters are also focused on the economy and Ukraine — she said “a new generation of women” are seeing their rights pulled back and saying “wait a minute, my mom and my grandma are going to have more rights than I’m going to have going forward?”

Raddatz pressed Klobuchar on public polls showing that while a majority of Americans support the right to an abortion in most cases, within the states that would almost immediately ban abortion if Roe is overturned, a majority of adults believe abortion should be illegal in most or all boxes.

“Why should a woman in Texas have different rights and a different future and a different ability to make decisions about her body and her reproductive choices than a woman in Minnesota?” Klobuchar responded. “How can that be in this country, that we’d have a patchwork of laws?”

Klobuchar added that a reversal of Roe v. Wade would disproportionately affect poor women and women of color.

“This is just wrong, and that is part of why Justice [Harry] Blackmun, who is a Republican-appointed Justice, no less, made that thoughtful decision, looked at the Constitution and said, the right to privacy includes the right for women to make a choice like this.”