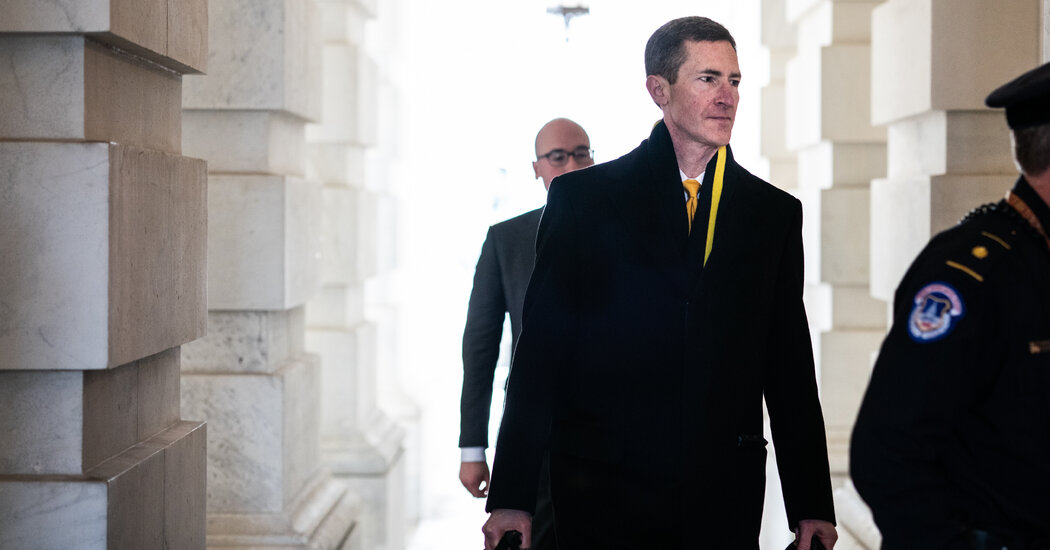 Pat A. Cipollone and Patrick F. Philbin, the White House counsel and his deputy under President Donald J. Trump, were interviewed by the FBI in connection with boxes of sensitive documents that were stored at Mr. Trump’s residence in Florida after he left office , three people familiar with the matter said.

Mr. Cipollone and Mr. Philbin are the most senior people who worked for Mr. Trump who are known to have been interviewed by investigators after the National Archives referred the matter to the Justice Department this year. The interviews are a sign of the intensity of the investigation into how sensitive government material left the White House with Mr. Trump and remained at his Palm Beach, Fla., residence, Mar-a-Lago, for more than a year.

Mr. Philbin was interviewed in the spring, according to two of the people familiar with the matter, as investigators reached out to members of Mr. Trump’s circle to find out how 15 boxes of material — some of it marked as classified — made its way to Mar-a-Lago. It was unclear when Mr. Cipollone was interviewed.

Mr. Cipollone and Mr. Philbin were two of Mr. Trump’s representatives to deal with the National Archives; they were named to the positions shortly before the president’s term ended, in January 2021. Another was Mark Meadows, the former White House chief of staff.

At some point after National Archives officials realized they did not have Trump White House documents, which are required to be preserved under the Presidential Records Act, they contacted Mr. Philbin for help returning them.

More Coverage of the FBI Search of Trump’s Home

A spokesperson for Mr. Philbin did not immediately respond to a request for comment.

Mr. Philbin tried to help the National Archives retrieve the material, two of the people familiar with the discussions said. But the former president repeatedly resisted entreaties from his advisers.

“It’s not theirs, it’s mine,” several advisers say Mr. Trump told them.

Among the items in the boxes packed up from the White House residence as Mr. Trump was departing was Mr. Trump’s correspondence with the North Korean dictator Kim Jong-un, as well as a letter to Mr. Trump from former President Barack Obama when Mr Obama left the White House.

But there was also a variety of other documents that traveled to Mar-a-Lago.

The former president returned 15 boxes of material to the National Archives in January, but the Justice Department issued a subpoena in May for documents that it believed were still at his club. On June 3, counterintelligence officials with the Justice Department’s national security division went to Mar-a-Lago to collect remaining documents with classified markings.

Evan Corcoran, a lawyer for Mr. Trump who was said to have suggested that the former president resolve the matter with the Justice Department, went through the material, which was kept in boxes in a storage area in the basement, before that meeting, according to people familiar with the move. It was unclear if he was the only one to do so.

At that point, at least one Trump lawyer signed a statement saying material with the classified markings had been returned, according to four people familiar with the document, although it was not clear specifically what the statement attested to. The two lawyers on site for the meeting who worked with Mr. Trump were Mr. Corcoran and Christina Bobb.

But officials then used a subpoena to obtain surveillance footage of the hallway outside a storage room at Mar-a-Lago and saw something that alarmed them. They also received information from at least one witness who indicated that more material might remain at the residence, people familiar with the investigation said.

Mr. Philbin is among eight people who work or used to work for Mr. Trump who have been contacted by the FBI since a grand jury was formed this year. Investigators also interviewed Derek Lyons, a former White House staff secretary.

Mr. Lyons’s last day at the White House was Dec. 18, 2020, meaning he did not know how the last boxes were packed as Mr. Trump prepared to leave. But he had information about paper flow in the White House and how the former president handled material.

The FBI has reached out to about a half-dozen people who currently work for Mr. Trump and who might know what documents he may still have in his possession.