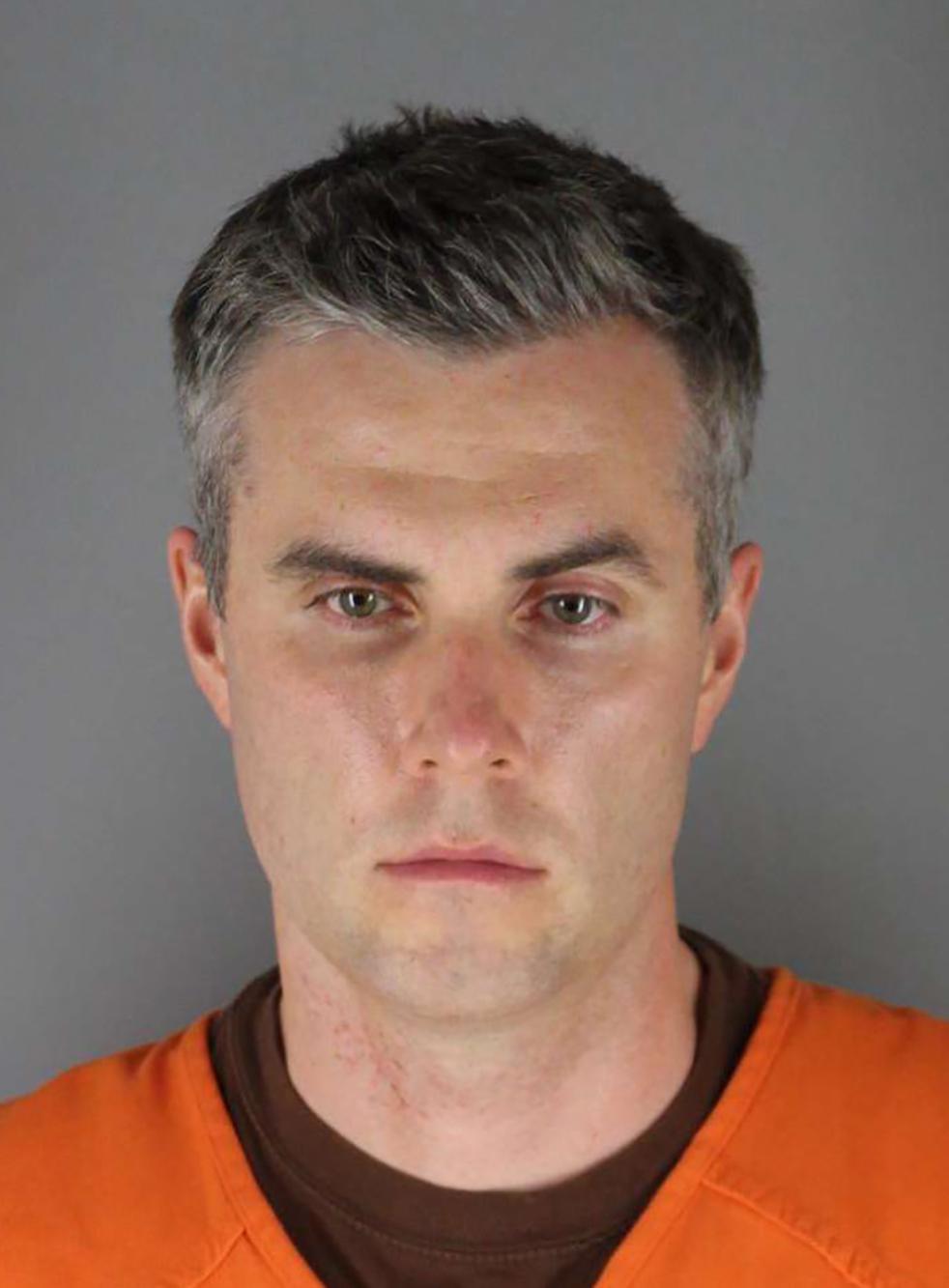 FILE – This photo provided by the Hennepin County Sheriff’s Office in Minnesota on June 3, 2020, shows Thomas Lane. Lane former Minneapolis police officer pleaded guilty Wednesday, May 18,2022 to a state charge of aiding and abetting second-degree manslaughter in the killing of George Floyd. As part of the plea deal, Thomas Lane will have a count of aiding and abetting second-degree unintentional murder dismissed.(Hennepin County Sheriff’s Office via AP, File)

FILE – This photo provided by the Hennepin County Sheriff’s Office in Minnesota on June 3, 2020, shows Thomas Lane. Lane former Minneapolis police officer pleaded guilty Wednesday, May 18,2022 to a state charge of aiding and abetting second-degree manslaughter in the killing of George Floyd. As part of the plea deal, Thomas Lane will have a count of aiding and abetting second-degree unintentional murder dismissed.(Hennepin County Sheriff’s Office via AP, File)

MINNEAPOLIS (AP) — A former Minneapolis police officer pleaded guilty Wednesday to a state charge of aiding and abetting second-degree manslaughter in the killing of George Floydadmitting that he intentionally helped restrain the Black man in a way that created an unreasonable risk and caused his death.

As part of Thomas Lane’s plea agreement, a more serious count of aiding and abetting second-degree unintentional murder will be dismissed. Lane and former Officers J. Alexander Kueng and Tou Thao have already been convicted on federal counts of willfully violating Floyd’s rights. While they have yet to be sentenced on the federal charges, Lane’s change of plea means he will avoid what could have been a lengthy state sentence if he was convicted of the murder charge.

The guilty plea comes a week before the two-year anniversary of Floyd’s May 25, 2020, killing. Floyd, 46, died after Officer Derek Chauvin, who is white, pinned him to the ground with a knee on Floyd’s neck as Floyd repeatedly said he couldn’t breathe. The killing, captured on widely viewed bystander video, sparked protests in Minneapolis and around the globe as part of a reckoning over racial injustice.

Lane, who is white, and Kueng, who is Black, helped restrain Floyd, who was handcuffed. Lane held down Floyd’s legs and Kueng knelt on Floyd’s back. Thao, who is Hmong American, kept bystanders from intervening during the 9 1/2-minute restraint.

All three are free on bond; the state trial scheduled for June is expected to proceed for Kueng and Thao.

Lane is scheduled to be sentenced on the state charge Sept. 21.

In his plea agreement, Lane admitted that he knew from his training that restraining Floyd in that way created a serious risk of death, and that he heard Floyd say he couldn’t breathe, knew Floyd fell silent, had no pulse and appeared to have lost consciousness.

The plea agreement says Lane knew Floyd should have been rolled onto his side — and evidence shows he asked twice if that should be done — but he continued to assist in the restraint despite the risk. Lane agreed the restraint was “unreasonable under the circumstances and constituted an unlawful use of force.”

The state and Lane’s attorneys agreed to a recommended sentence of three years — which is below state sentencing guidelines — and prosecutors agreed to allow him to serve that penalty at the same time as any federal sentence, and in a federal prison. One legal expert said this would appeal to Lane because he would have less chance of being incarcerated with people he had arrested.

Lane, who is white, told Judge Peter Cahill that he understood the agreement. When asked how he would plead, he said: “Guilty, your honor.”

Attorney General Keith Ellison, whose office prosecuted the case, issued a statement saying he was pleased that Lane accepted responsibility.

“His acknowledgment he did something wrong is an important step toward healing the wounds of the Floyd family, our community, and the nation,” Ellison said. “While accountability is not justice, this is a significant moment in this case and a necessary resolution on our continued journey to justice.”

“He has a newborn baby and did not want to risk not being part of the child’s life,” Gray said.

Wednesday’s hearing was streamed over Zoom for Floyd’s family members. Their attorneys issued a statement afterward, saying Lane’s plea “reflects a certain level of accountability,” but that it came only after his federal conviction.

“Hopefully, this plea helps usher in a new era where officers understand that juries will hold them accountable, just as they would any other citizen,” family attorneys Ben Crump, Jeff Storms and Antonio Romanucci said. “Perhaps soon, officers will not require families to endure the pain of lengthy court proceedings where their criminal acts are obvious and apparent.”

Chauvin pleaded guilty last year to a federal charge of violating Floyd’s civil rights and faces a federal sentence ranging from 20 to 25 years. The former officer earlier was convicted of state charges of murder and manslaughter and is currently serving 22 1/2 years in the state case.

Lane’s plea comes as the country is focused on the killing of 10 Black people in Buffalo, New Yorkby an 18-year-old white man, who carried out the racist, livestreamed shooting Saturday in a supermarket.

Lane, Kueng and Thao were convicted of federal charges in February after a monthlong trial that focused on the officers’ training and the culture of the police department. All three were convicted of depriving Floyd of his right to medical care and Thao and Kueng were also convicted of failing to intervene to stop Chauvin during the killing.

After their federal conviction, there was a question as to whether the state trial would proceed. At an April hearing in state court, prosecutors revealed that they had offered plea deals to all three men, but they were rejected. At the time, Gray said it was hard for the defense to negotiate when the three still don’t know what their federal sentences would be.

Rachel Moran, a law professor at the University of St. Thomas, said it’s possible Lane received a better offer, though the public doesn’t know what happened behind the scenes. As for the other officers, she said Lane’s guilty plea has “got to make them think.”

“Particularly when I think most people would conceive of Thomas Lane as the least culpable of the three — and he’s the one pleading guilty,” Moran said. “Now if you are one of the other two left standing, it might change your position. … They may have less appealing offers to work with, but it still puts pressure on them.”

It’s still not clear what federal sentence Lane and the others could face. Many factors go into determining a federal sentence; One legal expert told the AP earlier this year that a federal penalty could range anywhere from five to 25 years. Federal sentencing dates have not been set.

Under state sentencing guidelines, a person with no criminal record could face a sentence ranging from just under 3 1/2 years to four years and nine months in prison for second-degree unintentional manslaughter, with the presumptive sentence being four years. Lane’s recommended sentence of three years, which still must be approved by the judge, would be five months less than the low range.

If Lane had been convicted of aiding and abetting second-degree murder, he would have faced a presumptive 12 1/2 years in prison. And prosecutors served notice in 2020 that they intended to seek longer sentences for Lane, Kueng and Thao — as they did for Chauvin.

Baker said a guilty plea makes sense and he would not be surprised if at least one of the other former officers also took a deal.

An attorney for Thao, Robert Paule, was in the courtroom for Lane’s plea hearing. When asked if his client would also plead guilty, he replied “No comment.”

Storms, one of the Floyd family attorneys, said the deal with Lane happened “very quickly.” When asked if he knew of any other possible negotiations with Thao or Kueng, he declined to comment on that, but said: “I think the family is hopeful, now that a state and federal jury have spoken, that the other officers will voluntarily be held accountable.”

Mohamed Ibrahim is a corps member for the Associated Press/Report for America Statehouse News Initiative. Report for America is a nonprofit national service program that places journalists in local newsrooms to report on undercovered issues.

Find AP’s full coverage of the death of George Floyd at: https://apnews.com/hub/death-of-george-floyd