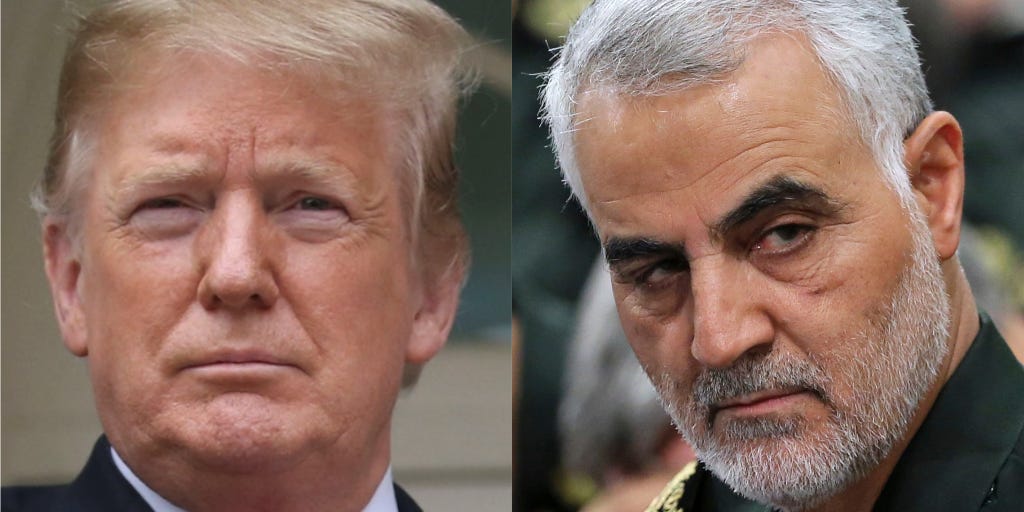 Former Secretary of Defense Mark Esper revealed in his newly-released memoir that allies of former President Donald Trump complained that he was “not loyal” after he did not back the former president’s 2020 allegations that slain Iranian Gen. Qassem Soleimani had sought to target four US embassies for attack.

In his new book, “A Sacred Oath: Memoirs of a Secretary of Defense During Extraordinary Times,” Esper — who served under Trump as Army secretary from 2017 to 2019 and in his aforementioned role as the Pentagon chief from 2019 until his November 2020 termination by the then-president — said his intelligence briefings did not indicate that Soleimani was specifically eyeing four embassies.

While Esper was concerned about potential attacks, he didn’t feel comfortable backing up Trump’s assertions, which he detailed in the book — charging that the former president displayed a pattern of dishonesty.

“The simple fact was that Trump usually exaggerated and often made statements that could not be confirmed; others were outright fabrications. I became ensnared in one of those rhetorical webs on a Sunday morning talk show,” the former defense chief wrote.

On January 10, just days after Soleimani had been killed by the US, “Trump told Fox News that Soleimani planned to attack several diplomatic posts in the Middle East, remarking, ‘I can reveal that I believe it probably would’ve been four embassies .’ Not long before that, [Mike] Pompeo had told the media the United States didn’t know when or where the attacks might occur, but acknowledged that embassies were threatened,” he wrote.

“This was consistent with my understanding of the intelligence, the reports I was receiving, and precautionary actions we were taking,” Esper continued. “Embassy Baghdad was obviously under threat, and State had enough concerns about Embassy Beirut that we reinforced that site as well. In addition, as I mentioned earlier, the safety of our embassies in Kuwait and Bahrain concerned me.”

The former defense secretary reiterated that while he agreed that there were still clear threats against embassies, Trump’s claims about the four sites couldn’t be supported, per reports that intelligence officials had seen.

“I didn’t recall any specific mention of four sites in my briefings and reports from the CIA,” he wrote. “Therefore, when I first appeared on CNN on Sunday, January 12, I made two things clear: first, that I hadn’t seen any specific evidence with regard to the targeting of four embassies; and second, that I still believed there were threats against multiple embassies, noting that we had reinforced earlier diplomatic posts.”

He added: “Regardless, my unwillingness to affirm Trump’s specific claim that the intelligence said Soleimani targeted four embassies plunged me into hot water with the president. A trusted colleague told me that some of Trump’s friends called to report on me, complaining that I was ‘undermining’ him and ‘not loyal,’ and even suggested he ‘fire Esper’ … for being honest.”

During Esper’s January 2020 appearance on the CBS News program “Face the Nation,” the then-Defense secretary said that he “didn’t see” anything in reports indicating that four embassies would be targeted, but still had the expectation that Iran “was going to go after our embassies.”

Soleimani was killed by a US drone strike near Iraq’s Baghdad International Airport in January 2020. Trump was adamant that the threat to multiple embassies forced his hand in ordering the strike that eventually took down the longtime Iranian security and intelligence commander.

The Trump administration never publicly provided clear evidence to support its claim that Soleimani posed an imminent threat to US personnel in the region and offered shifting justifications for the strike in the aftermath as congressional lawmakers questioned its legality.

Soleimani was Iran’s top general, the leader of the Iranian Revolutionary Guard Corps’ (IRGC) elite Quds force, and was widely considered the second most powerful person in the country after Iranian Supreme Leader Ayatollah Ali Khamenei. His death came amid a period of heightened tensions between Washington and Tehran — linked to Trump’s controversial decision to withdraw from the 2015 Iran nuclear deal — and pushed the US and Iran to the brink of war.

Iran retaliated with missile attacks on US forces in Iraq, which injured dozens. But both sides ultimately backed away from a broader conflict. The dynamic between the US and Iran remains contentious, which has impacted the Biden administration’s efforts to revive the Iran nuclear deal. Trump withdrew from the Obama-era deal in May 2018, a move that saw US-Iran relations rapidly deteriorate.

A representative for Trump did not immediately respond to a request for comment from Insider.