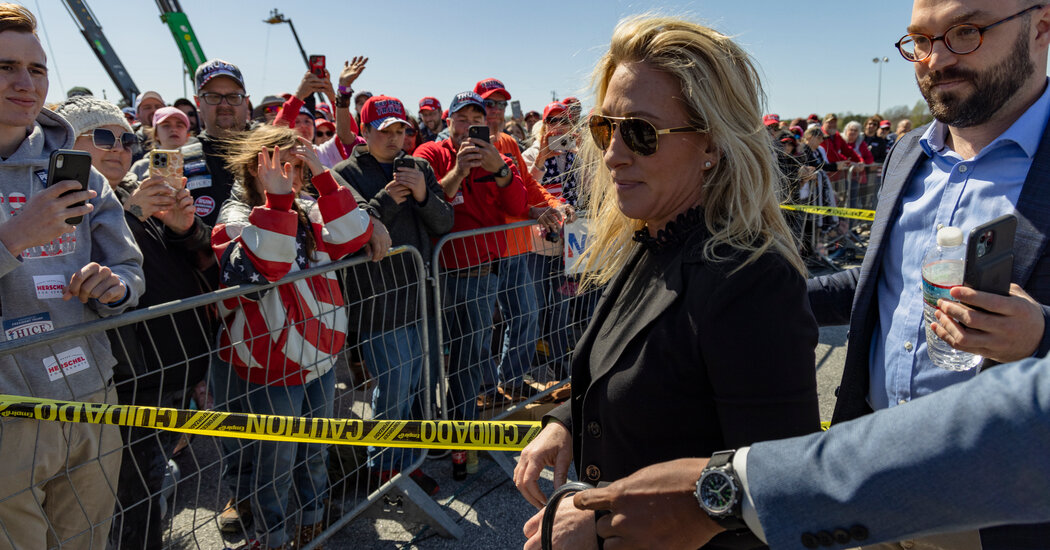 A federal judge cleared the way on Monday for a group of Georgia voters to move forward with legal efforts seeking to disqualify Representative Marjorie Taylor Greene from running for re-election to Congress, citing her role in the Jan. 6, 2021, attack on the Capitol.

The disqualification effort is based on a constitutional provision adopted after the Civil War that barred members of the Confederacy from holding office. It mirrors several other cases involving Republican members of Congress, whose roles leading up to and during the deadly riot have drawn intense criticism.

The judge, Amy Totenberg, who was appointed to the US District Court for the Northern District of Georgia by President Barack Obama, denied Ms. Greene’s request for a preliminary injunction and temporary restraining order in the high-profile legal feud.

Ms. Greene, 47, who is known for her unflinching loyalty to former President Donald J. Trump and for her clashes with Democrats, has steadfastly denied that she aided and engaged in the attack on the Capitol.

In the 73-page ruling, Judge Totenberg wrote that Ms. Greene had failed to meet the “burden of persuasion” in her request for injunctive relief, which she called an extraordinary and drastic remedy.

“This case involves a whirlpool of colliding constitutional interests of public import,” Judge Totenberg wrote. “The novelty of the factual and historical posture of this case — especially when assessed in the context of a preliminary injunction motion reviewed on a fast track — has made resolution of the complex legal issues at stake here particularly demanding.”

James Bopp Jr., a lawyer for Ms. Greene, said on Monday night that the ruling was flawed and minimized the adverse effect that the disqualification effort was having on Ms. Greene’s right to run for office.

“This is fundamentally antidemocratic,” Mr. Bopp said, maintaining that Ms. Greene had “publicly and vigorously condemned the attack on the Capitol.”

He called the effort to remove her from the ballot part of a well-funded nationwide effort to strip voters of their right to vote for candidates of their choice, with elections determined by “bureaucrats, judges, lawyers and clever legal arguments.”

In her request for an injunction, Ms. Greene argued that it would be impossible to fully resolve the case before Georgia holds its primary elections on May 24. Absentee ballots will start to be mailed on April 25, Ms. Greene’s motion said.

In the ruling, Judge Totenberg determined that Ms. Greene had failed to prove that there was a strong likelihood that she would prevail on the merits of her legal claims. A state administrative judge is scheduled to hear the case on Friday.

The decision by Judge Totenberg stood in stark contrast with a recent ruling in a similar case involving Representative Madison Cawthorn in North Carolina. In blocking that disqualification effort, US District Judge Richard E. Myers II, an appointee of Mr. Trump, ruled that the 14th Amendment of the Constitution narrowly applied to members of the Confederacy after the Civil War.

Ms. Greene’s critics have said that she frequently referred to efforts to challenge the 2020 presidential election results as “our 1776 moment” in public comments that led up to the riot at the Capitol. They contend that the phrase was a code used to incite violence, and point to the third section of the 14th Amendment in their argument to drop her from the ballot.

Debating a criminal referral. TheJan. 6 House committee has grown divided over whether to make a criminal referral of former President Donald J. Trump to the Justice Department, even though it has concluded that it has enough evidence to do so. The debate centers on whether a referral would backfire by politically tainting the expanding federal investigation.

Continuing election doubts. More than a year after they tried and failed to use Congress’s final count of electoral votes on Jan. 6 to overturn the election, some Trump allies are pushing bogus legal theories about “decertifying” the 2020 vote and continuing to fuel a false narrative that has resonated with Mr. Trump’s supporters.

The constitutional challenge to Ms. Greene’s candidacy, filed last month with Georgia’s secretary of state, argued that Ms. Greene had helped to plan the attack on the Capitol or knew that a demonstration organized by Mr. Trump and his supporters on the National Mall would escalate into violence.

The group pursuing the case is represented by Free Speech for People, a nonpartisan, nonprofit legal advocacy organization with constitutional law expertise, which was also involved in the case involving Mr. Cawthorn.

Ron Fein, the legal director for Free Speech for People, heralded the ruling on Monday night in an email to The New York Times.

“Judge Totenberg’s well-reasoned opinion explains why the Georgia voters who filed this challenge against Greene have the right to have their challenge heard, and why none of Greene’s objections to the Georgia state challenge have any merit,” Mr. Fein said. “At the hearing on Friday, we look forward to questioning Greene under oath about her involvement in the events of Jan. 6, and to demonstrate how her facilitation of the insurrection disqualifies her from public office under the United States Constitution.”

Last year, the House removed Ms. Greene from the Education and Budget Committees for endorsing the executions of Democrats and spreading dangerous and bigoted misinformation. The move—supported by the majority of Democrats and opposed nearly unanimously by Republicans—diminished Ms. Greene’s influence in the chamber.

More recently, Ms. Greene filed a threat report with the Capitol Police after the late-night television show host and comedian Jimmy Kimmel mocked her in a monologue. When Mr. Kimmel mentioned Ms. Greene’s barbs toward three Republican senators who voted to confirm Judge Ketanji Brown Jackson to the Supreme Court, he said, “Wow, where is Will Smith when you really need him?”