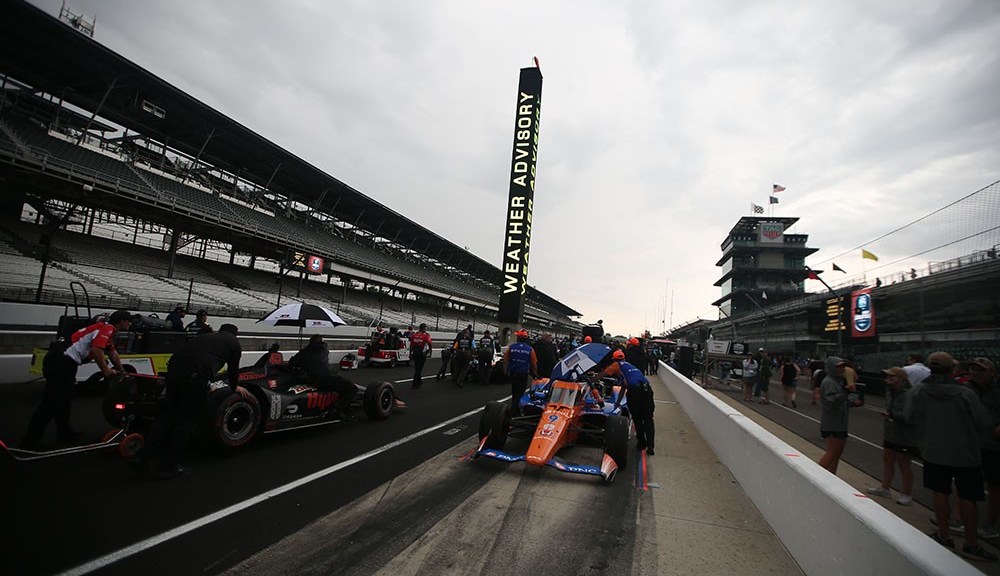 Hondas hiccupped, a gearbox broke, a motor buzzed, a wall was hit, someone had a bad technical trip, and then rain made for a problematic first day of Indy 500 qualifying on Saturday.

The drama started with news from IndyCar technical inspection garage where Juan Pablo Montoya’s No. 6 Arrow McLaren SP Chevy failed during its pass across the verification pad. The team reported the failure was due to a “broken component” and as a result of the issue lost their guaranteed qualifying run which was scheduled to take place ninth in the draw. Per the rules, Montoya would need to wait until the other 32 drivers completed their runs before being able to perform his own. When the two-time Indy 500 winner got his turn, higher temperatures and a lack of speed left him sitting 29th on the grid.

Where Montoya was ready to go but had to wait to run, Stefan Wilson and the Cusick Motorsports/DragonSpeed ​​team weren’t as fortunate as a transmission issue — second and third gears were mistakenly swapped – in the morning practice session led to a big over -rev that damaged the No. 25’s Chevy engine. Fearing imminent failure in the 2.2-liter twin-turbo V6, an engine change was made which forced the team to miss its qualifying spot and join Montoya at the bottom of the list.

Thanks to a few delays in the motor swap and the arrival of rain, the day ended with Wilson holding the distinction of being the only driver whose car did not make the trip from Gasoline Alley to perform a qualifying run; he will start 33rd and last.

Marco Andretti, the 10th driver to qualify, had a strange occurrence on the second lap of his run as the car lost power, dropping from a first lap of 230mph to 219mph. Although he recovered somewhat on the third and fourth laps, his average was a disappointing 226.108mph, which left the 2020 Indy 500 polesitter at the bottom of the grid with an average of 226.108mph.

Making matters worse, Andretti was slowed by Takuma Sato who remained on the track during his cooldown lap instead of moving to the warmup lane entering Turn 3. Andretti was infuriated by finding Sato at half-speed in front of him while trying to ramp up the No. 98 Honda on the run to the green flag.

“Starting the lap on the brakes because Sato stopped in the middle of [Turn] 3… To start a run on the brakes – I don’t think it’s very fair,” Andretti said. “And then electronically…we need to figure out what happened electronically. It’s a nightmare right now.”

Making a second run later in the day, Andretti improved to 22nd with an average of 230.345mph.

Andretti Autosport stablemate Colton Herta had another engine issue — one that was comparatively dire — as he was getting ready to perform his run, but was forced to abandon the attempt as the motor produced troubling sounds as he entered Turn 1.

“I think that might be the engine going,” Herta said. It’s believed Herta’s 2.2-liter twin-turbo V6 engine dropped a valve; a fresh motor was required to make another attempt. Swift work by his Andretti mechanics had the car out for an attempt that placed Herta 24th at 230.235mph.

The 18th qualifier of the day was on the way to a solid qualifying performance, but when the rear of Helio Castroneves’ No. 06 Meyer Shank Racing Honda tried to beat the front into the corner on his final lap, a big lift was required to keep the car pointed in the right direction.

“The car is way, way too loose,” Castroneves said.

With a drop from a 229mph on lap three to 212mph on lap four, the defending Indy 500 winner was left holding an average of 225.482mph; the slowest in the field at that point. Another run of 229.630mph slightly improved the 2021 race winner’s fortunes. That’s assuming starting 26th is considered a meaningful improvement…

Next, Sato was penalized by IndyCar for impeding Andretti and had his speed voided. Venturing out for a new run, Sato understeered off of Turn 2 and hit the SAFER barrier with his right-rear corner, but kept motoring and was rewarded with P12 at 231.708mph.

The final moments of drama came when Sage Karam was on track and ready to try and improve his speed and rain began to fall. After an hour-long delay, Karam was able to start another run and secured 21st at 230.464mph. Directly behind him in line at the time of the rain delay was Scott McLaughlin, who became the last qualifier of the day with a 230.154mph run that was only good enough for 25th.

Teammate Josef Newgarden, who also pulled his qualifying speed to use the fast lane to quickly get on track, was unable to start a run due to the return of rainfall with just under two hours left on the clock.

IndyCar is set to restore Newgarden’s speed as the day’s running was called at 4:50 pm local time.