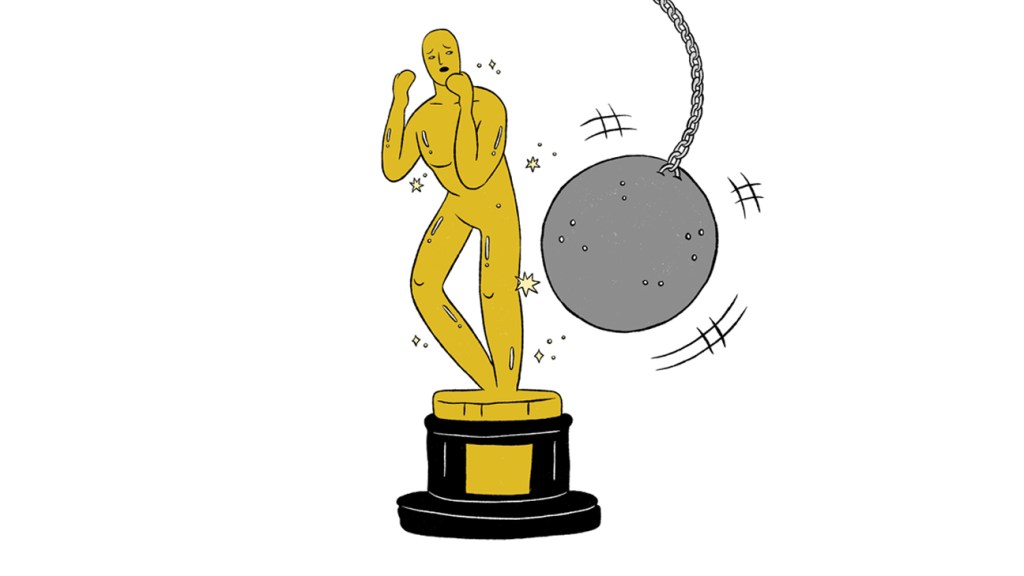 The Academy has been kowtowing to ABC since Tom Sherak expanded the best picture category after the so-called “snub” of The Dark Knight and created the Governors Awards after Jerry Lewis rambled while accepting his honorary Oscar. Then, during the “Oscars So White” chapter, the Academy threw its members under the bus and has ever since been adding new people — many who haven’t really accomplished anything and, in some cases, don’t even work in film. And now, because the Academy has an expensive museum to worry about, and because the whole organization has become so overstaffed and overpaid — there are literally more ushers and security people at Academy screenings than members — it’s scared to stand up for itself. When ABC told the Academy to take a bunch of categories off of the live show “or else,” the Academy bent over and spread ’em. They should have told ABC to go fuck itself and sold the show to someone else. It’s an insult to those categories’ nominees that their awards will be presented while the red carpet is still going on and people are going in and out of the room. And for what? To have more time to show clips from superhero movies and give out a Twitter award? On top of all this, members can’t even go to the show anymore — they’re not doing the lottery this year — and yet the Academy’s parking attendant gets seats every year. A lot of members are extremely unhappy and are exploring the possibility of a class-action lawsuit. This is not what we signed up for.

On my nomination nerd, I put Tick, Tick… Boom! at No. 1 — a lot of good that did for it! I also thought The Unforgivable was underappreciated — it’s the most powerful film about self-sacrifice that I’ve ever seen, with an amazing performance by Sandra Bullock. As for the 10 that did get nominated? Drive My Car is not a bad movie, but it belongs in the international feature category, not here, just like Parasite did. Dunes is worthy in a lot of categories, but not this one. I was looking forward to the new West Side Story, but apart from its opening sequence it is almost a carbon copy of the original; I know they’re emphasizing that they cast Latino and Latina actors this time, but the actress who plays Maria is named Rachel Zeglerso I think that’s a little overstated. Don’t Look Up is a one-joke movie. King Richard isn’t bad, but it isn’t particularly good. Licorice Pizza is masterful in some ways, but I don’t know how much it really has to say. The other four — Belfast, CODA, Nightmare Alley and The Power of the Dog — are all worthy. The Power of the Dog is beautifully acted, photographed and, in a lot of ways, directed, but it’s just too long, with some really dull moments. Belfast is moving, with great performances, and shows how the Troubles affected the average person, which I had never seen before; I’m not sure why they called the kid “Buddy” instead of “Kenneth,” but that’s another matter. Nightmare Alley is far superior to Guillermo del Toro’s other film that won this award [The Shape of Water]; it’s visually stunning and a study of greed that a lot of people could benefit from seeing. Goal CODA shows a slice of life that certain people live but most people are not exposed to, and it’s excellent in every way that a best picture should be — it’s got great storytelling, acting and direction, and it also conveys an important message about society. It deserves to be recognized.

I’m shocked that [CODA’s] Sian Heder was not nominated in this category and that [Drive My Car’s Ryusuke] Hamaguchi was. [West Side Story’s] Steven Spielberg shouldn’t have been nominated — that film was made primarily by the art department and the choreography department. [Licorice Pizza’s] Paul Thomas Anderson’s writing is more impressive than his directing. [Belfast’s] Kenneth Branagh and [Dog’s] Jane Campion are both very strong candidates; Kenneth just told his story in a more economical way.

[Being the Ricardos’ Javier] Bardem didn’t do much for me; he doesn’t look anything like Desi Arnaz, and the film wasn’t that good. I’ve never been a big fan of [King Richard’s] Will Smith. Denzel [Washington of The Tragedy of Macbeth] is always brilliant. [Dog’s Benedict] Cumberbatch gives a powerful, subtle performance. But my pick, way above all, is [Tick, Tick … Boom!’s] Andrew Garfield. You can see that he put his heart and soul into that film, doing things he’d never done before, and with an American accent, I might add. I loved that movie.

I have a feeling that she’s probably going to win, but I didn’t like Olivia Colman’s interpretation of that character [in The Lost Daughter] — she was just a one-note, bitter woman throughout, and I thought the actress who played the younger version of her character [Jessie Buckley] was much better. [Ricardos’] Nicole Kidman wasn’t anything special except when she re-created scenes from I Love Lucy. Both [The Eyes of Tammy Faye’s] Jessica Chastain and [Parallel Mothers’] Penélope Cruz are always good. Goal [Spencer’s] Kristen Stewart deserves this — if her interpretation of Diana wasn’t perfect, the whole movie would have sunk. Not only does she physically embody Diana, but she captures her whole essence. I haven’t liked a lot of her other films, but in this one her talent is undeniable.

I’m not sure how [Dog’s] Jesse Plemons gold [Ricardos’] JK Simmons got nominated. I liked [Dog’s] Kodi Smit-McPhee, but I’d like to see a larger body of work from him before we honor him with an Oscar. [Belfast’s] Ciaran Hinds is wonderful. But to me, it’s [CODA’s] Troy Kotsur, hands down — he was able to move a non-deaf audience to tears, he was so brilliant.

I’m not a big King Richard fan [the film for which Aunjanue Ellis is nominated]. I didn’t think [Dog’s] Kirsten Dunst was that special. [The Lost Daughter’s] Jessie Buckley was really good.[Belfast’s] Judi Dench is always amazing. But I’m voting for Ariana DeBose, the best thing about West Side Story.

I really disliked The Lost Daughter. I do not think Dunes belongs here because it’s not even a finished movie [part two of the adaptation is still to come] — but, in fairness, it’s already a far better interpretation of the book than the prior adaptation! Drive My Car is interesting. For me, it’s really close between The Power of the Dog and CODA. I just found CODA more powerful, and it’s no small feat for a hearing person [Heder] to capture the nuances of what life is like for deaf people.

The Worst Person in the World is very interesting, and I appreciated the humor and cynicism of Don’t Look Up. Goal Belfast deserves this one.

Encanto is charming, but Flee deserves recognition in this category, as much as any of the three it’s nominated for, because it uses animation in such a unique way to tell its story.

The Rescue should have been nominated and won. Flee is gimmicky. Writing With Fire is powerful. But I wasn’t blown away by any of these five.

[Austria’s Oscar entry] Great Freedom should have been nominated, and I might have even voted for it if it had been. Of the five that were, I liked all of them, but the best was clearly [Italy’s] The Hand of Godwhich is the closest thing to Fellini I’ve ever seen.

VOTE: The Hand of God

macbeth and Nightmare Alley were beautifully photographed. But the grittiness of the look of The Power of the Dog made you feel you were right there in that time and place.

VOTE: The Power of the Dog

I don’t think the costumes in Dunes were anything unusual. Cruella’s were very Disney. Nightmare Alley’s and West Side Story’s were certainly colorful. Goal Cyrano’s were the most creative.

The editing in Tick, Tick… Boom! was just extraordinary. He played off the rhythm and energy of the character and his music, in the sense that it’s frenetic and all over the place in a way that just worked.

Coming 2 America was a dreadful film. cruella is Disney—exaggerated characters. Dunes wasn’t particularly noteworthy for its hair and makeup. That leaves The Eyes of Tammy Faye and [House of] Gucci. I’ll give it to Tammy Faye because they totally transformed Jessica; it’s the least that I can do to acknowledge the suffering that she must have gone through!

VOTE: The Eyes of Tammy Faye

I liked the score of Dunesgoal The Power of the Dog’s score fits that movie to a T.

VOTE: The Power of the Dog

I’m a little biased because Diane Warren [the 13-time nominee who is up this year for “Somehow You Do” from Four Good Days] is a friend. I doubt she’s going to walk away with it, but given that I wasn’t particularly enamored with the other nominees, I’ll throw her a vote. “No Time to Die” [from No Time to Die] is not bad, but I think that “Skyfall” [from Skyfall] was a way better song.

I liked the production design of West Side Storygoal Nightmare Alley’s moved its story forward and enhanced the experience tremendously.

I look for sound design that’s realistic and advances the story. Dunes, No Time to Die and West Side Story are big and noisy; Belfast and The Power of the Dog are subtle. I was impressed by Belfast’s stuff in the streets and its use of music.

Here we’ve got all the popular movies, and their effects are pretty good. Spiderman [No Way Home]’s were above the others’.

A version of this story first appeared in the March 23 issue of The Hollywood Reporter magazine. Click here to subscribe.