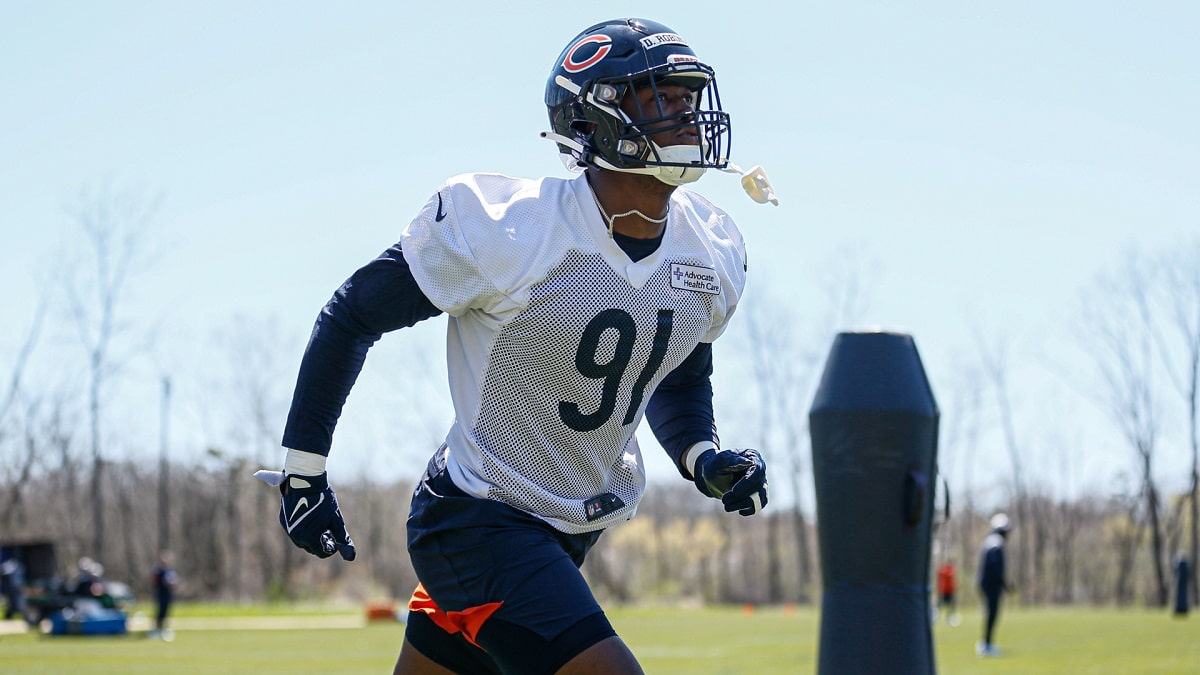 One would think that arriving in the NFL as a 5th round pick means Dominique Robinson is a humble person. For the most part, that is true enough. The new Chicago Bears defensive end isn’t a trash talker or somebody that likes to live a flashy lifestyle. He’s a down-to-earth young man who is already married. Yet, upon hearing the story of how he reached the pro level, one starts to learn the truth. This kid is as self-assured as it gets.

Sean Hammond of Shaw Local had the chance to speak with Robinson’s head coach at Miami of Ohio, Chuck Martin. He was the one who recruited Robinson out of high school. The new arrival was a quarterback at the time, but soon he underwent a position switch to wide receiver. It made initial sense. Robinson was a freak athlete with good size and speed. However, by the end of 2019, it became apparent the experiment wasn’t working.

Something had to change.

“That was all in the back of my head and then I’m watching the 2019 season,” Robinson said. “I’m going through the 2019 season at wide receiver, it wasn’t going my way. So I’m watching – I love watching college football – so I’m watching Chase Young just run around people, so I’m like, ‘Man, if I can’t do that, there’s something wrong with me.’”

Robinson went to Martin a few days after the RedHawks won the Mid-American Conference title game. Martin suggests he consider playing H-back, which is similar to a tight end position. Robinson had other ideas.

Martin told Robinson that the defensive line coach had wanted Robinson ever since he showed up on campus. So Martin was definitely on board.

That is incredible to think about.

Chase Young was viewed as the best pass-rushing prospect to come out of college in several years. He had 27 sacks over his final two seasons at Ohio State. Robinson took one look at him and said, “Yeah, I can do that.” That is not a line of thinking for ordinary people. It takes an unnatural amount of confidence to think he can make such a massive position switch halfway through his college career and master it fast enough to still get drafted.

Yet that’s exactly what he did. Robinson remade his body on the fly and worked tirelessly to learn his new craft. He didn’t waste time making an impact either. In three games during the COVID-shortened 2020 season, he had two sacks and 2.5 tackles for a loss. Then in 2021, he delivered 4.5 sacks and 8.5 tackles for a loss despite never being a starter. It is no wonder the Bears gravitated towards him.

Dominique Robinson is in good hands with this Bears staff.

Matt Eberflus has plenty of experience developing pass rushers in his long coaching career. Under his tutelage, Anthony Spencer went from solid rotational guy to Pro Bowler in Dallas. Denico Autry was a nobody for most of his run in Oakland. Then he breaks out for nine sacks in his first year with Eberflus. Bears defensive line coach Travis Smith played a central role in developing Raiders star defensive end Maxx Crosby.

It is far easier to understand why GM Ryan Poles felt confident taking a risk on Dominique Robinson. He knew the hands he was putting that ball of clay into. If he does as this staff instructs and plays with the same motor he did in college, the results should be everything the Bears could’ve hoped for. His potential isn’t as a specialist. He can be a full-time defensive end for this team.

All it comes down to is patience and a little luck.

Either way, it’s hard not to like this kid. He is that perfect balance of arrogance and humility that often makes for successful professional athletes. If the Bears did indeed score a future starter with him, they’re already off on the right foot.