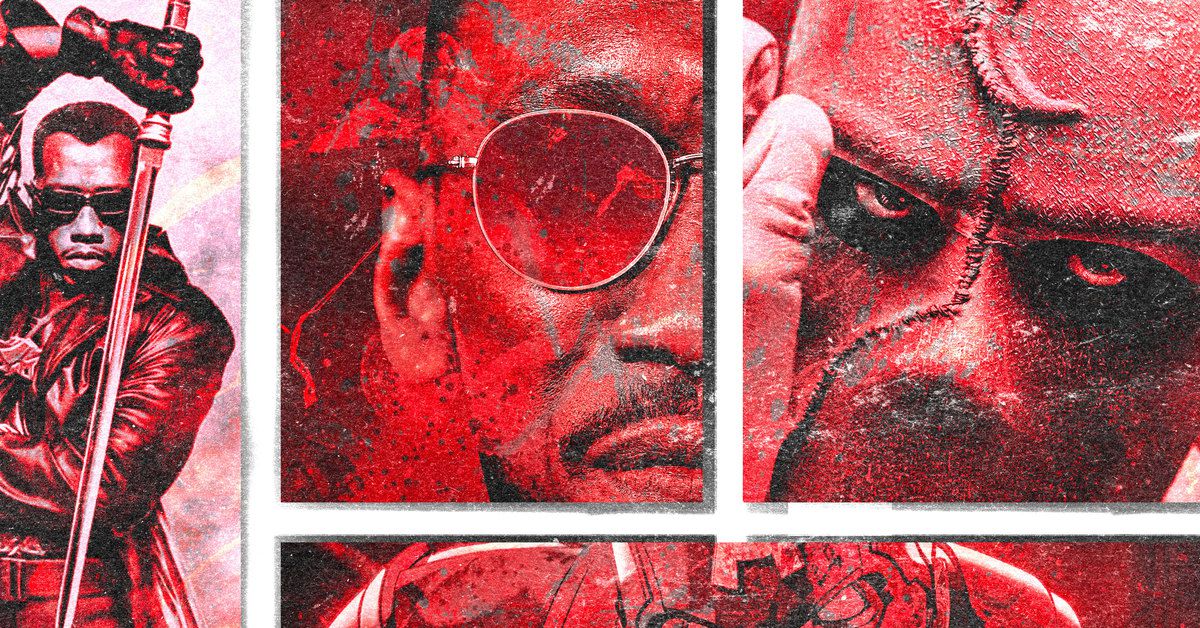 Long before there were Infinity Stones or the multiverse in the Marvel Cinematic Universe, and even before Tobey Maguire starred in Spidermanthere was Blade.

In 1998, Blade became the first entry in Marvel’s inaugural blockbuster franchise. The combination of blood raves and a vampire hunter played by a shades-and-trenchcoat-clad Wesley Snipes offered a new kind of superhero movie—essentially a macabre kung fu flick—in a decade when Batman dominated the box office. Blade II, which was directed by Guillermo del Toro and released in 2002 (20 years ago Tuesday), was even wilder and scarier than its predecessor. In the sequel, Snipes’s Daywalker faced a growing horde of mutated vampires called Reapers. This new breed was faster and stronger than the vampires Blade had previously faced, and they fed on humans and vampires alike. The Reapers prefigured the eerie, fantastic look of the creatures del Toro would focus on in Academy Award–winning films like Pan’s Labyrinth and The Shape of Watergreeting their prey with bifurcated jaws and barbed tongues:

Two decades after the release of Blade IIvampires are nowhere to be seen in the Marvel Cinematic Universe–but that’s about to change. Blade is being rebooted with Mahershala Ali standing in as its titular star. And the antihero who helped springboard Marvel’s on-screen success will headline a new wave of characters and projects that are bringing elements of fantasy and horror back to Marvel Entertainment’s output.

Marvel has a long history of horror and monster comics. According to Marvel.com, Atlas Comics—which would later become Marvel Comics—published almost 400 horror comics across 18 titles within just a five-year span in the 1950s. The ’70s saw another boom in horror comics under Marvel, which trained its spotlight on classic monster characters in popular titles like Werewolf by Night and Tomb of Dracula, both of which were created by Marv Wolfman. (Yes, that’s his real name.) While those titles may be forgotten by many, it was in the pages of those comics that two important Marvel characters would make their first appearances, as Werewolf by Night introduced Moon Knight and Tomb of Dracula spawned Blade.

Ali has already made his MCU debut as Blade, though it came in a seven-word voice-over cameo during a post-credits scene in Eternals, in which Blade and Kit Harington’s Black Knight hinted at a new direction for Marvel Studios that may be darker and scarier than ever. From Iron Man through Spider-Man: No Way Home, the company produced 27 films and five TV shows—with many more on the way—and yet the horror genre has largely been untouched territory. That’s started to change in recent years, as Marvel Studios has continued to tinker with new approaches to its expansive storytelling after the conclusion of the Infinity Saga.

Wanda Vision was a mystery-box series that grew creepier as it unveiled the truth behind Wanda Maximoff’s strange reality; the show used some of Wanda’s disturbing visions to help illustrate her repressed grievance and trauma. Later in 2021, the animated series What If…? featured a spooky episode (adapted from a Marvel comics series by The Walking Dead creator Robert Kirkman that ran from 2005 to 2006) that brought the MCU into a zombie apocalypse. Although “What If… Zombies?!” wasn’t actually all that scary in itself, it did present a potential future in which Marvel Studios tackles zombies on a grander scale, which will be depicted in the upcoming animated show Marvel Zombies. And Doctor Strange in the Multiverse of Madnessdue in theaters on May 6, has been hailed as potentially the first film to explore horror in the MCU.

Doctor Strange and Sinister director Scott Derrickson, who was initially slated to helm the Doctor Strange sequel, described Multiverse of Madness as Marvel Studios’s first scary movie. But Derrickson subsequently exited the project over a classic case of “creative differences,” and Kevin Feige later clarified that the film wouldn’t be a full-on horror movie, but rather a “big MCU film with scary sequences in it.” However, Sam Raimi (The Evil Dead, Spiderman), who has stepped in as Derrickson’s replacement, is experienced in both horror and in the blockbuster superhero genre, which he combined to great effect in a scene in Spider Man 2 where the tentacles of Doc Ock took on a life of their own.

Before we find out just how much horror will make it into Multiverse of Madnessthough, we’ll be introduced to Moon Knight, which is shaping up to be Marvel Studios’ darkest and scariest project yet. The series, which premieres next week, centers on Steven Grant, a museum gift-shop employee who discovers he’s been living with dissociative identity disorder. He struggles to distinguish reality from his dreams and nightmares, and he learns that Steven Grant is just one of the multiple personas inhabiting his mind and body. Moon Knight‘s first extended clip showcases a jump-scaring scene pulled straight from a horror movie, in which Grant looks down an ominous, flickering hallway and catches terrifying glimpses of Khonshu, the Egyptian god of the moon, before a sweet old lady takes the Khonshu’s square:

Moon Knight will be another test case in determining just how scary and dark Marvel Studios is willing to get while living under the roof of the House of Mouse. As a series that appears influenced at least in part by horror and deals with a protagonist who has a mental illness, Moon Knight looks to be aimed at a more mature audience than the more family-oriented Disney+ shows that surround it on Marvel’s release schedule: last year’s Christmas-themed Hawkeyeand the YA-centric Ms.Marvel, which premieres in June. Just last week, Disney+ also added The Defenders Saga to its catalog, integrating street-level Netflix heroes such as Daredevil and Jessica Jones into the rest of the Marvel universe. Given all of those shows’ adult content, from sex scenes to brutal violence, the move prompted an update to the streamer’s parental controls, which didn’t forestall the concern and anger that the Parents Television Council expressed in a letter entitled, “PTC to Disney: Better Online Parental Controls are Good, but TV-MA-Rated Content Destroys Your Brand.” (A highlight from the PTC statement: “What comes next, adding live striptease performances in Fantasyland at Disney World?”)

The announcement about the Blade reboot spurred not only excitement, but also speculation about its content rating. Blade will be directed by Bassam Tariq (Mogul Mowgli) and written by Stacy Osei-Kuffour (HBO’s watch men), but details about the film have been sparse. The R-rated Blade trilogy is scarier and more violent than anything Marvel Studios has produced to date, and any given scene is laced with more profanities than all of the Infinity Saga movies combined. (In 2022, you unfortunately won’t find many superheroes delivering lines like, “Some motherfuckers are always trying to ice skate uphill.”) While nothing has been announced, all signs are pointing to Blade falling in line with Marvel Studios’s traditional PG-13 rating, though Feige didn’t seem to consider that a limitation when he was asked about whether the company would be venturing into more adult programming.

“I think we target everything we’re doing now for kids and adults,” Feige said at a Television Critics Association panel in 2021. “So I think your question is: more adult or R-rated? Other than Dead Poolwhich has already established itself as a certain genre and a certain rating that we’ve already said we would not mess with when we start working with Dead Pool–which we have—other than that, we’ve not ever encountered a story, or a story line, or a character’s journey, that a PG-13 or the tone or the ratings that we’ve been using up to this point has prevented. We’ve never been held back by it. … We’ve been able to tell all the kinds of stories we’ve wanted to with the tonality and the rating structure that we have now.”

Even with Deadpool 3 retaining its R rating after 20th Century Fox’s Marvel properties were returned to Marvel Studios in Disney’s acquisition of the historic film studio in 2019, it feels safe to say that the Blade reboot won’t feature Ali ripping out throats with his bare hands and throwing them back at his enemies. But that doesn’t necessarily mean that the new Blade won’t have the potential to be scary, which also goes for any of the upcoming MCU projects that are dipping further into horror territory. After all, there have been plenty of successful PG-13 horror movies, and the reboot can still learn from the direction and visuals of a film like Blade IIeven if it tones down the violence and some of Blade’s most memorable word choices.

Thanks to the visions of del Toro and writer David S. Goyer and the charisma of Snipes and costars Ron Perlman, Norman Reedus, and Donnie Yen (even if he doesn’t have a single line and dies off-screen), Blade II was as effective as a superhero movie as it was as a straight-up monster feature. Twenty years later, the Blade reboot is mere months away from entering filming. While that means that the movie still has a way to go before hitting theaters, presumably next year, Moon Knight and Doctor Strange in the Multiverse of Madness—along with an upcoming Halloween special based on Werewolf by Nightdirected by composer Michael Giacchino and starring Gael García Bernal—will serve up MCU horror appetizers before Blade‘s hand stroke. The new Blade may not be capable of recapturing all the delightful absurdities of Blade IIbut with a star like Ali leading the way, it has the opportunity to thrill audiences with the same scares that attracted them to Marvel movies in the first place.