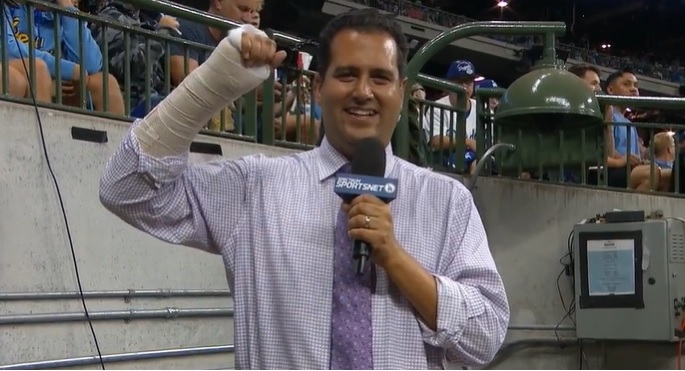 Well, Vassegh indeed took the slide ride, and it did not go well.

Vassegh — who yelled “Holy crap!” repeatedly as he went down the slide — crashed hard at the end.

Struggling to speak — and give play-by-play of the game — through laughter, Davis said, “First, I want to report that he’s okay.”

The cameras then went to Vassegh, who had a cast on his right arm, which led to even more laughter from Davis and Garciaparra.

Vassegh explained that he suffered fractures in his right hand/wrist, and also suffered six fractured ribs (he explained the injuries in the moments after the following clip).

This is incredible television:

Vassegh said he has two fractures in his right hand/wrist and six fractured ribs.

He thanked Justin Turner, Cody Bellinger, David Price and #Dodgers trainers for looking out for him. https://t.co/xsFDR80ETh

In defense of Davis and Garciaparra, it’s very hard to watch the slide video and not laugh!

Vassegh had a great sense of humor about the painful incident, and kudos to him for still handling reporting duties.

A new angle thanks to Justin Turner’s Instagram. https://t.co/2xqUiC3qL7 pic.twitter.com/NJC8Woidrg