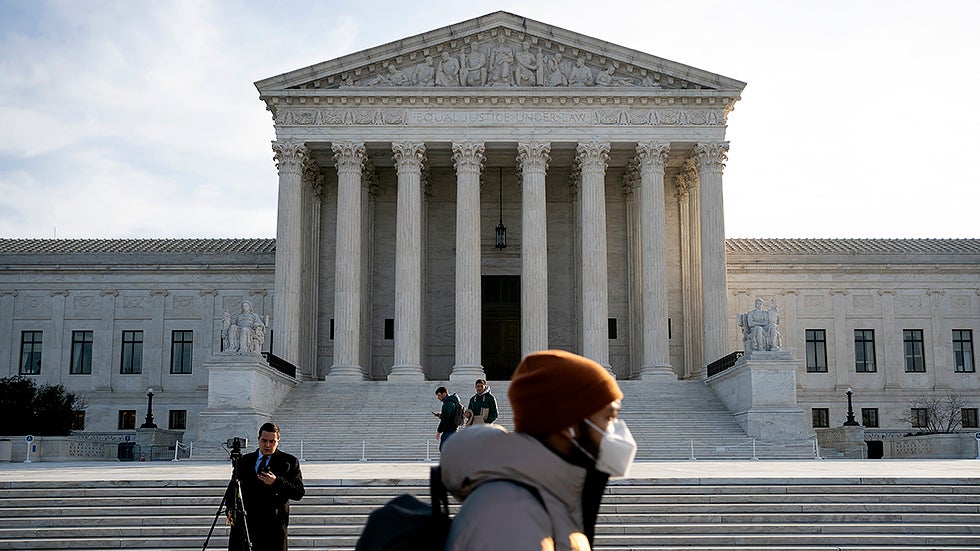 Democrats on the campaign trail are sounding the alarm about being able to hold control of the Senate — and with it their ability to confirm Supreme Court justices — in the wake of a leaked draft opinion suggesting the high court is poised to overturn Roe v. Wade.

Democrats are facing an existential threat to their paper-thin Senate majority in this year’s midterm. They warn that if another Supreme Court vacancy comes up, a Republican Senate majority would almost certainly doom the prospects of any nominee that President Biden puts forward.

“At this critical moment, we must protect and expand Democrats’ Senate majority with the power to confirm or reject Supreme Court justices,” Christie Roberts, the executive director of the Democratic Senatorial Campaign Committee (DSCC), said, also noting that the draft opinion authored by conservative Justice Samuel Alito “dramatically escalated the stakes of the 2022 election.”

The hope for Democrats is that the threat of the Supreme Court overturning Roe v. Wade, the seminal case establishing the constitutional right to have an abortion, will serve as a powerful call to action for their voters in a year when Republicans are bullish about their prospects of recapturing control of Congress. The GOP needs to pick up just five seats in the House and only one in the Senate to regain their majorities, and Democrats are already struggling with vulnerabilities on issues like the economy and immigration.

Democrats are acutely aware of what a Republican Senate majority could mean for any future vacancy on the Supreme Court.

After former Justice Antonin Scalia died in 2016, then-Senate Majority Leader Mitch McConnell (R-Ky.) refused to hold a confirmation hearing for former President Barack Obama’s Supreme Court nominee Merrick Garland, insisting that it was inappropriate for the Senate to confirm a new justice to the court ahead of that year’s presidential election.

That move set off a fury among Democrats, whose anger only deepened after former President Donald Trump installed Justice Neil Gorsuch on the high court.

“I think Democrats still have a lot of anxiety left over from 2016 and the whole Merrick Garland thing,” one Republican strategist who has worked on Senate campaigns said. “So as far as their base goes, the idea that Democrats need to be able to confirm a nominee – I can see it carrying some weight.”

But, the strategist added, that push isn’t limited to one side.

“They’re going to say ‘let us keep the majority so we can confirm another nominee if we get one,’” the strategist said. “But don’t think that Republicans aren’t going to be saying a different version of the same thing. They don’t want to see any more liberals on the court and they have a big tendency to vote based on that.”

Republicans have traditionally been successful at using the issue of the court to galvanize their conservative base, with many viewing the appointments of Justices Brett Kavanaugh, Neil Gorsuch, and Amy Coney Barrett as Trump following through on his campaign promises.

Jon Reinish, a Democratic strategist and former aide to Sen. Kristen Gillibrand (DN.Y.), described the Supreme Court’s leaked draft opinion as a “political earthquake,” one that has the potential to dramatically change how Democratic candidates campaign this year.

“This has been a tremendous wakeup call to Democrats to actually campaign on judicial issues,” Reinish said. “Democrats have always failed abysmally to campaign on the court and mobilize the way conservatives do. I think that’s going to change now.”

Democrats point to the impact the high court has a number of contentious issues like abortion, as a means for invoking it on the campaign trail.

“The average voter is starting to understand the importance of the issues that are making their way to the courts and how they impact their overall quality of life,” said Democratic strategist Antjuan Seawright.

For Democrats, this year’s Senate midterms are a relative bright spot in an otherwise bleak election year. Many in the party see the loss of their ultra-narrow House majority as foregone conclusion, given the historical headwinds they’re facing and GOP gains in the decennial redistricting process.

Maintaining their Senate majority is still a possibility, they say, but it won’t be easy. While Democrats are eyeing a handful of pick-up opportunities in states like Pennsylvania, Wisconsin and North Carolina, they’re also defending vulnerable incumbents, like Sens. Mark Kelly (D-Ariz.), Raphael Warnock (D-Ga.), Catherine Cortez Masto (D-Nev.) and Maggie Hassan (DN.H.), giving them little room for error.

Still, the magnitude of the draft Supreme Court opinion could give Democratic voters a jolt of energy.

“I think this rewrites every assumption we’ve had about the midterms,” Reinish said. “I think this gets a lot of people off the sidelines and if I’m Maggie Hassan, Catherine Cortez Masto, Raphael Warnock, Mark Kelly, I’m talking nonstop about what this election means for the Supreme Court.”

It’s not hard to see how Democrats might be able to seize on the draft opinion as a key campaign issue. A Politico/Morning Consult poll conducted this week in the immediate aftermath of the draft’s leak found that voters oppose overturning Roe v. Wade by a nearly 2-to-1 margin, with 50 percent saying it should not be overturned and only 28 percent saying it should be.

Democrats are working to use the issue to galvanize their own base, warning that Republican majorities in Congress and in the states could lead to an even more conservative-leaning Supreme Court.

“Because progressives did not have a majority in the Senate during Obama’s last term, we got Kavanaugh,” said Kendra Cotton, chief operations officer of the New Georgia Project, a nonpartisan group committed to defending voting rights. “So it’s trying to connect the dots so that they understand that ‘if X then Y.’”

Cotton said the goal should not be to make the Supreme Court swing left or right, but “to make sure that it represents the people” and to have an ideological balance.

“If that means expanding the court, then we’re for it, we just haven’t had those explicit conversations to where we can say this is something New Georgia Project is advocating on,” she added.

Some Democrats have prioritized the need to abolish the Senate filibuster in their campaign messaging, arguing that it would be easier for Congress to codify Roe v. Wade without the parliamentary procedure. Others are specifically using the issue of Roe v. Wade to galvanize their liberal base.