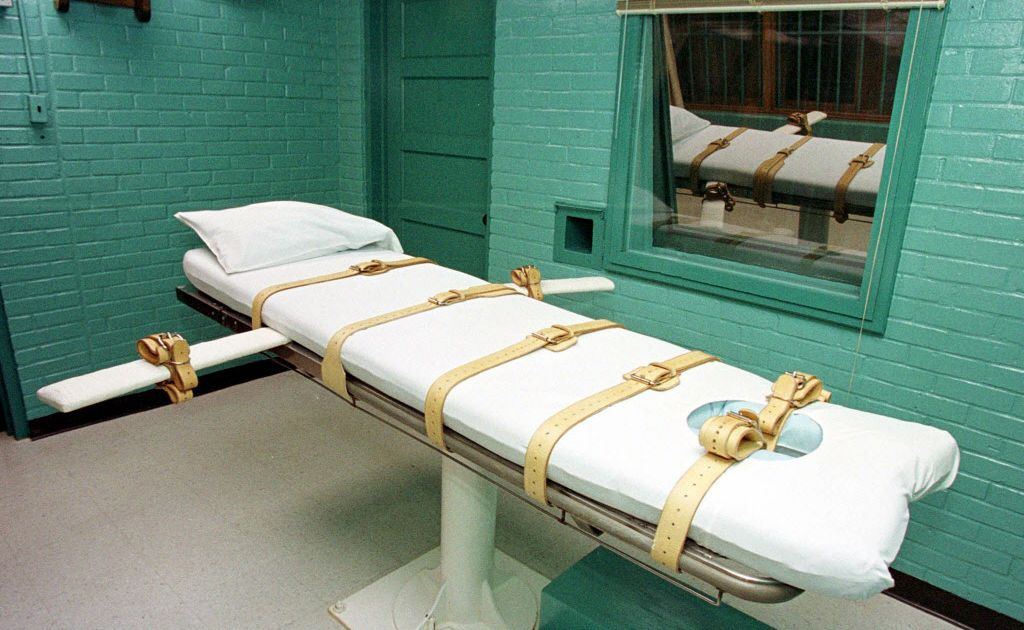 HUNTSVILLE — He lived to be 41, a year longer than the woman he murdered. But the court appeals that helped Kosoul Chanthakoummane approach middle age couldn’t forestall his fate any longer.

A Collin County jury condemned Chanthakoummane to death for beating and fatally stabbing Sarah Anne Walker, a real estate agent, during a robbery at a model home in McKinney in 2006.

As his mother, Phongsamout Thongpho, and other witnesses watched Wednesday from a viewing booth, a lethal dose of the sedative pentobarbital flowed into his bloodstream shortly after 6 pm, rendering him unconscious before slowing and ultimately stopping his heart.

Chanthakoummane, clean shaven and wearing glasses, asked for a spiritual adviser, a Buddhist monk, to be with him in the death chamber. The monk placed his hand over the condemned man’s chest—a first in Texas executions—while reciting a prayer.

No one from the victim’s family was present; nor were any of the Collin County law enforcement officials involved in the investigation and prosecution.

The murder of the 40-year-old mother of two in the suburb north of Dallas shocked residents with its brutality and randomness and attracted national media attention. It was clear from her defensive wounds, police said, that Walker fought Chanthakoummane as he repeatedly stabbed her and bit her on the neck during a fierce struggle.

A couple visiting a model townhome in the Craig Ranch community found her body on July 8, 2006. Ten of the 33 stab wounds on her body were fatal.

Chanthakoummane, strapped onto a gurney, turned his head and nodded toward his mother and then spoke his final words, thanking “my Lord and Savior, Jesus Christ” and all the people in his life who “aided me in this journey.”

“To Ms. Walker’s family, I pray my death will bring them peace,” he said, voice slightly quivering, before his eyes closed.

A doctor pronounced the time of death: 6:33 pm., about 25 minutes after the lethal solution began flowing into his arms.

Officers arrived at the model home to find the desk and chair out of place, a plant stand knocked over and a pair of women’s shoes on the floor along with a broken hair clip and earring. Crime scene photos showed blood pooled and streaked across the dining room floor, indicating she was dragged into the kitchen. The killer was injured during the struggle. Blood and DNA found on Walker and in the house would lead to his conviction.

When Chanthakoummane was arrested nearly two months later, police noticed healing cuts and scratches on his hands. He initially denied being in McKinney but then said his car had broken down in front of the model home. But he maintained his innocence, claiming he walked inside to get a drink of water and left without encountering anyone.

The weapon used to kill Walker was never recovered. Neither were her brand new Rolex watch and silver ring.

Chanthakoummane “intentionally and repeatedly attempted to isolate a woman to commit the offense,” court records said.

The first real estate agent he called brought her husband, which scared him off. Then he saw Walker arrive for work across the street, and he walked inside, detectives and prosecutors said.

It wasn’t his first time committing violence against women.

At the time of the murder, Chanthakoummane was out on parole for a kidnapping and robbery in North Carolina years earlier during which he and another teen broke into a house and tied up two elderly women. They held the women at gunpoint before stealing a car and running from police.

Prosecutor Greg Davis, in an interview for the TV show Forensic Filescalled him “a psychopath and a sociopath” interested only in helping himself.

A federal judge ruled in 2015 that Chanthakoummane’s criminal history was “extensive and fraught with violence,” and that he committed violent assaults and thefts as a juvenile.

Anti-death penalty activists opposed Chanthakoummane’s execution, saying his 2007 conviction was based in part on flawed evidence like bite mark analysis and police hypnosis.

Chanthakoummane sat on Texas’ death row for 15 years while his various appeals cycled through the legal system. Judges rejected his latest appeals, which questioned DNA evidence used to convict him. State lawyers argued that DNA analysis was the case’s strongest evidence and that additional testing of samples continued to point to his guilt.

Chanthakoummane was born in the US to war refugees who had fled Laos to give their family a better life.

His parents were poor farmers in Laos. His father also served in the Laotian Army, helping the US during the Vietnam War in the late 1960s before being “sent to a re-education camp after the Communists took power in 1974,” according to court records.

The family arrived in the US after Chanthakoummane’s sister was born in 1979. After moving several times to find better work opportunities, they settled in Charlotte, NC when he was 5 years old.

While his three older siblings led “relatively productive lives,” Chanthakoummane had “numerous discipline problems” even before entering the juvenile justice system, court records said. That included “stealing from his siblings, going out late at night without permission, and kicking holes in the walls of the home,” records show.

His family was also aware of his involvement with gangs as a teen, his attorneys said.

Defense attorneys said they didn’t ask family members to testify at trial because they, including his mother, believed he “deserved the death penalty” if he was guilty, court records said.

Keith Gore, one of his lawyers, said interviews with the family indicated they considered him “ill-tempered, unruly and disrespectful of authority,” according to court records. He stole cars and violently assaulted a classmate, landing him behind bars at age 15.

But his conduct soon escalated, resulting in serious felony charges when he and another teen broke into the North Carolina house and held the occupants hostage. Chanthakoummane was sentenced to 11 years in prison for kidnapping and robbery and was paroled to Texas after seven years.

He was 25 years old when he arrived in North Dallas to live with his sister and her fiancé, seeking a fresh start.

Friends and family members described him as a quiet man who didn’t wish to return to a life of prison bars and handcuffs. After initially struggling to find work, Chanthakoummane landed a job as a delivery driver for an office supply company.

But he was overdrawn on his checking account and viewed robbery as a way out of his predicament, prosecutors said. His own lawyer agreed during opening statements at his trial.

“He wanted to rob her,” the defense attorney told jurors about Walker. “It didn’t go the right way, and he killed her.”

Walker sold homes for 20 years and loved her job. She was described by those who knew her as fun, outgoing, successful and hardworking. She drove an expensive car and loved to travel.

She was recently divorced and had two sons.

Her father, Joe Walker, a devout Catholic, said in interviews before he died that he forgave his daughter’s killer. He did not want Chanthakoummane to be executed, preferring that he spend the rest of his life in prison.

But his other daughter, Jackie Mull, felt the opposite.

“The evidence was overwhelming and showed the brutality of a cold-blooded killer. If the death penalty is reserved for the worst of the worst, I believe Kosul [sic] Chanthakoummane has earned himself a front-row seat,” Mull said in a 2007 statement after the trial.

Joe Walker talked about his daughter and her murder in a video produced by the Knights of Columbus. Death Penalty Action, a group opposed to executions, shared it during a recent news conference about the case.

Joe Walker said in the video that hundreds of people showed up for his daughter’s funeral Mass in Dallas. He said he told those in attendance that they need to pray for “whoever did this.”

“On the other hand, I wake up in the middle of the night sometimes just feeling the 27 stabs,” he said in the video. “Sure I’m angry. It would be foolish to say I wasn’t angry about what happened.”

He said he believed Chanthakoummane would “repent” as his execution drew nearer.

But there would be no expressions of remorse. Chanthakoummane adamantly maintained he was innocent. Death Penalty Action released a recorded message from him weeks before the execution in which he called his conviction a “miscarriage of justice.”