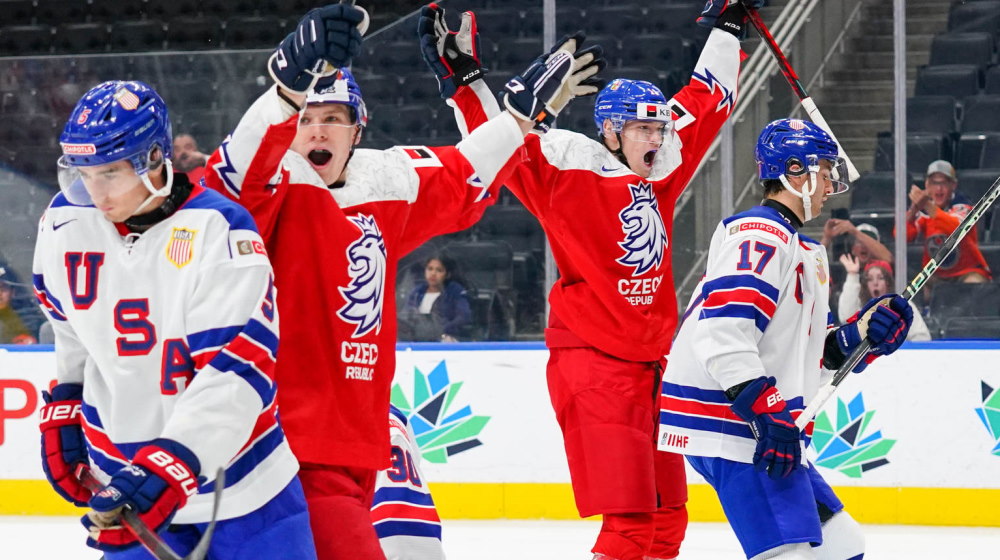 The Americans got just the start they wanted, jumping into a 1-0 at 12:03 with a bit of good fortune. A simple clear-in bounced improperly off the side boards and the puck came out by the faceoff dot instead of rolling behind the net, where goalie Tomas Suchanek was.

Matt Coronato got to the puck first and fired quickly, but Suchanek dove back to get his stick on the puck. It came right to Logan Cooley, however, and he fired it into the open net for his second goal of the tournament.

The Czechs had been unlucky not to score first, though, as Tomas Urban rang a hard shot off the post that stayed out.

The US continued to take the puck to their opponents, but the Czechs didn’t panic and played disciplined hockey inside their own line. They didn’t test Mbereko much, but they did tie the game at 17:55. The play started in the corner when Kulich won a puck battle back to the point. Jiri Tichacek’s long shot was expertly tipped in front by captain Jan Mysak, making it a 1-1 game.

It was the Czechs who came out and dominated the second period, one in which the Americans looked decidedly lost and uncharacteristically flat. Suchanek was solid but wasn’t tested often, and the Czechs had many more chances than the two goals they scored.

They took a lead for the first time at 7:34 on a simple play. Petr Hauser made a little side pass to Ivan Ivan, and he was allowed to walk into the faceoff circle where he snapped a wicked shot off the far post and in. They padded their lead three minutes later on a bad gaffe by Mbereko. Matyas Sapovaliv’s routine shot slipped through the goalie’s equipment and dribbled over the line, giving Czechia added confidence and further rendering the US mood flat.

Things went from bad to worse in the third. Less than three minutes in, Brett Berard was assessed five and a game for a slew foot. But the Americans killed that off expertly and then got a five-minute power play of their own when Svozil nailed Colley with a knee-on-knee hit at the Czechia blue line.

Sure enough, the US cashed in on a scramble in front, Carter Mazur lifting the puck over a sprawled Suchanek at 11:31 to make it a one-goal game. But Czechia managed to contain the damage to that one goal, thanks to Suchanek, who robbed Mazur moments later from in close.

Mbereko went to the bench with 1:40 left and a faceoff in the Czechia end, but a giveaway allowed Kulich to steal the puck and score an empty netter to seal the victory.