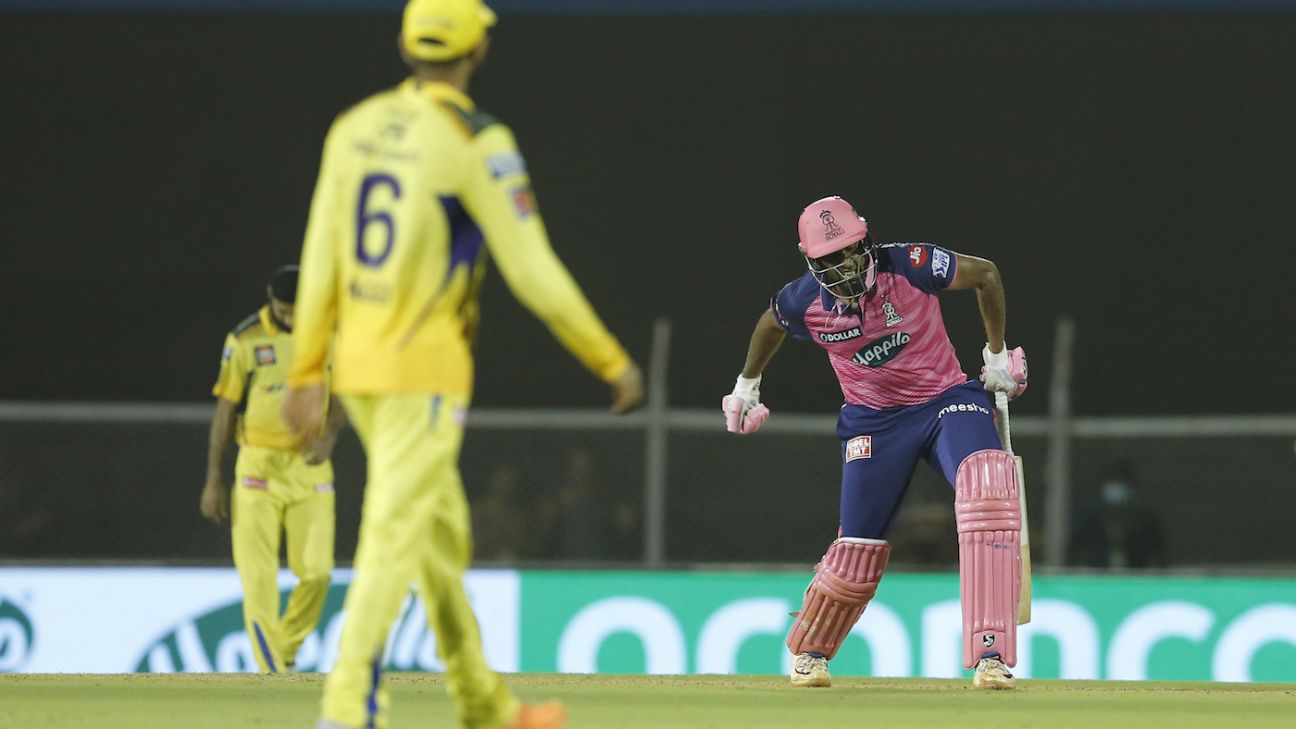 Even before the season began, R Ashwin was told by the Rajasthan Royals management to be prepared to bat at No. 3, should they lose an early wicket. Having opened the batting in the practice matches, Ashwin previously did the job of a pinch-anchor or a pinch-hitter depending on the situation. On Friday against Chennai Super Kings, Ashwin had to deal with the unfamiliar role of finishing a chase. And finish he did, with a whole lot of smarts, establishing himself as the do-it-all man this IPL.
Bowl with the new ball? Safe. Bowl in the middle or death? Why not. Bowl to right-hand batters? Yes sir. Bat at No. 3? Bring it on. After all, Andre Russell aside, Ashwin is the only player to do the double of taking ten wickets and scoring 150 runs this IPL.

Closing out a high-pressure chase, with a top-two spot at stake, however, isn’t up Ashwin’s alley. He is no power-hitter like Russell or his Royals team-mate Shimron Hetmyer. His batting style is more suited to chipping the ball over the infield and taking advantage of the powerplay restrictions.

Ashwin walked out to beat in the 12th over in Royals’ pursuit of 151 to give Hetmyer and Riyan Parag ideal entry points. However, with Hetmyer holing out while trying to clear the bigger boundary for 6 off seven balls and Parag only going at a run a ball in the end overs, Ashwin cranked up the tempo, with an unbeaten 40 off 23 balls, to usher Royals home .

He dashed out of the crease on the third delivery he faced from Moeen Ali and pumped it over the shorter leg-side boundary for six. Super Kings, however, struck back through legspinner Prashant Solanki who dared Hetmyer to clear the bigger side and had him skying a catch to deep midwicket. At this point, Royals needed 39 off 22 balls, with four potential No. 11s – Trent Boult, Yuzvendra Chahal, Prasidh Krishna and Obed McCoy – in the dugout.

Ashwin knew that Solanki would now hide the ball away from his reach and deny him access to the shorter leg-side boundary. Ashwin, however, shuffled across off, brought it within his reach and slog-swept a flat six against the turn. When Mukesh Choudhary erred too full, Ashwin got underneath the length and once again cleared the midwicket boundary for his third six – the joint-most he has hit in a T20 game.

Game over for Super Kings.

Ashwin attributed his success with the bat to the hard yards he had put in at training in the recent past. Speaking to his former Tamil Nadu team-mate and good friend Abhinav Mukund on Star Sports TamilAshwin revealed that he had been working on perfecting the slog sweep since the Chennai Test against England in February 2021, when he countered Moeen and Jack Leach.

“I’ve been playing the slog sweep for some time,” Ashwin said. “I’ve been trusting the sweeps more regularly since the Chennai Test match. I feel that’s an important shot. I’m someone who times the ball well, so if I play the slog sweep I feel I can make the bowler bowl to my lengths. I’ve worked hard [on my batting]. I read the game well and I know the ebbs and flows of the game; I always back myself on that front. Unfortunately, I’m not so blessed with a lot of power. So, consciously I’ve worked on my batting and my technique.”

R Ashwin, at No. 3, changed his stance a number of times against Delhi Capitals•BCCI

Among the techniques Ashwin has used this season is a crouched batting stance, which has often allowed him to get more elevation to clear the infield in the early exchanges. It was on show during his first T20 half-century, against Delhi Capitals, at the DY Patil Stadium earlier this month.

“The stance is a well-calculated move,” Ashwin said. “DY Patil is a venue where there is steep bounce and so I used that stance to make use of the bounce there. Hand extension, using the top hand are among the other areas I’ve worked on. You work on a number of things , but only if you find success you can follow that and take it forward. [it worked out].”

It was Ashwin who had earlier set the game up for Royals with the ball. After he conceded two fours and a six to a rampaging Moeen in his 16-run first over, Ashwin bounced back to trap Devon Conway lbw with a slider that was too full for the sweep. Despite that costly opening over, Ashwin ended with excellent figures of 4-0-28-1.

“In T20 cricket, the accuracy of a bowler is very under-rated,” Ashwin said. “Whatever we think we should be able to execute it. If we combine accuracy and execution, we can always back ourselves against any batsman. Half of the bowlers struggle when they can’t execute a plan at the end of the day. Another major aspect I’ve worked on is the intensity of the ball.

“Sometimes when you concede early runs, your bowling may be flat and you may tentatively deliver the ball. These things can happen in T20 cricket, but you need to raise the intensity every ball in T20 cricket and maintain the accuracy. My bowling volume repetition is important for me, and some batters can’t pick my subtle variations. That gives me the best chance. I won’t think about the batter – whether it is MS Dhoni or Moeen Ali. Whatever I practiced yesterday, I can come and bowl today. I have that gift and I want to use it continuously in T20 cricket.”

Ashwin is a gift that keeps on giving, with the bat too. Beware of allrounder Ashwin, Gujarat Titans.

Deivarayan Muthu is a sub-editor at ESPNcricinfo