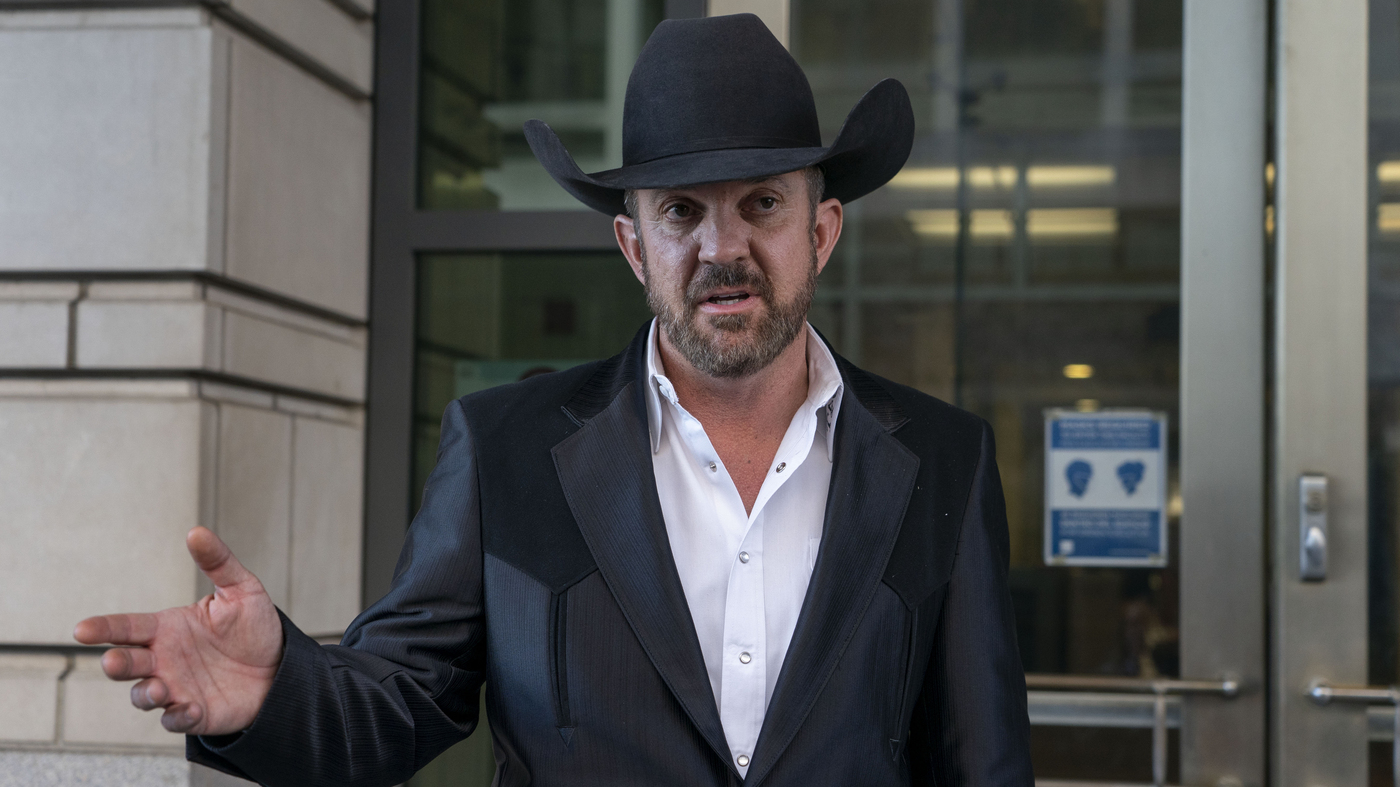 Couy Griffin, a commissioner in Otero County, NM, speaks to journalists as he leaves the federal court in Washington, DC, on March 21, 2022.

Couy Griffin, a commissioner in Otero County, NM, speaks to journalists as he leaves the federal court in Washington, DC, on March 21, 2022.

A federal judge found a New Mexico elected official and founder of “Cowboys for Trump” guilty on one count and not guilty on another in the second trial relating to the Jan. 6, 2021, US Capitol uprising.

Prosecutors alleged Griffin climbed over an outer wall and then went up a temporary staircase to an outside deck at the Capitol. Judge Trevor McFadden, presiding over what was the first bench trial related to the Jan. 6 attack on the Capitol, said evidence showed Griffin crossing three walls and that Griffin would have seen fencing in the area.

“All of this would suggest to a normal person that perhaps you should not be entering the area,” said McFadden, who was appointed to the US District Court for the District of Columbia in 2017 by then-President Donald Trump.

Unlike many charged in the insurrection, Griffin, who waived his right to a trial by jury, was not accused of entering the Capitol building itself or of assaulting any law enforcement officers.

In addressing the disorderly conduct charge, McFadden pointed to a montage of other video footage from Jan. 6, including conduct he seemed to see as more disruptive than Griffin’s.

“The defendant is never seen engaging in the kind of property destruction or physical violence seen in the government’s montage,” McFadden said.

The mixed verdict represents a partial victory for the government, which succeeded in establishing that the Capitol grounds were an area protected by the Secret Service on the day of the riot.

Other defendants have tried to challenge the Justice Department on the Secret Service protection question, and McFadden’s ruling suggests their arguments may not succeed in court. At the same time, Griffin’s acquittal on the second charge may give those defenders hope of at least a partial victory at trial.

On the day of the Capitol riot, Griffin was accompanied by Matthew Struck, a videographer who sometimes did social media work for “Cowboys for Trump.”

Struck, who was granted immunity to testify in this case, provided the FBI with dozens of videos which documented Griffin’s path from the “Stop the Steal” rally near the White House to the Capitol, as well as Griffin’s actions at the Capitol riot.

Since Griffin’s actions and statements on Jan. 6 were well-documented, the government’s case against him hinged mostly on legal definitions: what were the bounds of the restricted area, what authority set it, and did Griffin’s conduct reach the bar of “disorderly.”

The prosecution, led by Senior Assistant US Attorney Janani Iyengar, argued that Struck’s videos showed Griffin knew what he was doing was wrong.

“We don’t have to rely on inferences, we have the defendant’s own statements that he knew this area was restricted, and he entered anyway,” Iyengar said in a closing statement, referring to comments Griffin made after the riot about the area around the Capitol being roped off on Jan. 6.

The government also argued that any reasonable person would have understood the Capitol grounds and inauguration stage were off limits to the public.

Iyengar also pointed to testimony from a Secret Service witness saying the continued presence of unauthorized individuals within the restricted area forced then-Vice President Mike Pence to remain evacuated throughout the riot.

The trial marked the first time the government has acknowledged Pence, and his family’s, location during the Capitol riot: an underground loading dock near the Capitol Visitor Center. The government has repeatedly sought to shield this information from the public, due to security concerns. Judge McFadden, however, said that Griffin had the right to probe this evidence in open court. Pence’s location was key to proving Griffin violated the law regarding restricted areas.

The Justice Department has charged many defendants under the same statute as Griffin, which depends on an area being restricted due to the presence of a Secret Service protectee.

If Judge McFadden had ruled that the restricted area no longer included the Capitol because Pence went underground, that ruling could have caused ripple effects in the hundreds of other Jan. 6 boxes.

Defense attorney Nicholas Smith argued the area around the Capitol was restricted by the US Capitol Police, not by the Secret Service, and therefore not governed by the particular statute Griffin was charged under.

Smith also argued that Griffin did not know he’d entered a restricted area at all, pointing to a lack of “Do Not Enter” signs in the specific area of ​​the boundary Griffin crossed.

The prosecution argued that the restricted area of ​​the Capitol grounds was well-marked, including with bike racks and signs from the US Capitol police.

Inspector John Erickson of the Capitol Police also tested that law enforcement used flashbang and chemical irritants to clear the lower west terrace of the Capitol during the riot, suggesting the area was clearly off limits.

On the charge of disorderly conduct, the prosecution pointed to Griffin’s loud speeches, including one in which he said, “we’re not going anywhere, we aren’t taking no for an answer. We’re not gonna get our election stolen from us from China. This is an America that’s had enough right here.”

The defense tried to turn the disorderly conduct charge into a first amendment free speech question. Smith pointed to the steps and lawn of the Capitol as a public forum, where Griffin had a “constitutional right” to make speeches as seen in the videos.

As long as Griffin did not incite violence, Smith argued, Griffin’s speech was protected. Smith pointed to witness testimony from Struck saying when Griffin led a prayer the crowd was calm, some even kneeling.

McFadden repeatedly drew a distinction between the lawn of the Capitol and the inaugural stage itself on the question of the Capitol grounds as a public forum. He also noted that while some members of the crowd knelt in response to the prayer, others chanted “Pray for Trump.”

Griffin did not testify in the trial, but sat at the defense table. He arrived the first day in a black cowboy hat and black western-style jacket.

Griffin has drawn media attention before. Shortly after Jan. 6, he said in a Facebook video that “we could have a Second Amendment rally on those same steps that we had that rally yesterday. You know, and if we do, then it’s gonna be a sad day, because there’s gonna be blood running out of that building.”

After the trial, Griffin told reporters, “I wear January 6 as a badge of honor.”

Griffin is scheduled to be sentenced in June of this year.

He is only the second person to go to trial in connection with the Jan. 6 attack. The first trial resulted in a unanimous guilty verdict on all five felony charges, after the jury deliberated for just two hours. According to an NPR database tracking the charges related to Jan. 6, nearly 800 people have been charged with crimes stemming from the Capitol riot, and more than 230 have pleaded guilty to one or more charges.