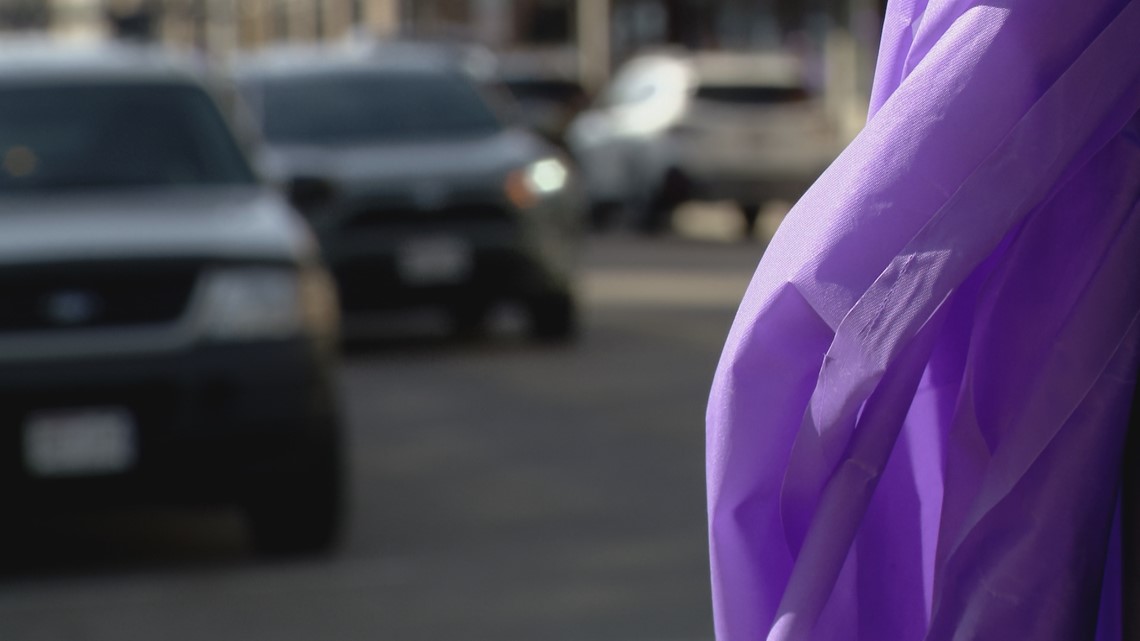 Purple ribbons and signs hang all across Chippewa Falls, a community now rustling with the fact that a 14-year-old has been arrested for killing Peters.

CHIPPEWA FALLS, Wis. — Carl Smiskey struggled to find words when he learned that a 14-year-old suspect had been arrested in the killing of 10-year-old Lily Peters.

“Complete shock,” the longtime Chippewa Falls resident and father of three said. “I started bawling…because…my daughters. I called them immediately and I asked one of them, ‘Have I given you enough hugs?’ It just hits hard because you feel helpless.”

Smiskey, who owns The Chippewa Store with his wife in downtown Chippewa Falls, said almost everybody in this community of 13,000 people has some personal connection to the tragedy.

Not knowing how else to cope, the Smiskey family has started selling buttons, stickers, yard signs, and other apparel at their store, with all proceeds helping Lily’s family pay for memorial services and counseling. On Wednesday, just hours after a court hearing for the juvenile suspect accused of killing Lily, families with young children flocked to The Chippewa Store to support Lily’s family.

“People that come in…they want to help,” Smiskey said. “Just trying to be a light wherever we can.”

The streets of Chippewa Falls are lined with purple in honor of 10-year-old Lily Peters, as the community grieves her death and wrestles with the fact that a 14-year-old has been arrested in her killing. @kare11 pic.twitter.com/6bPpwoVJrB

All throughout town, particularly on the main artery of Bridge Street, people have draped light poles with purple ribbons and other tributes to Lily. “Justice for Lily” signs hang on the windows of many businesses, and outside of Parkview Elementary just north of downtown, families continue to visit a memorial to Lily almost every hour.

Teri Ouimette, the executive director of Chippewa Falls Main Street, Inc., is helping to distribute ribbons and signs to businesses and residents throughout the city. Her office remained busy Wednesday afternoon as people came inside to pick up items.

“I think everyone wants to feel like they’re helping in some way,” she said. “This is like nothing we’ve ever experienced. I don’t even think I have the vocabulary.”

Ouimette said many parents expressed a sense of fear early in the investigation, before Chippewa Falls Police announced the arrest of a 14-year-old suspect in connection with Lily’s killing.

Now, that fear has turned to a mix of anger, confusion and many other emotions.

“I think a lot of people are still shocked, and it’s just taking it in, and realizing that bad things happen,” Ouimette said. “There’s just a lot of quietness going around.”

RELATED: Why is teen suspect in Lily Peters’ death being prosecuted in adult court?