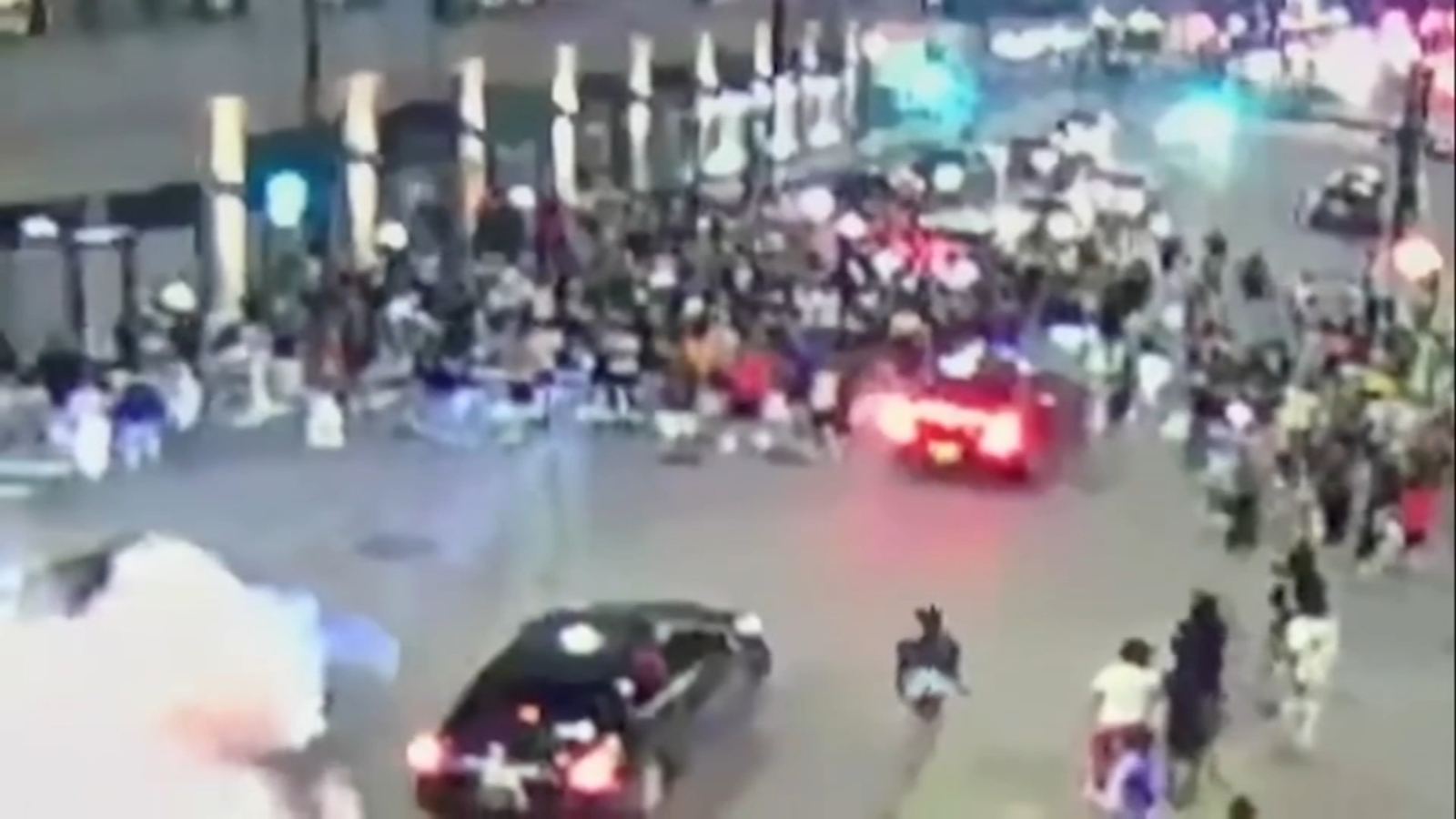 Upwards of 400 people flooded the area around 8:30 pm, blocking streets, climbing on CTA buses and throwing bottles. CPD officers responded about 9 pm to the 1600-block of North LaSalle Drive, near Clark Street and North Avenue, and monitored as the group left the area.

CPD said there were no injuries reported, but Termaine Patterson, 18, of Chicago was arrested about 11:25 pm in the 1700-block of North Clark and charged with reckless conduct. He tried to “cause bodily harm” to several individuals, CPD said.

Neighbors watched it all play out from their buildings.

“The crowd was a little unsettling for sure just because we were worried that they would maybe migrate more that way. And we’ve had one off break-ins in our building before,” said Emma Kate Sterry, who lives nearby.

Alderman Smith’s office said in a statement that about 400 people showed up to an unpermitted event at North Avenue Beach. The event, promoted on social media, encouraged people to bring alcohol and drugs and that there would be, “a drinking contest, boxing matches, and twerking contests.”

“Illicit events that are run by promoters are wrong for our city,” Smith said.

Numerous videos posted on social media of the incident showed a large group in the area around the North Side Old Town neighborhood.

“Jumping on cars, racing motorcycles,” said Jonathan Swain. “Frankly, I was just waiting for the gunshots… It’s going to be a long, hot summer if this is going to be the case.”

Smith said police had advanced warning of the event and officers checked for alcohol at the beach entrances. After police got the crowd to disperse from the beach, Smith said people from the crowd began gathering at nearby gas stations and businesses. She said officers did a good job removing the crowds. But Old Town Triangle Association Vice President Chris Nelson said more communication from police would’ve been appreciated.

“Great job for them for doing that. It would’ve been helpful if they let the community know as well that they are aware of this and that they’re prepared for it. I think that goes along way,” Nelson said.

At a meeting Thursday night, residents joining Chicago police and other city leaders to discuss what happened and the effort to make sure it doesn’t happen again.

Alderman Smith praised police for how they handled hundreds of people pouring on to the streets of Old Town.

“No one got hurt,” 43rd Ward Ald. Michele Smith said. “No policemen got hurt. No adolescent or young adult got hurt. That is a successful plan.”

“There had to be a tremendous reallocation of resources by the police in the neighborhood,” Old Town resident Joe Jacobazzi said. “There are probably more important places for the police to be than breaking out some kind of problem on the beach.”

“My understanding is that police picked up that there was this party,” said David Montgomery, chairman of the Old Town Triangle Safety Committee. “They were ready for it. I think when they dispersed people from the beach it didn’t quite turn out as they wanted it to.”

Alderman Smith says in the future, closing the beach would not be the best idea because so many other Chicagoans will be affected.

“It’s a bad plan to erect barricades,” Smith said. “Because then you’re kind of putting people in a position of then, what are we supposed to do?”

Full statement from Alderman Smith:
“Yesterday, about 400 people gathered at an unpermitted large-scale event at North Avenue Beach. The event was anonymously promoted via social media and encouraged people to bring their own alcohol and drugs. The event advertising said it was open to all ages and would feature a drinking contest, boxing matches, and twerking contests.

“Police received advance warning of the event and placed extensive resources at every entrance to the beach, including the pedestrian bridge. This was in order to give police an opportunity to search for liquor and any other illegal items. Police recovered a significant amount of alcohol Police also prevented any car caravans from loitering at the entrances to the beach.

“Party attendees generally ranged from 14 to 21 years of age. An estimated 400 people came to the beach, and while almost all the liquor was removed the group still engaged in many illegal activities including climbing the lifeguard towers, and climbing on CTA buses. This resulted in situations where injuries were probable and the police acted to ensure the well-being of all involved was protected.

“In order to prevent injuries, the police initiated a process to direct people to leave the beach. As the group dispersed, residents observed gatherings at local gas stations and other businesses. In all cases, no one was hurt, and very few arrests were The area was cleared between 11 pm and midnight.

We want to thank the Chicago Police and 18th District Commander Jon Hein for their handling of what could have been a tense situation.

“The 43rd Ward hosts hundreds of events every year. We do so in a manner that is safe and secure for participants and residents. The 18th District’s prompt and professional handling of this has sent a message that we will not tolerate unruly or unsanctioned behavior in our community. If you become aware of any events, such as this, occurring in our community please make the Chicago Police aware immediately.”