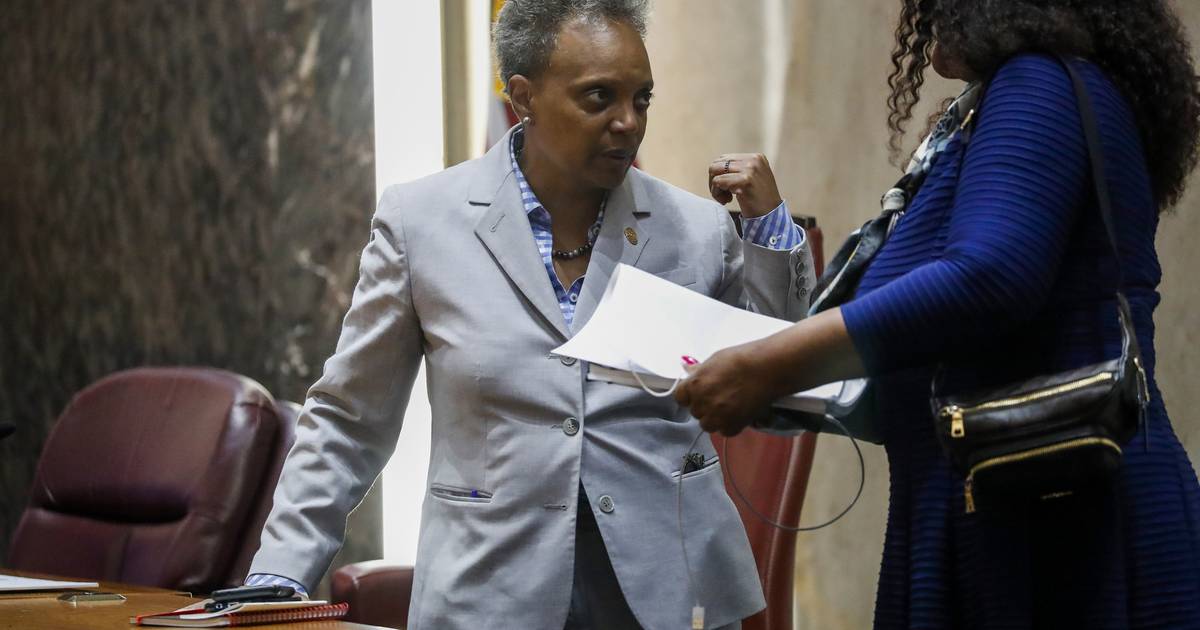 The Chicago City Council adopted a new map of the city’s 50 wards Monday, forestalling a ballot referendum on competing designs by Black and Latino aldermen and their allies and ending a racially charged confrontation over the boundaries between the two groups.

The map passed 43-7, just two more votes than needed to short-circuit the June 28 referendum when Chicago voters would have picked the design of the wards for the next decade. The vote came three days before a deadline to avoid having the referendum go to voters on the June primary election ballot.

For lots of Chicagoans, their alderman is by far their most intimate and important relationship with an elected official. Starting next year, thousands of residents will need to get used to a new point of contact for many local services and complaints thanks to the redrawn map putting them in different wards.

Mayor Lori Lightfoot and many aldermen in recent days have said the council compromising is a better outcome than the referendum, and they hope the body can move past the months of acrimony.

The map that passed has 16 Black-majority wards and 14 Latino-majority wards, one fewer Latino ward than the Latino Caucus wanted in light of Latino population gains citywide. It also includes Chicago’s first Asian-majority ward.

Northwest Side Ald. Felix Cardona, 31st, was one of the first Latino aldermen to sign on to the compromise. The deal puts residents first by avoiding the potentially costly, divisive referendum, he said.

“As caucus members and non-caucus members we had to come to a compromise, and this was the best compromise for us,” Cardona said. “But we will continue to fight for our Latino community, for our businesses and so forth, because it doesn’t end here. It doesn’t end today.”

But while it got support from the overwhelming majority of aldermen, the new map is not universally loved.

Far South Side Ald. Anthony Beale, 9th, said he tried to work with colleagues early on but was locked out of the process as the council Rules Committee set out to make changes to his boundaries without his input.

“I guess I’m one of the few that’s not part of the kumbaya club,” Beale said. This is not a compromise. This is a backroom deal map.”

That drew an angry rebuke from Black Caucus Chair Ald. Jason Ervin, 28th, who said Beale walked away from his Black Caucus colleagues during the map design process. Beale demanded an apology, which was not forthcoming from Ervin during the debate.

Sign up for The Spin to get the top stories in politics delivered to your inbox weekend afternoons.

Aldermen Maria Hadden and Byron Sigcho-Lopez voted in favor of the map, but urged the city to adopt processes that allow more input from residents in the future.

One criticism of the new map is that it breaks up the South Side Englewood neighborhood in multiple wards.

“I don’t think it gets any better than when five aldermen get together and say we’re committed to come together and work for the community,” said Ald. Michelle Harris, who as Rules Committee chair has been central to the remapping process. “…Englewood aldermen are going to be working together for the betterment of Englewood.”

Elsewhere in the city, many 36th Ward residents are angry about the strange snaking design of their new ward.

Villegas chairs the Latino Caucus and led the unsuccessful fight for 15 Latino wards. He has pointed to the design of his ward in the new map as “a real red flag” for anyone looking to file a lawsuit challenging the boundaries.

And Latino Caucus mapmaker Frank Calabrese noted compactness is a legal requirement for designing legislative districts in Illinois. “The 36th Ward is drawn to be as not compact as possible” under the compromised map, Calabrese said.

Harris said which ever alderman holds the seat in that “’really long ward, you can be really creative in how you serve your ward. You can have remote locations where you’re there multiple times in a month.”

As to whether it could withstand a legal challenge, Harris said: “At any point there can be a multitude of challenges … but I’m almost certain we worked really hard to create a map that will stand.”

Despite his no vote, Villegas, who is running for Congress, has also said he hopes the council can put the map fight behind it.

The map will take effect with the 2023 municipal elections, though the new wards will be used in the November election to determine where voters need to go to cast their ballots.

Until after the next municipal elections, aldermen continues to represent the wards they were elected to in 2019, though observers will be watching to see if council members start making decisions to try to curry favor with voters in the new wards who they’ll need to impress to win re-election next year.