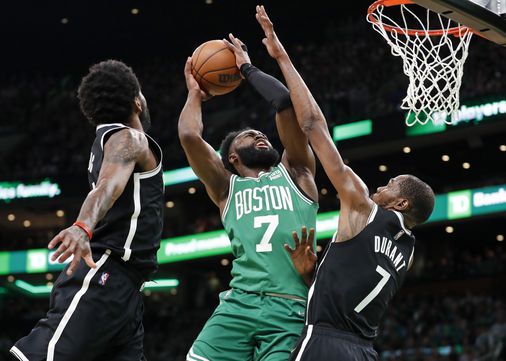 Jaylen Brown had 22 points and Jayson Tatum added 19 for Boston, but both players were mostly quiet until their strong fourth quarters. The Celtics stayed afloat thanks to key contributions elsewhere. Grant Williams poured in 17 points, Daniel Theis added 15, and Payton Pritchard helped spark the fourth-quarter comeback.

Bounce around the NBA with our Celtics-centric look at the latest happenings on and off the court.

Nets stars Kevin Durant and Kyrie Irving were mostly silenced. The duo combined to make just 8 of 30 shots, although Durant finished with 27 points after hitting 18 of 20 free throws. Still, his shooting struggles over the first two games have become an issue for the Nets.

The Celtics trailed by 10 points at halftime and punched back at the start of the third, as they’ve done so often this season. They twice tied the score but were unable to push in front, and the Nets took a 90-85 lead to the fourth.

The Celtics were behind, 92-85, with 10 minutes left in the fourth quarter and had never held a lead in the game. Then they seized control with a 14-2 run that was sparked by Brown, who drilled two 3-pointers and had two strong finishes inside. His dart with 6:03 left stretched Boston’s lead to 99-94.

Tatum struggled for most of the night, but he helped finish off this win by going on a 7-0 run of his own, capping it with a 3-pointer that stretched Boston’s lead to 108-96. The Nets scored just 4 points over the first 8:14 of the fourth.

Observations from the game:

▪ A loud “Kyrie sucks” chant broke out on the Nets’ first possession, and there were a few more when the crowd was boiling near the start, including one that had an expletive in it. But as the first quarter went on, there were mostly just boos. Irving, who had 39 points in Game 1, didn’t have much of an impact in the first half, though, tallying 6 points on 3-of-6 shooting.

▪ Dorchester native Bruce Brown, who had a brief and, frankly, undeserving time as this series villain when he essentially said the Celtics’ interior defense isn’t as good without Robert Williams in the middle, dominated at the start. Brown scored the game’s first 9 points and finished the first quarter with 12 after drilling both of his 3-pointers. ESPN reported earlier Wednesday that Nets guard Ben Simmons could make his season debut as early as Game 3, and he could eat into Brown’s playing time. Brown’s play will make that a tough call, however.

▪ The Celtics’ offense, meanwhile, appeared disjointed at the start. Boston went nearly three minutes without a point, and seven minutes passed before anyone other than Al Horford or Theis converted a field goal. Tatum’s struggles were most pronounced. At times he reverted to spending too much time complaining to the officials. He was held without a field goal before getting an easy dunk off a turnover with a little more than a minute left in the second quarter, and he followed that with a 3-pointer, perhaps giving him some momentum for the second half.

▪ Brooklyn was on the verge of blowing the game open late in the first quarter before Grant Williams provided a lift off the bench. He drilled three consecutive 3-pointers and also had a nice block of Bruce Brown on the Nets’ final possession of the first. The Celtics will need outside scoring boosts such as this one if they plan to make a sustained run during these playoffs.

▪ The first half mostly belonged to the role players, really. Bruce Brown and Grant Williams shined for their respective teams, and Nets veteran Goran Dragic dominated the second quarter, when he scored 13 of his 16 first-half points. Dragic, who turns 36 next month, remains a crafty finisher.