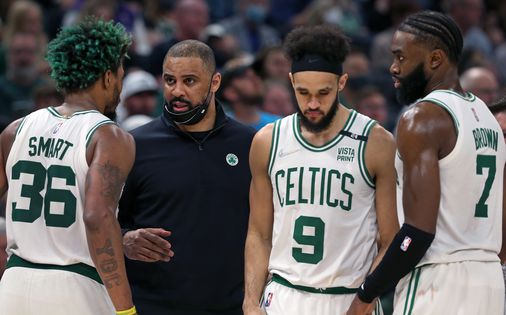 MIAMI — Celtics guard Derrick White will miss Game 2 of the Eastern Conference finals against the Heat Thursday night because he has left the team to be with his wife, Hannah, for the birth of the couple’s child, coach Ime Udoka said.

“It’s, you don’t want to say tough situation,” Udoka said. “It was expected pretty soon. [His wife] was going to get induced in between some games, and things happen in life, so we support our guys and always want them to be there for situations with their family.”

White, who started in place of injured guard Marcus Smart in Game 1, is averaging 11 points, 3.5 assists, and 3.4 rebounds during the playoffs.

Smart, meanwhile, could return after being sidelined with a foot sprain. Udoka said Smart will test out the injury before the game but is “looking better.”

Forward Al Horford, who missed Game 1 because of COVID-19 protocols, is listed as doubtful for Game 2, and Udoka said he is awaiting the results of further testing.

Bounce around the NBA with our Celtics-centric look at the latest happenings on and off the court.

“He was not feeling ill,” Udoka said. “Like I said the other day, he’s feeling fine. He’s feeling OK. It’s something that was unexpected. He’s feeling fine since that day. There’s protocol and testing he has to pass, and we’ll go from there.”

If Horford tested positive for COVID-19, he would need to either produce two negative PCR tests over a 24-hour period or have a viral load below a certain threshold four days after his first positive test.

This is Horford’s third time in protocol this season. He was sidelined in October and December. Horford told the Globe in April that he is fully vaccinated against COVID-19. Players who are fully vaccinated are no longer required to be tested daily unless they exhibit symptoms.

Udoka was unavailable for his news conference Wednesday because of a non-COVID illness, but he said he is fine and will coach Thursday’s game.

White was acquired in a trade with the Spurs in February and has emerged as an essential piece of Udoka’s bench. Although he has struggled a bit as a shooter, his passing and defense have been valuable. The Celtics have outscored opponents by 9.5 points per 100 possessions with White on the court during the playoffs, the best net rating on the team among regular rotation players.

With White out, Aaron Nesmith could be called upon for the second game in a row after being left out of the playoff rotation up to this point. He had two spectacular blocks in 11 minutes of action in Game 1.