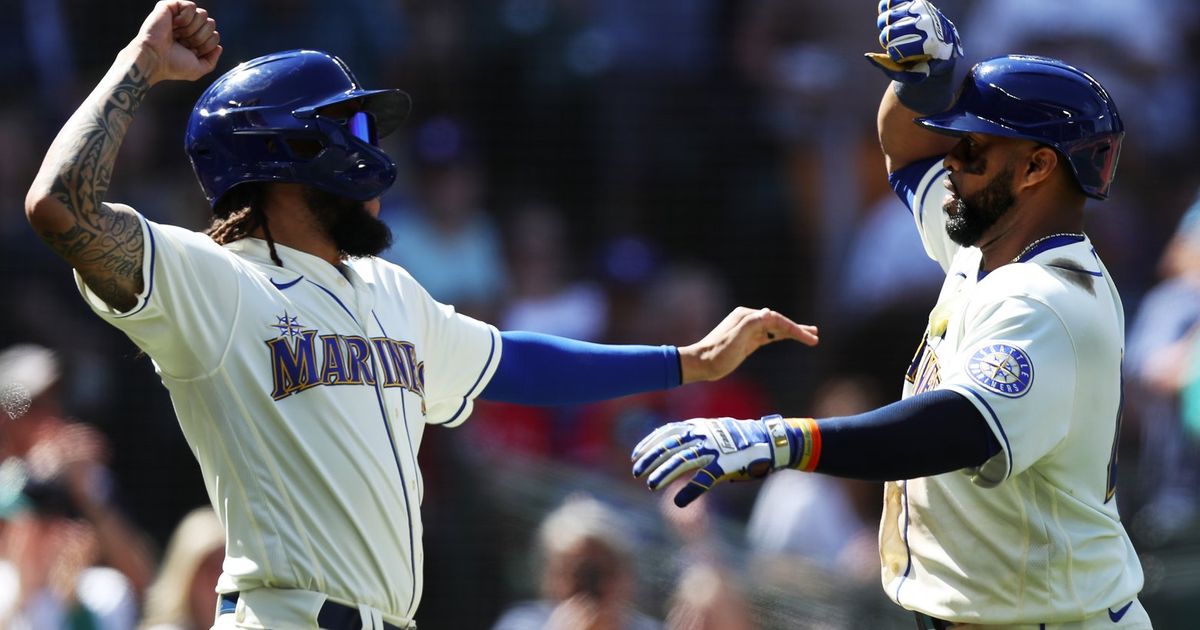 At the time, it seemed like an act of desperation.

At the time, the Mariners were past the point of being desperate and knew they couldn’t allow their situation to worsen.

They were struggling to find offense. Ty France, their best hitter, had just been placed on the injured the list. And they were going to lose JP Crawford, Jesse Winker and Julio Rodriguez to suspensions for their roles in the brawl with the Angels.

On the morning of June 27, they acquired Carlos Santana and just over $4 million in cash (essentially the remainder of Santana’s 2022 salary) from the Royals in exchange for right-handers Wyatt Mills and Will Fleming.

The 36-year-old switch-hitting first baseman/designated hitter was slowly picking up his production after a forgettable first two months of the season.

When the trade was announced, Mariners manager Scott Servais talked about Santana’s professionalism, his ability to work counts and get on base while also providing a strong, calming presence in the clubhouse.

But over the past few days, a rejuvenated Santana, buoyed by the adrenaline of winning baseball and legitimate postseason hopes, has been something more for the Mariners.

On Sunday, Santana’s towering moon ball of a homer to right field in the eighth inning proved to be the difference in the Mariners’ 6-5 victory over the Blue Jays.

It was the second straight game where Santana, who also hit a solo homer in the second inning, provided the go-ahead home run in late innings to propel the Mariners to victory. On Saturday night, he hit a two-run homer off All-Star pitcher Alek Manoah in a 2-1 win.

“I think he’s been here 12 days and I think we’re 11-1,” Servais said. “He has added so much to our team, but nothing more than obviously the home run last night and a couple of more home runs today.”

His heroics helped the Mariners secure a four-game sweep of the Blue Jays and their eighth consecutive win. The Mariners improved to 45-42 and moved into a tie for the third wild-card spot with Toronto, which has lost nine of its last 10 games.

Santana understood that a large portion of his value to the Royals and now the Mariners was his experience and his ability to connect with young players. But he’s now in a situation where his production also matters.

“Honestly, it’s different,” Santana said of the switch in teams and situations. “We are playing every day to make it into the playoffs. We were talking about it this morning about how fun it is to make the playoffs and how you have to keep pushing in the second half. It’s a different energy.”

When Bo Bichette smoked a solo homer off Penn Murfee into The ‘Pen in the seventh inning to break a 5-5 tie, it appeared that the mass of Blue Jays fans who invade Seattle annually for this series might finally get to celebrate a win.

Instead, they watched as catcher Gabriel Moreno dropped JP Crawford’s infield pop up in front of the mound to start the eighth inning.

After sending a blistering line drive over the wall in right field for a solo homer in the second inning, Santana came to the plate having to face funky side-armer and Puyallup grad Adam Cimber.

After falling behind quickly 0-2, Santana was able to get on top of an 87-mph fastball at the top of the strike zone. He hit a high fly ball that just kept carrying. Aided by a rare sunny and warm afternoon, it cleared the wall in the right field for a two-run homer.

“I was trying to make contact,” Santana said. “I think he missed with the pitch.”

It was Santana’s 18th go-ahead homer in the seventh inning or later since 2015. — the most of any player in that span.

The Mariners dugout and a large portion of the 37,694 in attendance exploded in celebration.

Paul Sewald closed out the win with a drama-free 1-2-3 ninth inning, notching his 10th save.

“Chaos ball is back,” Servais said. “We saw it today. We got a few breaks. Anytime you sweep a team, certainly a quality team like the Blue Jays have, you’re gonna need to get a few breaks and we got a few today.”

Seattle was down 1-0 after Logan Gilbert’s first pitch, which George Springer put over the wall in left field for his 51st career leadoff homer.

Facing a bullpen outing from the Blue Jays, the Mariners found themselves trailing 4-1 going into the fifth inning.

But they picked up a pair of runs in the fifth. The first came courtesy of the poor leather webbing in Vlad Guerrero Jr.’s first-base mitt. With the bases loaded, Sam Haggerty hits a ground ball back to pitcher David Phelps, who fired home to Moreno for the first out. But the inning-ending double play wasn’t completed because Moreno’s throw to first broke through Guerrero’s glove and rolled into the outfield. Adam Frazier scored on the play. Julio Rodriguez followed with an RBI single, beating out a ground ball to shortstop Bo Bichette.

The Mariners tied the game an inning later when Santana was hit by a pitch by Tim Mayza, advanced to second on a wild pitch, moved to third on Eugenio Suarez’s infield single to Mayza and scored on Cal Raleigh’s sac fly.

“If you keep putting pressure on teams, you make them make plays, good things happen,” Servais said. “Credit to our guys. It was really awesome weekend with great crowds, a lot of energy in the ballpark. This is what Major League Baseball is supposed to be about. A lot of our young players are getting to experience it for the first time in this rivalry, and it was great.”