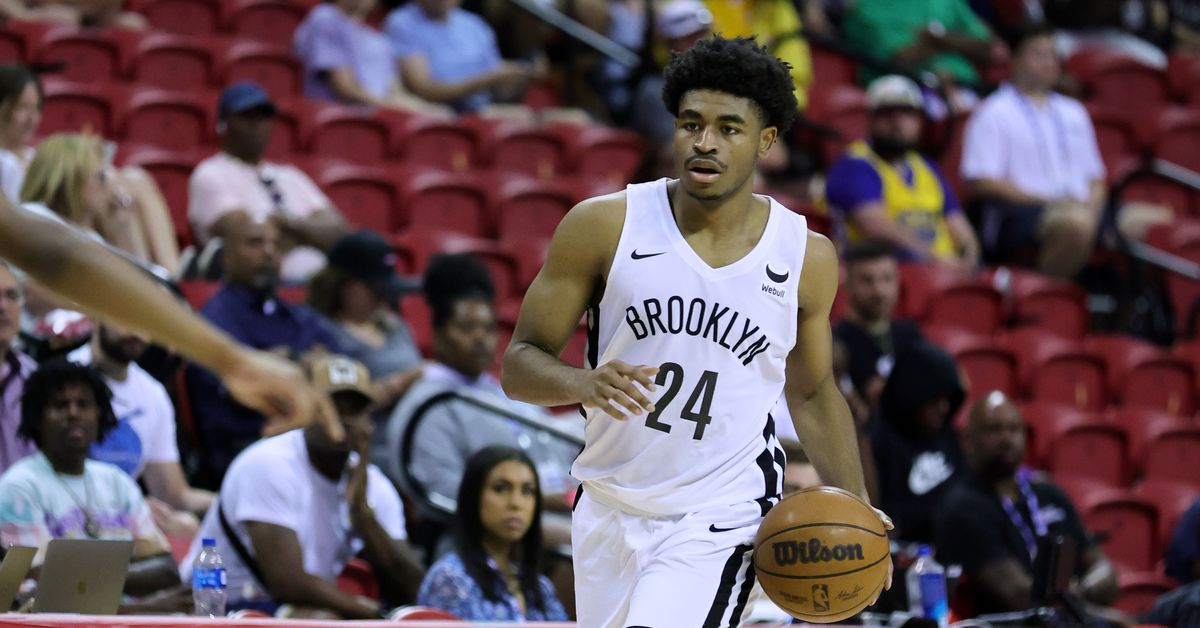 For the second straight game, it was Cam Thomas and David Duke Jr. leading the Nets Summer League show, taking down the 76ers, 91-84 at the Thomas and Mack Center in Las Vegas. The young Brooklyns are 1-1.

Cam Thomas finished with 26 points, including a perfect 15-of-15 from the line. He also recorded seven assists, the most he’s ever had in any game since at least Oak Hill. Duke Jr., who is a restricted free agent, again topped 20 with 21 points on 6-of-11 shooting.

Day’Ron Sharpe who had the dunk of the summer league finished with 13 points, 11 boards, four assists, three steals and two blocks…

As Adam Caporn, the Nets Summer League coach, said, “I enjoyed it.”

The game was close throughout, neither side mounting enough of an offense to pull away.

The Nets entered the fourth with a thin lead, 67-66, but outscored the Sixers, 24-18 in the final stanza to go ahead late and hold it. With 3:45 left, the Nets had only stretched the lead to 78-76 as the Sixers kept coming back. The rest of the quarter, the Nets outscored the 76ers, 13-8. In that stretch, Thomas had six points, Duke four.

Post-game, Thomas spoke about how the Nets have wanted him to improve his playmaking.

“Yeah, I just want to come on here and show that [I] could do it,” Thomas said. “It’s what they see, and whatever they see how good I am at it. I think I’m really good at it. But there’s always something.”

“Not a mandate: Just part of every young player’s growth,” Caporn said. “Cam is an elite scorer. He’s really bought into his growth as a decision-maker, and he showed that,” Nets summer league coach Adam . “Showed it last game, too, but reflected in the game and he’s getting better every game.

“And did what he does in terms of leading us in the fourth quarter and in stretches, still scoring. I see him being an elite pick-and-roll player as time goes on. He can find the roll, throw lob passes, see the floor and is so strong holding on the ball and in the key lane in tight spaces. That’s a good recipe.”

“With him as great of a scorer as he is, he’s using that as his go-to — using his aggression to create the plays for him,” Duke Jr. said of Thomas. “He has great instincts. Being a good scorer just makes it that much easier to be a pass, because everyone’s going to load up on you. He understands that for sure, you can see it game by game.”

In addition to the Nets three key players, Kessler Edwards and Alondes Williams, the Nets two-way, redeemed themselves after some bad numbers in the Nets loss to the Bucks two days ago. Edwards finished with 10 points on 4-of-10 shooting, including 2-of-5 three’s, one in that final stretch. Williams who didn’t record an assist vs. Milwaukee had five Sundays to go along with nine points and four assists.

Overall, the Nets looked more ready than they did Friday although they still need to show they can reduce turnovers, giving up 22.

Thomas noted that teammates who are newcomers to the Summer League look to him for guidance, even though he and Sharpe remain the youngest players on the 12-man roster, both still 20.

“It’s crazy when you look at it. A few weeks ago, I thought about that because Day’Ron [Sharpe] was like, ‘We’re still the youngest on the team’ and I was like, ‘Man, you are right. We are still the youngest on the team, even though we’ve got more NBA experience.’ So just for them to look at me like that, I don’t take that for granted, because they don’t have to listen to me. I’m younger.”

Steve Nash was on hand for the 12:30 pm local time start. He was inducted into the Canadian Basketball Hall of Fame in the morning. He sat near Sean Marks and other Nets executives, and joined by his lead assistant, Jacque Vaughn. Also in the rooting section for a second game: Ben Simmons and Royce O’Neal, who were seen talking to Nash and Marks. Simmons declined questions from the beat writers who tried to talk with him at the half but did so in a joking mood, per reports. He also did this…

Ben Simmons posted a picture and a video with new Net, Royce O’Neale on IG. Both clearly were together watching the Nets at Summer League earlier today.

Nash didn’t talk to the media other than Zara Stephenson of ESPN. Stephenson said that Nash had advised Cam Thomas to focus on his playmaking. When Stephenson asked Thomas post-game about the advice, he smiled and said, “It is what is.”

But while some fans suggested the 20-year-old was dissing his head coach on national TV, it seems more likely that he was dissing the narrative that he can’t pass. As Dave Early of SB Nation noted, Thomas has a history of annoyance with such questions…

Or as Steve Lichtenstein, a veteran Nets reporter, wrote on his substack, Steve’s Newsletter,

I’m going to advocate that Thomas’ demeanor was more about the repetitiveness of the query, as he’s been labeled, not all that incorrectly, as nothing more than a volume scorer at least since his lone college season at LSU, where he averaged just 1.4 assists per game while putting up 17.2 field goal attempts per game. Maybe the youthful indiscretion was merely a case of lashing out at what he perceived as a constant drum of criticism, not a direct shot at his coach.

Cam Thomas is averaging 28.5 points so far over these two games. In his six-game Summer League career, the 20-year-old is averaging 27.5, having led the Vegas circuit last season at 27.0 over four games.

The Nets play next on Tuesday vs. the Grizzlies at 6:00 pm ET at the Cox Pavilion. The game will air on ESPNU.