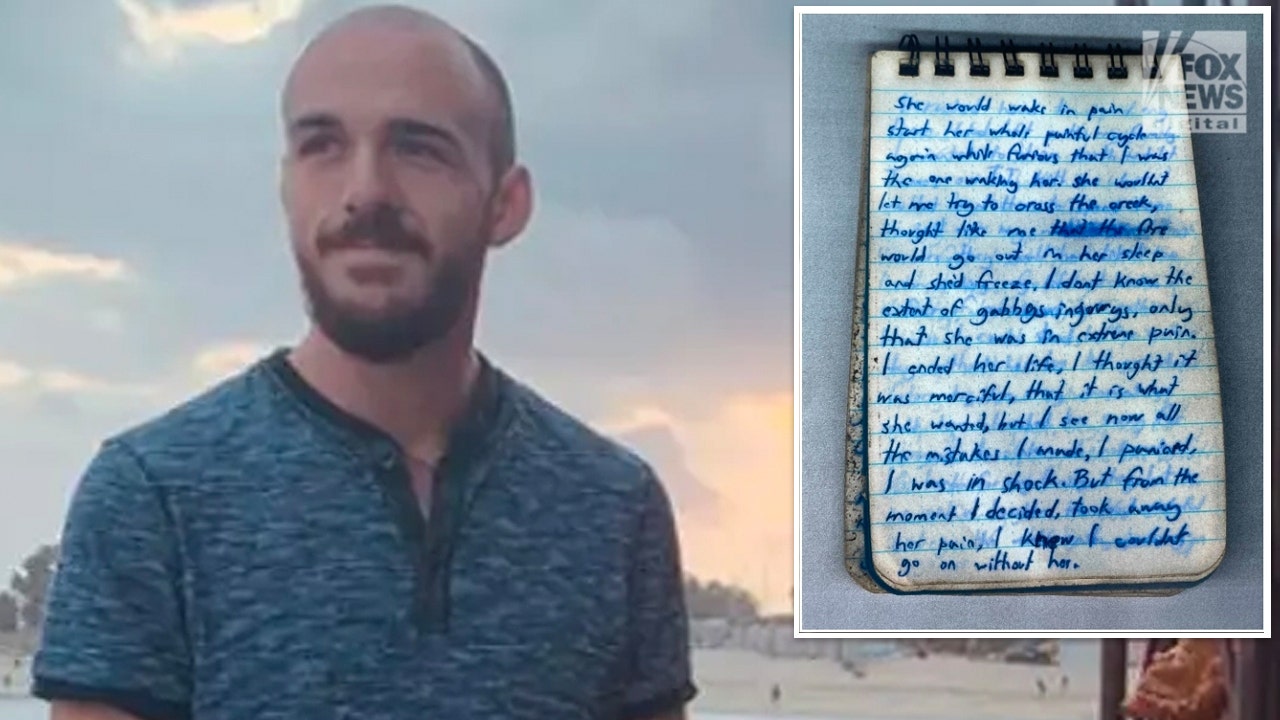 TAMPA, Fla. – The first public glimpse of a confession Brian Laundrie left in a notebook in the florida swamp where he killed himself last year reveals his final words.

“I ended her life,” reads the note, which the FBI recovered from the Myakkahatchee Creek Environmental Park on Oct. 20, 2021. “I thought it was merciful, that it is what she wanted, but I see now all the mistakes I made. I panicked. I was in shock.”

Laundrie wrote that he chose to end Petito’s life after she injured herself when she fell in Wyoming. He also wrote: “From the moment I decided, took away her pain, I knew I couldn’t go on without her.”

Attorneys representing the Petito-Schmidt and Laundrie families met at the FBI’s Tampa Field Office on Friday. Fox News Digital has obtained copies of the notes scrawled by Laundrie before he took his own life.

“Please do not make life harder for my family,” the notebook states, “they lost a son and a daughter and a daughter – the most wonderful girl in the world. Gabby I’m sorry.”

Earlier in the note, he wrote: “I am sorry to my family. This is a shock to them as well [as] a terrible grievance (sic).”

A portion of the notebook that Brian Laundrie left. (Michael Ruiz/Fox News Digital)

Fox News Digital tailed Laundrie’s parents to the park that morning, where they met a North Port detective and a member of the FBI and set off into the swamp for a look at where they believed their son had disappeared to weeks earlier. Extensive searches had been hindered by floodwaters until that point.

Christopher Laundrie stumbled across a dry bag that later turned out to belong to his son. A notebook collected by the FBI that morning contained the confession.

“Today the Petito family attorney, Patrick Reilly, and myself met with the FBI in Tampa to sort through and take possession of the personal items that belonged to Gabby and Brian,” Laundrie family attorney Steve Bertolino told Fox News Digital Friday. “As part of this return of property in FBI custody I was given Brian’s notebook and I have turned [the] same over to Chris and Roberta Laundrie.”

The FBI revealed in January that investigators found Brian Laundrie’s confession in the notebook, which had been underwater for roughly five weeks.

Gabby Petito is believed to have been killed around Aug. 28. An FBI-led search discovered her remains in the Bridger-Teton National Forest on Sept. 19. A Wyoming coroner ruled her death a homicide by strangulation.

Read the text of the full note below (mobile users: click here to read)

Brian Laundrie returned home to his parents in North Port, Florida, on Sept. 1, police said, citing a license plate reader recording of her van rolling into town. According to the FBI, he also sent fake text messages from Petito’s phone in a bid to cover up the crime and stole her debit card.

The Laundries went camping on the beach at Fort De Soto Parksouth of St. Petersburg, and said nothing of Petito’s disappearance publicly.

Finally, on Sept. 11, Petito’s mother Nichole Schmidt reported her missing to police in her hometown on Long Island in New York. They contacted North Port police, who knocked on the Laundries’ door, where they put silence.

A lawsuit filed by Gabby Petito’s family is asking for compensation for their pain and suffering and alleges that Brian Laundrie spent a lot of time speaking with his parents and their lawyer before he left Wyoming on August 30.

On Sept. 13, Brian Laundrie snuck out into the swamp, despite hidden surveillance cameras set up around his house. That was the last time he was seen alive.

His father later voluntarily turned over the family’s guns to the FBI and said one might be missing. Investigators found a revolver near Brian Laundrie’s skeletal remains in the swamp.

Also nearby was a water bottle that likely belonged to Petito and other items belonging to the couple.

Bertolino said he was sharing the note’s contents “as a matter of transparency.”

“I will not be commenting further as there are still proceedings pending in court,” he said.