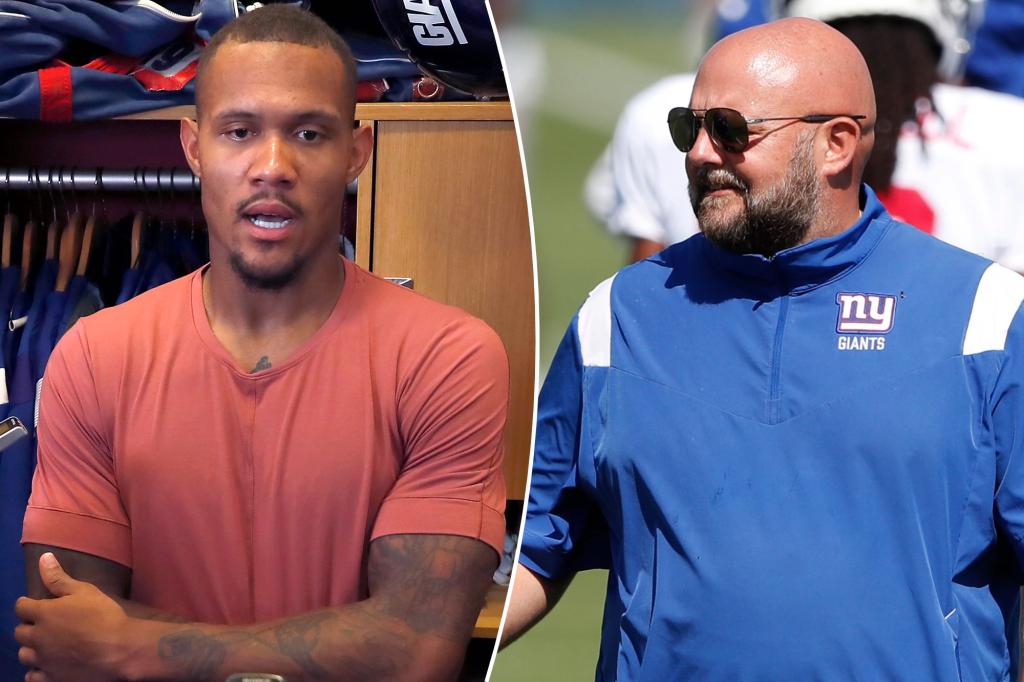 This needs to be a user relationship more than anything else. The most powerful telescope in the land cannot see Golladay on the roster in 2023. There is no legitimate way to envision him off the roster in 2022, given the salary cap implications inherent in jettisoning him and the fact he is guaranteed $13 million whether he plays gold sits.

It certainly looks as if the shelf life on Daboll and Golladay is this one season. Why not make it beneficial to both before they go their separate ways?

Golladay was on the field for only two snaps in Sunday’s victory over the Panthers. Three days later, he stood at his locker — there are places to hide, if so desired — and admitted he was dismayed with his lack of playing time. He did not sound off as much as he sounded confused.

A day later, Daboll was ready for this. He is off to a 2-0 start and has infused a team and a fan base with energy and hope. Two weeks in, Daboll and general manager Joe Schoen are batting 1,000. There will be swings and misses — perhaps the first whiff comes Monday night against the Cowboys — and the good ship Daboll will take on some water. It happens to every head coach and every team at the start of a reclamation project.

“I’ve been in the NFL a long time,” Daboll, 47, said Thursday. “I don’t know that I’ve ever been part of any team where someone’s not happy about something. I have great respect for Kenny. I’m glad he’s not happy he didn’t play, that shows competitiveness. He’s been a pro and we’ll see how it goes this week.”

Golladay, when asked about his relationship with Daboll, said, “I’m not here to be friends with coaches. They’re just co-workers to me.”

Daboll in his first months with the Giants has worked overtime connecting with players. He believes it is his strong suit. If Golladay’s “co-worker” line got to him he did not let on.

“No,” Daboll said. “I got faith in Kenny. I’ve got a good relationship with him. I’m sure for a player that’s 28 that’s not always the easiest thing.”

The Giants are undefeated despite Daniel Jones not reaching 200 passing yards in two games, with Richie James leading the team with 10 receptions and 110 yards and with a rushing attack that is fifth in the league and an offense that is averaging only 20 points a game .

The Giants are 2-0 with no receptions from Golladay and two receptions for zero yards from Kadarius Toney. It is more important to get Toney untracked — he has a chance to be back next season, he is a 2021 first-round pick and he is supposed to be a legit threat with the ball in his hands.

Golladay is a different deal. He will never live up to his contract (four years, $72 million) and he will never again lead the NFL in touchdown receptions (as he did in 2019) but he can resuscitate his career for his next team. If he cannot prove on the practice field that he offers more than hard-working David Sills then he has no motivation or the wear and tear on Golladay’s body has taken a toll and he is physically shot.

From the perspective of a first-time head coach, Daboll’s meritocracy is the way to build a program. Evaluate based solely on what you see on the field, without regard for salary, pedigree or draft status. By these measures, based on what went down this summer, Sills deserves to play ahead of Golladay. Burying Golladay is not the answer, though.

“Coach Daboll has been telling us, ‘It’s going to be a competition and whoever competes the best and does the best at practice is going to play in the game,’ ” safety Julian Love said.

This is what coaches say. Only some of them stick by it.

“When something is said like that you could see that as lip service, I guess,” Love said. “He’s staying true to his word, and I respect that. He’s staying fair.

Golladay does not see this as fair. Daboll said anyone harping on this is making a bigger deal of it than it really is. At 2-0, Daboll is dealing from a position of strength. Golladay figures to get on the field Monday night, and if he does not produce the MetLife Stadium crowd will give it to him. Fans tend to side with an unbeaten head coach over a highly paid, unproductive and unhappy player.