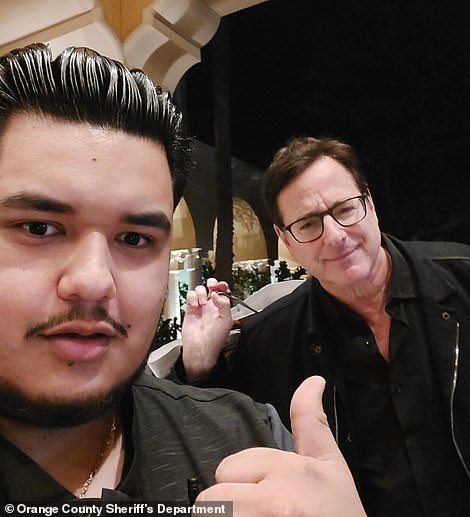 Bob Saget is seen healthy and smiling in a selfie taken by a hotel valet who parked his rental car at the Ritz-Carlton Orlando, Grand Lakes just before his death

Cops cataloged every surface and object inside room 962 at the Ritz-Carlton Orlando, Grand Lakes as they looked for anything that could have caused Full House legend Saget’s fractured skull.

The cache of images, released Tuesday by the Orange County Sheriff’s Office, include a shot of the padded headboard above the comedian’s bed as well as his walk-in shower, bathtub, desk and minibar.

Investigators never determined exactly what killed Saget, 65, but they suggested in their final report that he likely slipped and struck his head on either the headboard or the carpeted floor in the early hours of January 9.

‘Our purpose was to locate specific places or items in the room that could have caused the trauma found on autopsy,’ their report said.

‘The countertops, tables, nightstands, and other hard furniture in the room all had sharply defined edges and corners and were thought to be unlikely due to the fact that they would have lacerated the skin,’ the report added.

‘The counters in the bathroom and the shower stall were ruled out for the same reason. Most of the chairs and layers were thickly upholstered and were too soft to have caused the type and extent of injury Mr. Saget suffered. ‘As mentioned earlier, most of the suite was carpeted. The headboard of the bed was lightly padded and set slightly out from the wall.

‘These are listed here as possible mechanisms of injury, but nothing was located in the room that allows for a definitive conclusion.’ 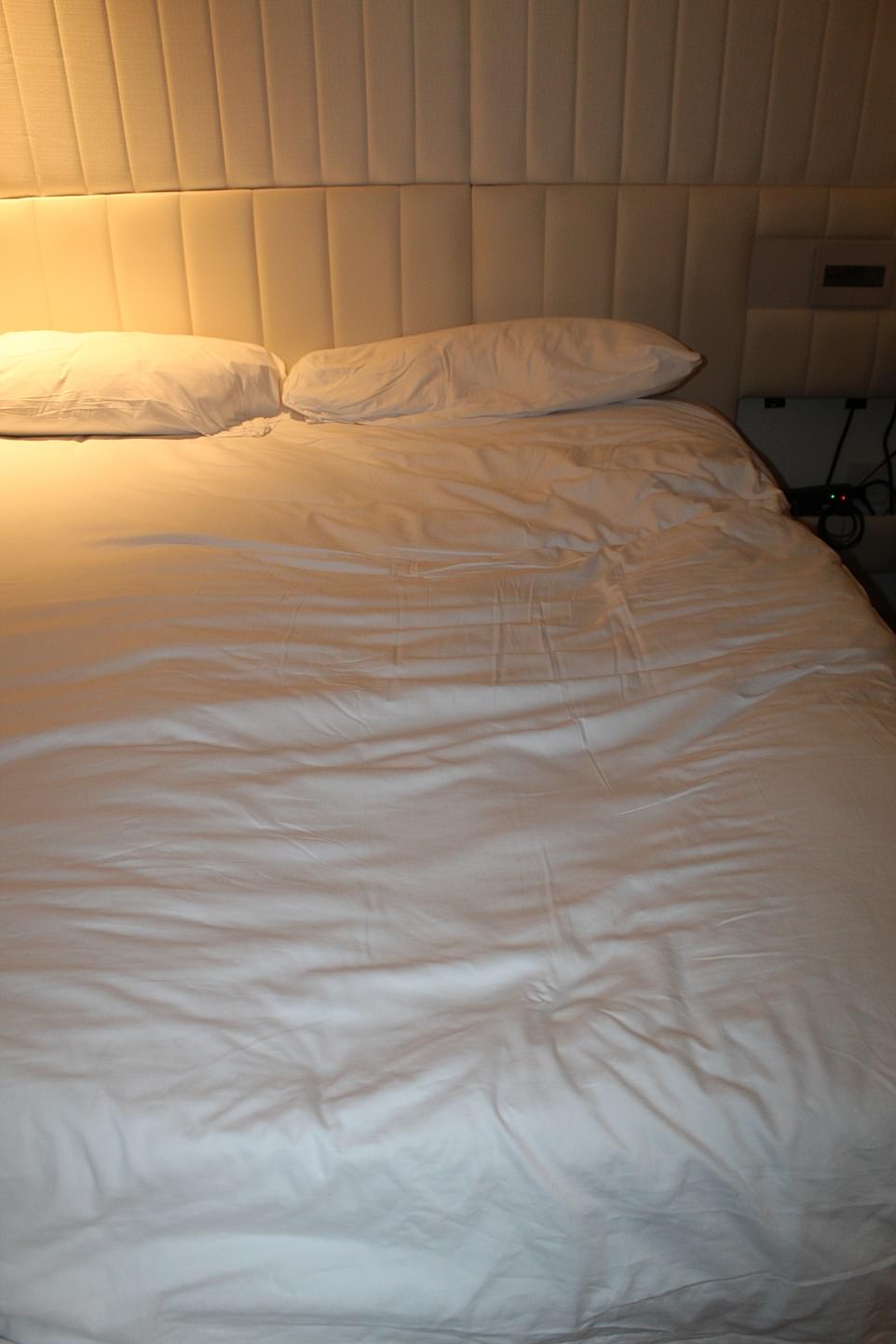 Crime scene photos show the inside of room 962 at the Ritz-Carlton Orlando, where Full House legend Bob Saget fractured his skull and died Cops cataloged every surface and object inside room 962 at the Ritz-Carlton Orlando, Grand Lakes as they looked for anything that could have caused Full House legend Saget’s fractured skull. Saget’s night stand showing his iPhone, iPad, glasses, AirPods, Chapstick and more are shown 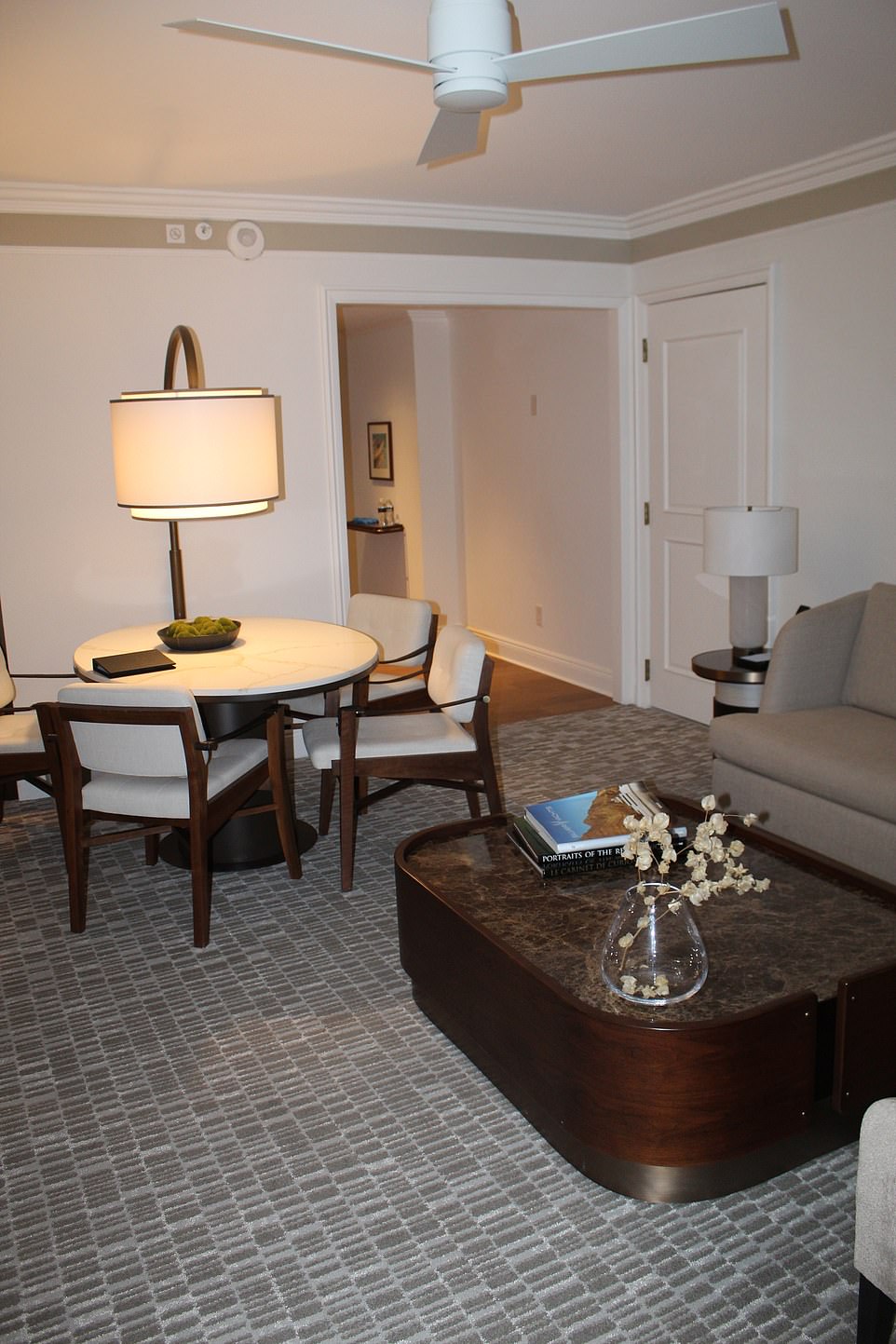 The cache of images include a shot of the padded headboard above the comedian’s bed as well as his walk-in shower, bathtub, desk and minibar 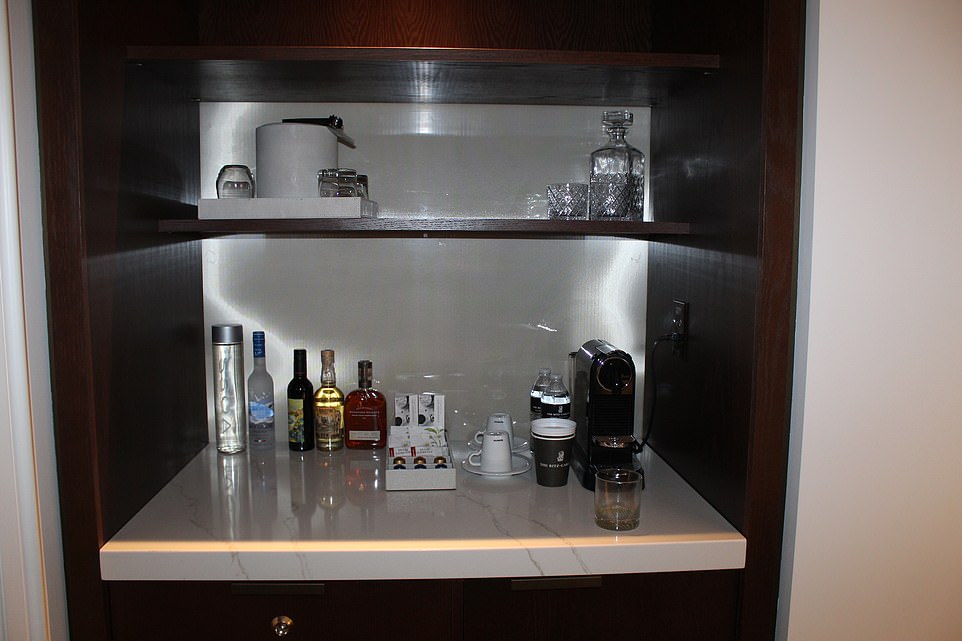 The barely-touched minibar in the hotel was room is seen in the crime scene photos. One cup appears to have been used 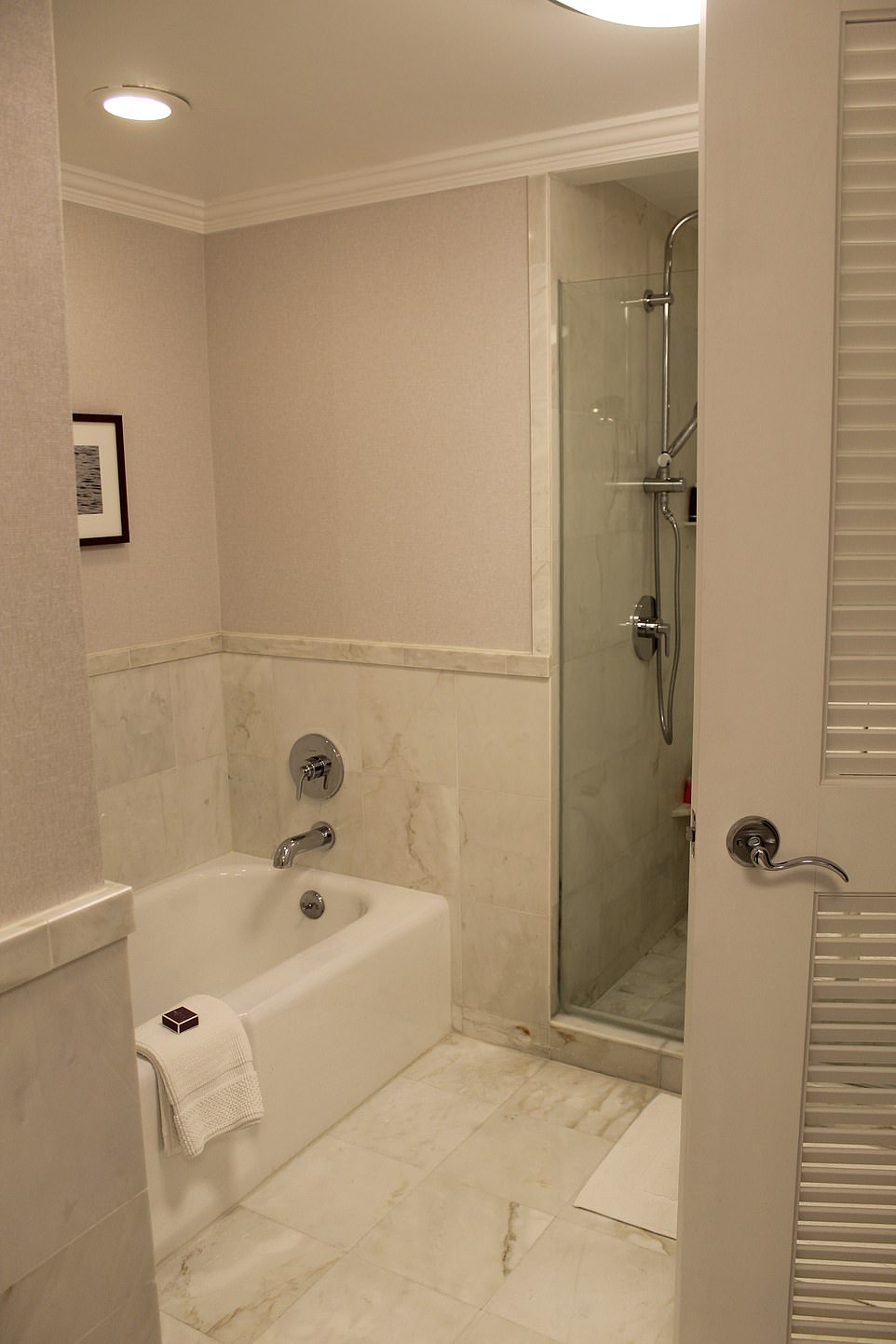 The photos were released Tuesday by the Orange County Sheriff’s Office. Saget had driven himself back from a stand-up gig two hours away in Jacksonville before handing over the keys to his Chevrolet Impala and walking into the Ritz-Carlton at 2:13am 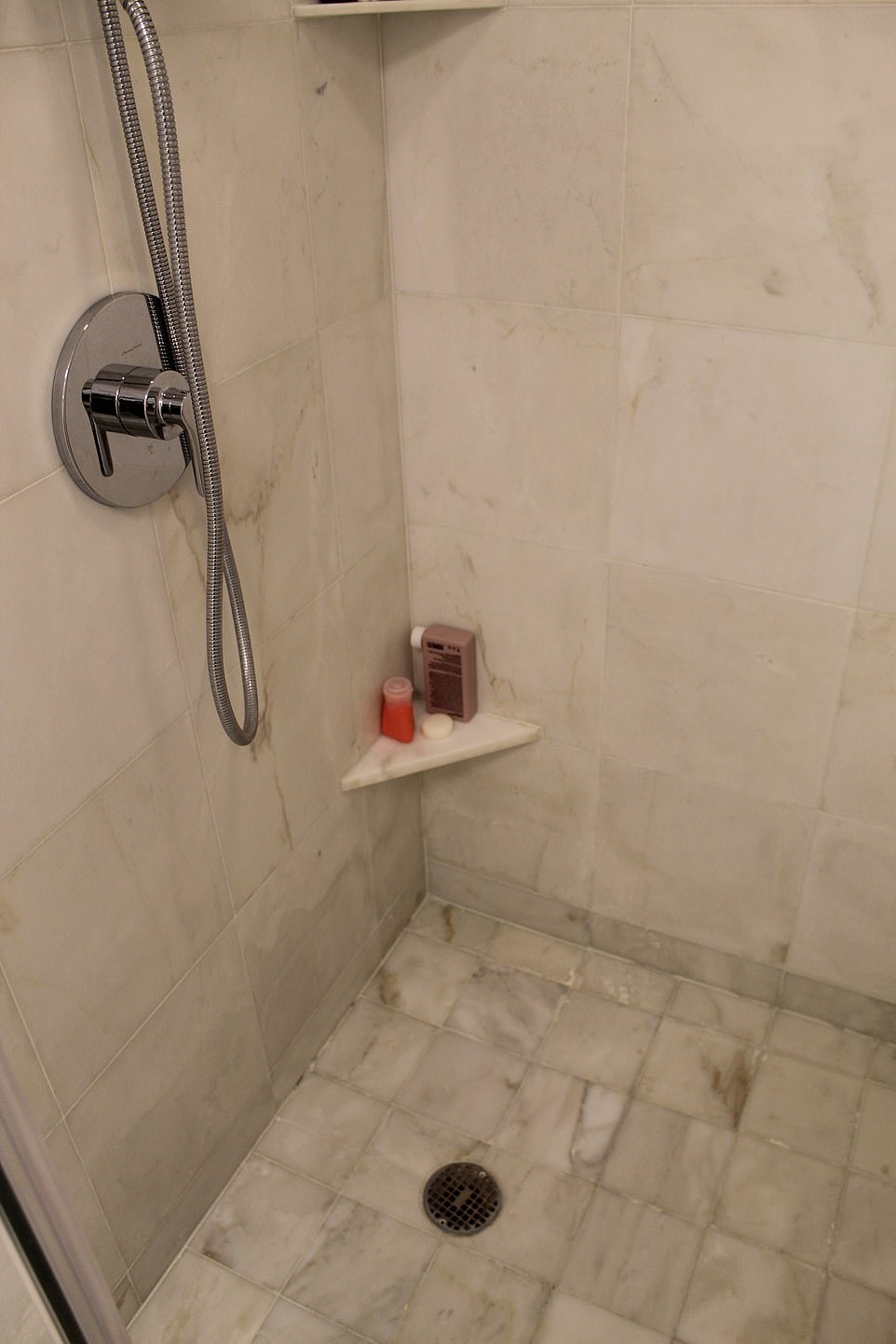 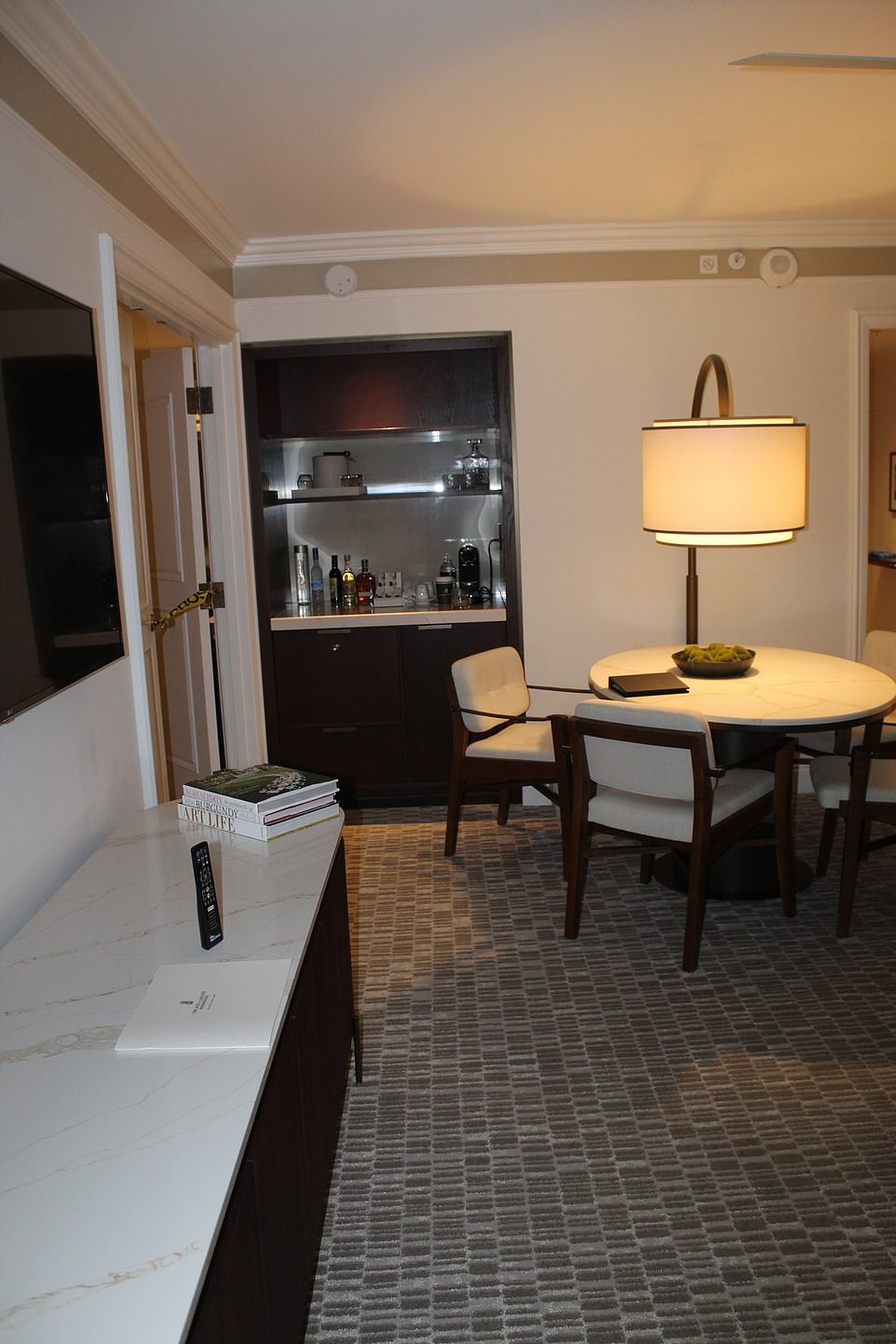 The door to room 962 was latched from the inside and there was no sign of struggle, nothing was damaged and no trace of blood on his sheets or bedding, the report adds

Saget had driven himself back from a stand-up gig two hours away in Jacksonville before handing over the keys to his Chevrolet Impala and walking into the Ritz-Carlton at 2:13am.

The father-of-three was then seen on CCTV walking ‘purposely across the lobby’ before entering his room at 2:17am. When he failed to check out later that day security let themselves into his plush suite at 3:53pm and found Saget slumped dead in his bed with swelling and small bruises in the corner of his left eye.

The door to room 962 was latched from the inside and there was no sign of struggle, nothing was damaged and no trace of blood on his sheets or bedding, the report adds.

Unusually, the internal door to the adjoining room, 961, was found unlocked but staff established that nobody had been inside it while Saget was there. Saget had stopped briefly to pose for a selfie with valet worker Orlando Nunez, 21, as he walked inside the hotel, warning Nunez first that he was recovering from Covid.

Cops later used the selfie to determine that Saget was uninjured when he went up to his room.

‘He had a mask on at that point so I had no idea who it was. I said it’s fine to take it off because I’ve had Covid twice myself,’ Nunez told DailyMail.com.

‘I recognized the voice but it was only when he took it off that I was like, oh man it’s Bob Saget, it’s so nice to meet you. ‘I didn’t see any injuries, he didn’t seem hurt, he wasn’t slurring his words – he was exactly as I remembered while watching him on the TV as a child. I was in awe.’

Nunez said the two men chatted warmly for several minutes about the pandemic, their families and their home state of California before they huddled for a photo on his cell phone. ‘He said he’d just driven back from Jacksonville but he didn’t seem tired at all, it was like he had just stepped off stage,’ Nunez went on.

‘We talked about Covid and he made a joke about how there are so many strains now they are giving them sorority names. ‘If anything I was very cautious about the picture as I wanted to be polite and respectful. But he said get in here, c’mon.

‘I’ve met a few celebrities who barely say a word but Bob was the most genuine, approachable guy. When I heard what had happened the next day I was devastated.

‘People keep asking questions about what happened but I don’t think there is a bigger pitcher that we are all missing. I just want him to rest in peace.’ 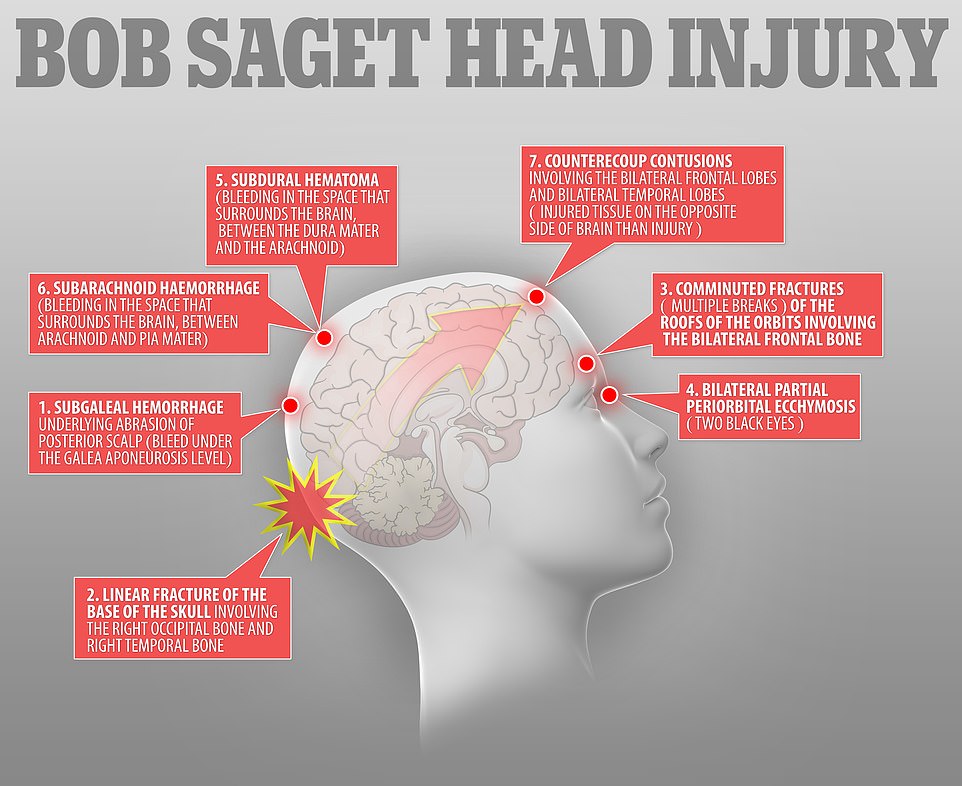 This diagram shows all the injuries sustained by Saget, resulting in his death from a brain bleed 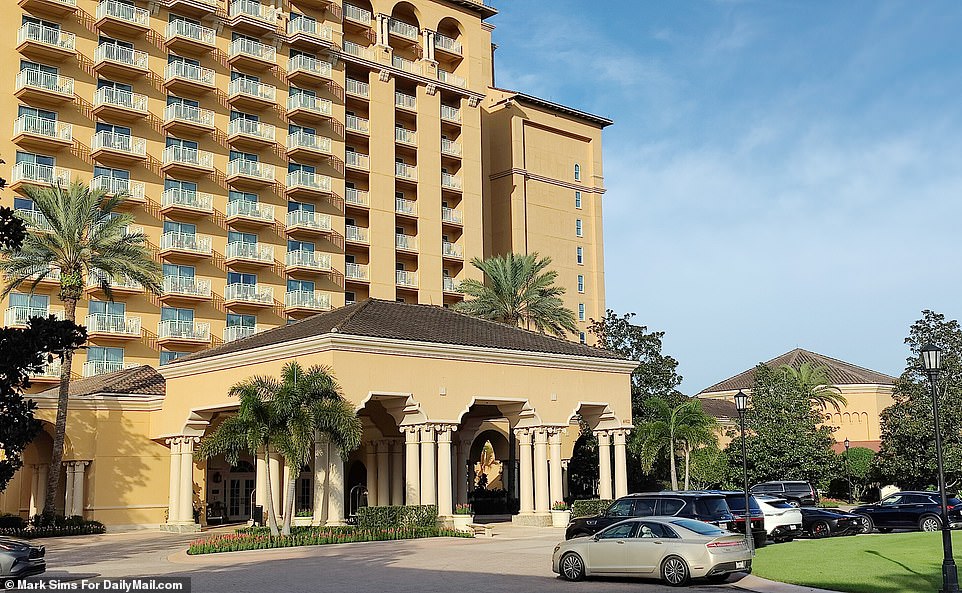 Saget had driven himself back from a stand-up gig two hours away in Jacksonville before handing over the keys to his Chevrolet Impala and walking into the Ritz-Carlton Orlando (pictured) at 2:13am 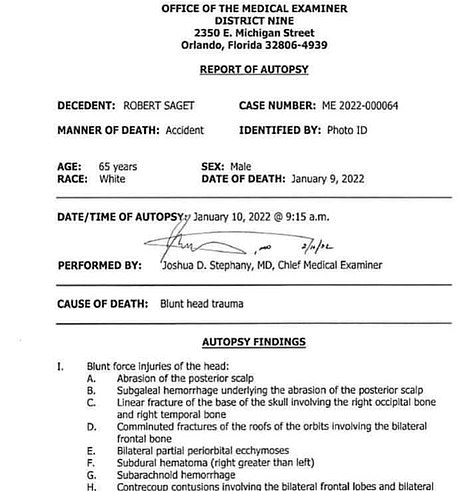 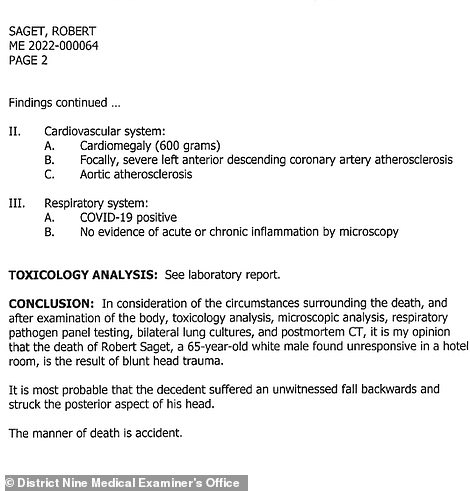 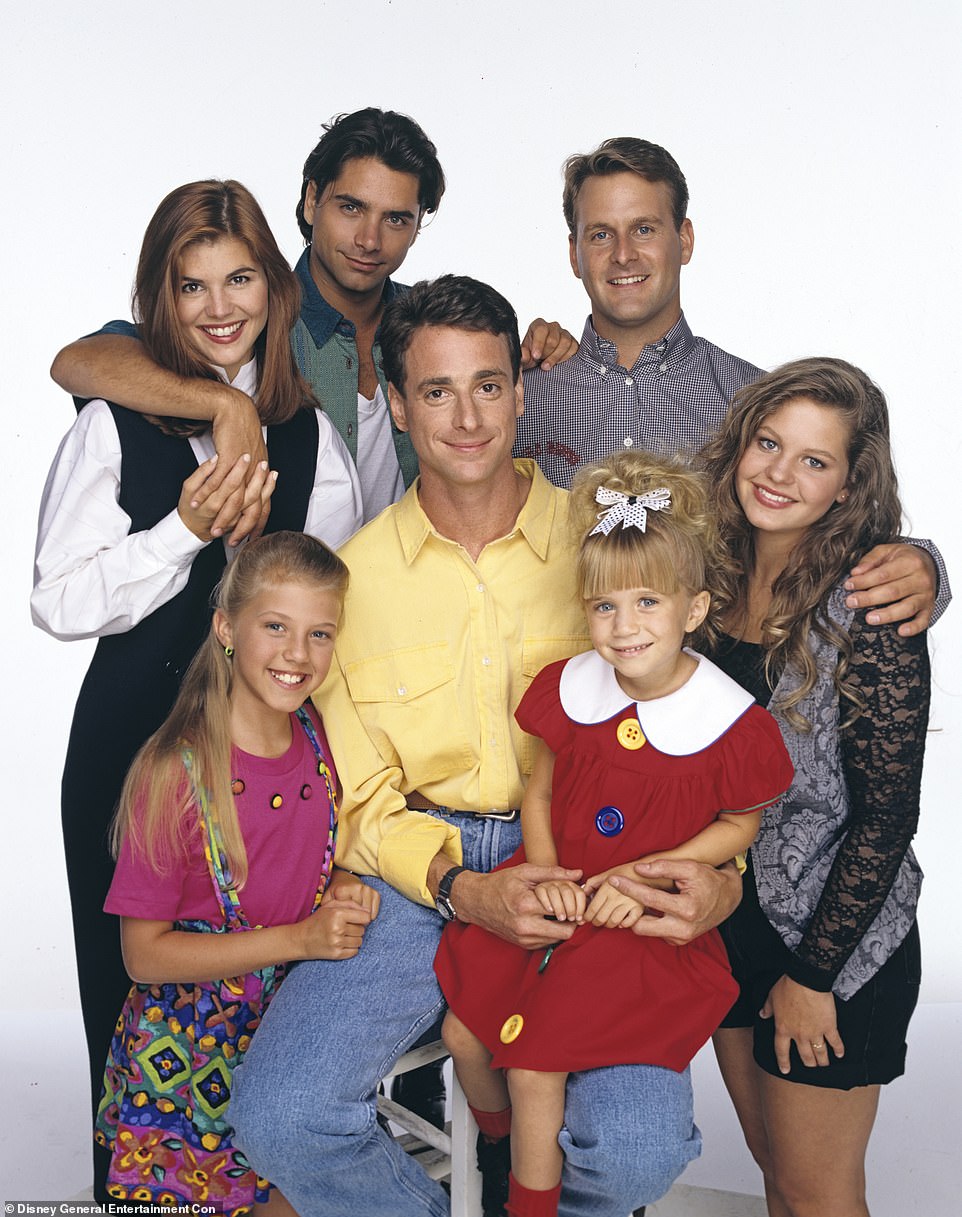 Saget’s death stunned his global community of fans and baffled his distraught wife Kelly Rizzo who said her husband was the happiest he had ever been and was in great health.

An autopsy confirmed his Covid diagnosis but Orange County medical examiner, Dr. Joshua Stephany, determined that it played no part in his sudden demise. Experts also ruled out drugs or alcohol as the cause, attributing the beloved funnyman’s death to ‘blunt force injuries to the head’ including various abrasions to the scalp and fractures to the base of the skull..

‘In consideration of the circumstances surrounding the death, and after examination of the body, toxicology analysis, microscopic analysis, respiratory pathogen panel testing, bilateral lung cultures, and postmortem CT, it is my opinion that the death of Robert Saget, a 65- year-old white male found unresponsive in a hotel room, is the result of blunt head trauma,’ Dr Stephany concluded. ‘It is most probable that the deceased suffered an unwitnessed fall backwards and struck the posterior of his head. The manner of death is an accident.’

Saget was on the road for his ‘I Don’t Do Negative Comedy Tour’ tour when he passed.

Investigators spoke to several people involved in the previous night’s gig at the Ponte Vedra Beach resort, outside of Jacksonville, but none of them recalled him acting strangely, taking drugs or drinking.

Hertz confirmed his car was undamaged when it was collected from the Ritz-Carlton.

A judge agreed last week to make permanent a court order prohibiting the release of graphic photos and videos relating to Saget’s death after his family filed a lawsuit to prevent them appearing in news articles and circulating online.