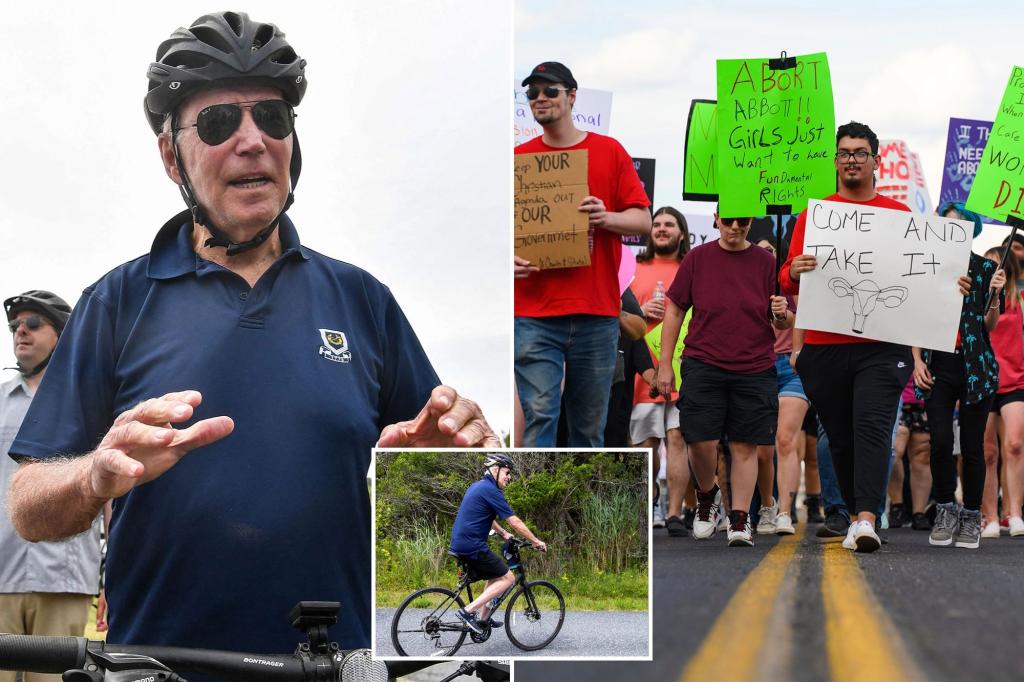 “Keep protesting. Keep making your point. It’s critically important,” Biden, who was on a bike ride near his family’s Delaware beach house, told those who have been demonstrating against the June 24 ruling.

Biden, 79, also said that he asked his staff “whether I have the authority” to announce the health emergency and what the impact would be, according to White House press pool accounts.

“We can do a lot of things to accommodate the rights of women,” he told reporters. “In the meantime, fundamentally, the only way to change this is to have a national law that reinstates Roe v Wade.”

Protests against the justices who voted to overturn the 1973 landmark case have continued since the ruling, and in some cases has prompted criticism of the tactics used to make their views heard.

Last week, Justice Brett Kavanaugh, who voted to strike down Roe v. Wade, had to escape Morton’s The Steakhouse in Washington, DC after protesters showed up outside the restaurant.

Morton’s lashed out at the demonstrators and condemned the incident.

“Honourable Supreme Court Justice Kavanaugh and all of our other patrons at the restaurant were unduly harassed by unruly protestors while eating dinner at our Morton’s restaurant,” a restaurant representative said.

Biden acknowledged that he had the power to ensure women have access to abortions and that their private information is protected but restoring the rights in Roe v. Wade will require Congress to act.

“As president I don’t have the authority to say that we’re going to reinstate Roe v. Wade as the law of the land,” Biden said. “My ultimate goal is to reinstate Roe v Wade as a national law by passing a law through the United States Congress and I’ll sign it.”

On Friday, Biden signed an executive order directing Health and Human Services Secretary Xavier Becerra to come up with a plan to safeguard access to abortions, medical care and contraceptives in all 50 states.​

Talking to reporters, Biden also pointed out that he removed a clip from the bike’s pedal that he blamed for causing him to crash last month after his foot got caught in the toe cage of his Trek.

​“I want you to know an important thing: I took off the … thing​,” said the president, who was ​wearing a blue shirt, black shorts, Ray-Ban sunglasses and surrounded by Secret Service agents.

In the midst of answering questions from the media, Biden realized he was wearing his helmet.

“I look like a fool here in this interview​,” he said. “I put this helmet on because it was a tough interview.”