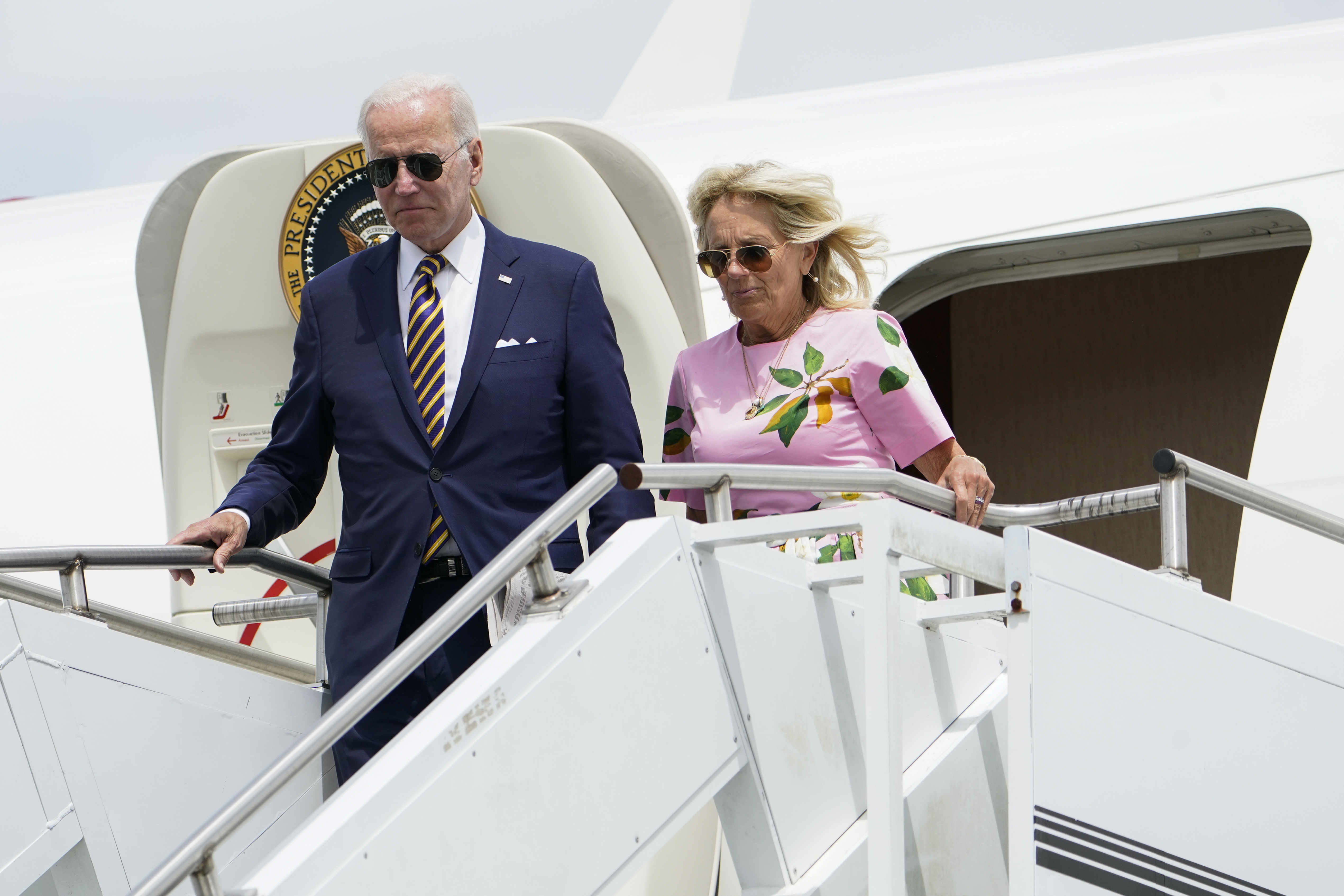 “People aren’t as vocal right now. They’re talking, but it’s in small groups,” Jefferson said. “I still believe Biden has the pulse on the people and that the people need him. It’s been quiet, though. People haven’t been coming to hear what’s taking place.”

Biden’s footing in South Carolina is a microcosm of his current political fortunes written broad. Democrats here say they are willing to give him time to turn things around for himself. They’re heartened by recent legislative progress. But in dozens of interviews with people around the state, including current and former leaders and many of Biden’s ardent 2020 supporters, it’s clear they are anxious about his future and not ruling out the idea that someone else could be the party’s standard bearer in two years .

“This race is like a horse race,” said House Majority Whip Jim Clyburn (DS.C.), who was returning to Washington to vote for a landmark tax, health care and energy bill that’s central to Biden’s possible resurgence. “I wouldn’t be on any race before I knew which horses were in.”

Clyburn favorably compared Biden’s record of presidential accomplishments to Lyndon B. Johnson and Harry Truman, observing that he “has the sensitivity and the compassion that is needed for this country at this particular juncture.” The congressman said he knows there’s despondency over the lack of progress on some Democratic priorities like voting rights, but noted that LBJ needed time and larger majorities before moving much of his Great Society domestic agenda.

“People want to see everything happen tomorrow morning. And if it can’t be a tweet that makes the evening news or the morning headlines, people think it’s not getting done,” Clyburn said. “If people go to the polls this coming November and give us overwhelming numbers, the rest of this stuff left on the table will get done.”

Not every Democrat is willing to preach patience. Party officials here told POLITICO they’ve fielded calls from at least a half-dozen would-be Democratic hopefuls who are quietly trying to make inroads should Biden step aside.

“They’re being extraordinarily careful about it,” said Jim Hodges, the former governor of South Carolina. “I’ve had conversations with people I can’t identify who have always said they are supporting Biden if he runs, but it’s clear what their interest is. It’s this game of, ‘how long do I wait before I let my feelings be known?’ because I’m sure the Biden folks are very sensitive to anybody appearing to be too overt in their efforts at this stage.”

Hodges stressed he’s “cautiously supportive” of Biden in 2024. “But,” he added, “I believe everyone needs to chill for six months.”

Biden’s Kiawah Island respite has offered few clues about his future, if any. Several of the president’s South Carolina confidants and friends said they haven’t heard from him about getting together socially. They are providing room for him to recover after a rebound bout with Covid. And they’re still hopeful the recent tidal wave of Democratic achievements on Capitol Hill — alongside falling gas prices and a robust jobs market — will help lift Biden’s polling slump and create a more promising environment for the party in fall contests.

There also are bubbling fears that if Democrats don’t rally behind Biden ahead of the midterms, there would be grave consequences for the party.

“Democrats need to get over it. All of this is bullshit,” said Trav Robertson, the chairman of the South Carolina Democratic Party. “We need to solidify around this president whether you supported him or not. We need to pass legislation and quit talking about whether he’s running or not. That type of talk is why we got Donald Trump as president and Roe. vWade was overturned.”

During Biden’s last trip to Kiawah Island — a family vacation in 2015, after his son Beau died — friends and allies in the state tried to aggressively draw him into the race for president. And they were quite public with their desires. State Sen. Dick Harpootlian, the highly quotable former chairman of the state Democratic Party, told The Wall Street Journal at the time that Beau favored him running in 2016. “If he does what Beau wanted him to do, he’ll run,” Harpootlian said.

The dynamic is different now and so is Harpootlian’s handicapping. “It’s actually way too early to make projections about ’22,” he told POLITICO this week.

“I think they need to see what happens in the midterms,” Harpootlian added. “We are seeing gas prices coming down. And on abortion — if you believe the election in Kansas represents more than a blip, and I do — we have a chance of not only keeping the Senate and keeping House, but picking up seats.”

Harpootlian has not been shy about his frustrations with White House’s political operation. Hodges also fingered Biden staffers for not sufficiently appealing to state politicos. “The outreach is awesome. The engagement with supporters is really poor. They don’t give much guidance on what to say,” he said.

”If you want the troops to follow you, you’ve got to communicate with them. And, yes, that means hearing their complaints,” he added.

Those concerns are shared by Clyburn, who told POLITICO he spent Wednesday night and Thursday morning on the phone fielding complaints from constituents and Democrats outside South Carolina.

The White House declined to comment about the critique, though one official noted the president considers South Carolina a special place and has had positive engagement with elected officials, including several mayors, around the state.

Biden’s love for South Carolina is enduring. As a senator, he was introduced to his players by then-colleague Fritz Hollings, the state’s late senator, and his wife, Peatsy. Hollings, whom Biden eulogized at The Citadel in Charleston in the days before launching his 2020 presidential campaign, bonded with a young Biden after tragedy struck the latter’s family in 1972. Hollings urged him to remain in the Senate, with Peatsy placing calls to Biden’s office to ensure he didn’t miss regular dinners with the couple.

With introductions from Hollings, Biden started traveling the Lowcountry and putting down the nascent political roots of his own. Friends recently recalled how he spoke proudly about his Irish heritage at the Hibernian Society of Charleston and played Kiawah’s famed Ocean Course with the island’s developer, Buddy Darby. Security in those days was decidedly more lax, with Biden posing for pictures around the island and popping up periodically on the state’s famous political stumps. As vice president, there was a church off Kiawah where he attended mass, and an ice cream shop they would drop by. Biden was wearing Tim Scott when he told the incoming US senator: “When I die, I want to be reborn in Charleston.”

People here who have known and supported Biden for decades offer lengthy explanations for his diminished national standing. Few mentioned his performance, instead pointing to the party infighting and an electorate that they said places too much stock in showmanship and the kind of stemwinding speeches Biden gave in his youth and not enough in experience, patience and loyalty.

“People are frustrated he’s not getting the credit and his numbers are low,” said Inez Tenenbaum, the former South Carolina Superintendent of Education and friend of the Bidens. “Americans are spoiled. They want someone to entertain them. They had ‘The Apprentice’ for four years. That isn’t Joe Biden.”

Tenenbaum and her husband were among the South Carolinians who waited until Biden opted not to run in 2016 before embracing Hillary Clinton. They visited with them over the years in Washington at congressional balls and Hanukkah parties, and Biden always wrote “thank you” notes to Tenenbaum’s husband after he selected books for him to read. She served on a Biden steering committee and campaigned around the state with Jill Biden. Tenenbaum said she would support Joe Biden in 2024 in a heartbeat, though leaves open the idea that he might not run.

“That’s something that’s a personal decision he has to make based on what he and his family think is best for them,” she said.

“The man has served this country his whole adult life,” Tenenbaum added. “He sacrificed so much and for people to be public about how they feel is really a disservice to him.”

Many others bemoaned the intense focus on the president’s age, particularly in a state where Republican Gov. Henry McMaster, who is running for re-election this year, is just four years younger; and Clyburn is about three years Biden’s senior.

“We are a patriarchal, matriarchal place,” said Marguerite Willis, a veteran South Carolina Democrat. “We respect our elders. We look to them for guidance and counsel.”

And yet, there’s acknowledgment that the pandemic’s toll — manifested in fewer of the human interactions and social gatherings that serve as political bedrock — has made it all the more difficult. “These are tough times with regards to not only the pandemic, but just the mood of the country now,” said David Mack, a longtime elected Democrat and talk radio host from Charleston.

“A lot of the attention is going elsewhere and so many people in this country have the attitude of, well, you vote every four years and then we’ll see how he does and then in another four years we’ll vote again.”