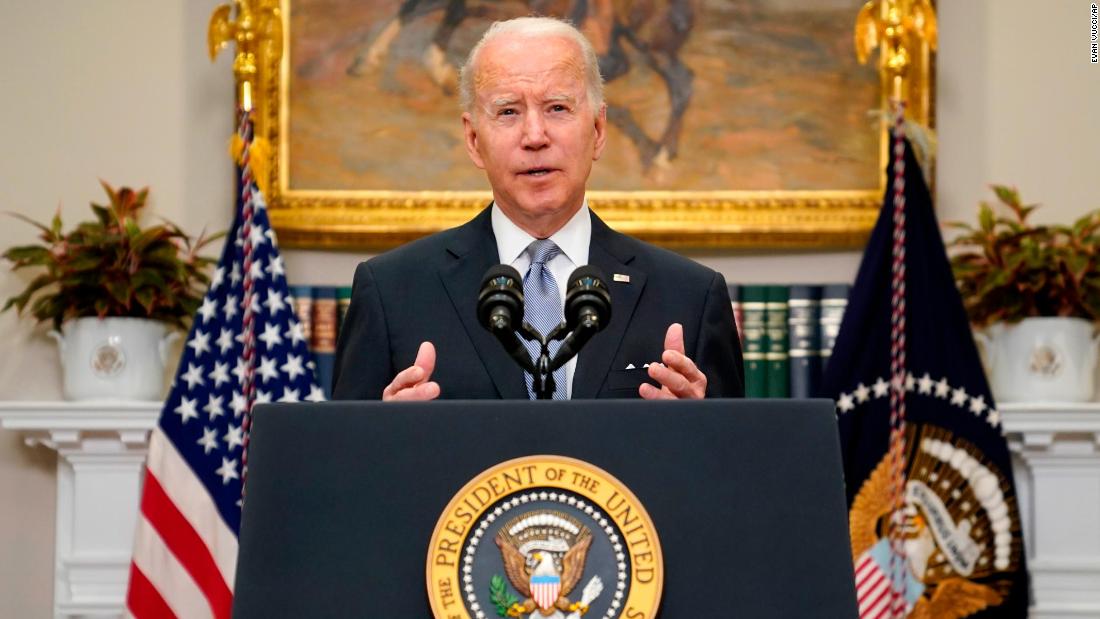 Biden announced the new shipments of aid — which includes heavy artillery and ammunition — in a speech from the White House meant to update Americans on the state of the conflict, which is nearing its second month and entering what US officials have said could be a bloody new phase.

“We’re in a critical window now of time where they’re … going to set the stage for the next phase of this war,” Biden said of the Russian military’s plans. “The United States and our allies and partners are moving as fast as possible to continue to provide Ukraine … the weapons they need, the equipment they need — that their forces need to defend their nation.”

The new military aid package the President announced comes in at roughly $800 million following a similarly sized measure earlier this month. If approved, the latest package would mean the US has committed approximately $3.4 billion dollars in assistance to Ukraine since Russia’s invasion began on February 24.

Biden said he will make a formal request next week for Congress to approve a second supplemental funding package to aid Ukraine, adding that he expected Congress to “move and act quickly” on the package.

“In order to sustain Ukraine for the duration of this fight, next week I’m going to have to be sending to Congress a supplemental budget request to keep weapons and ammunition flowing without interruption to the brave Ukrainian fighters and continue to deliver economic assistance to the Ukrainian people,” Biden said.

Biden also made a point to thank American taxpayers and military for their contributions Ukraine.

In speaking about the importance of getting aid to Ukraine, Biden paraphrased a famous quote from former President Theodore Roosevelt, telling reporters: “Sometimes we will speak softly and carry a large javelin, because we’re sending a lot of those in as well. ” He was referring to an anti-tank missile the US has provided to the Ukrainian military.

Biden added that sharing intelligence is a priority as the war grinds on.

“We’re sharing and will continue to share significant, timely intelligence with Ukraine to help them against Russian aggression,” he said.

In his speech from the White House, Biden updated Americans on US efforts to support the people of Ukraine along with unveiling the new assistance package, which has been finalized in recent days. Earlier in the day, Biden’s national security adviser Jake Sullivan met with Ukrainian Prime Minister Denys Shmyhal and the President stopped by.

“We had a good discussion,” Biden said.

Biden also announced the US is banning Russian-affiliated ships from American ports. While Russian ship traffic makes for a relatively small percentage of overall port activity in the US, the move is in line with a ban on Russian aircraft in US airspace the Biden administration previously announced.

“No ship that sailed under the Russian flag, or that is owned or operated by Russian interests, will be allowed to dock in the United States port or access our shores,” Biden said.

He said it was “another critical step” the US was taking alongside its allies in Canada and Europe “to deny Russia the benefits of international economic system that they so enjoyed in the past.”

The latest package would come a week after the Biden administration authorized another $800 million security package, which included artillery and anti-artillery radars for the first time since the Russian invasion began.

The Biden administration is working to get the military assistance to Ukraine as quickly as possible because it believes the war is at a critical stage and the continued US assistance could make a difference when Russia’s more aggressive assault on eastern Ukraine ramps up.

The more open terrain in that region favors the use of artillery and long-range systems, which is why the administration has placed a premium on getting those types of systems in quickly as the fighting moves away from Kyiv and into the Donbas region.

Biden discussed additional western assistance to Ukraine with fellow world leaders in a secure video call Monday, where he also voiced a need to provide additional ammunition to Ukraine. Other countries, including Canada and the Netherlands, have announced their own shipments of arms to Ukraine this week.

Meeting his top military officials at the White House on Wednesday, Biden touted the steady flow of American assistance into Ukraine as the war grinds on.

“Weapons and ammunition are flowing in daily, and we’re seeing just how vital our alliances and partnerships are around the world,” Biden told Defense Secretary Lloyd Austin, Deputy Defense Secretary Kathleen Hicks, the Joint Chiefs of Staff and US Combatant Commanders at a meeting in the Cabinet Room.

Biden said the US force posture has to be “dynamic” as the strategic environment abroad is “evolving rapidly.”

“We’re seeing this very day the need for adaptation as a consequence of us standing with Ukraine against Putin’s brutal and unjustified war. And I want to applaud the exceptional work you’re doing to arm and equip brave Ukrainians to defend their nation, “he said.

This story has been updated with additional reporting.