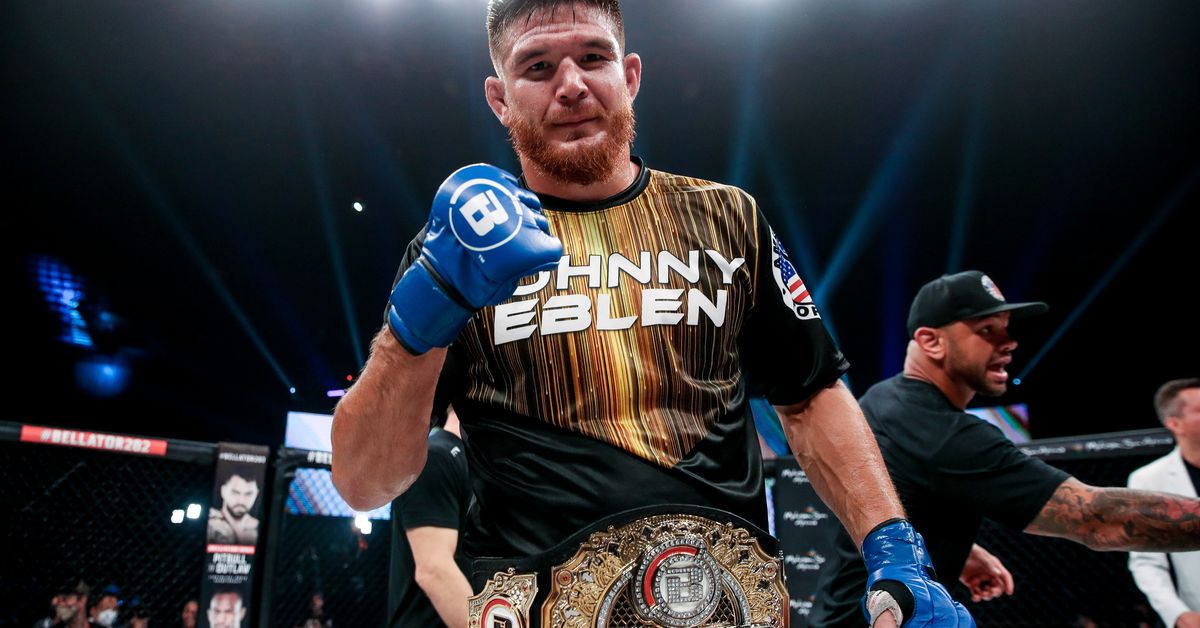 In a stunning performance, the undefeated 30-year-old outclassed Gegard Mousasi both on the feet and on the ground to sweep the judges’ scorecards and win a lopsided unanimous decision (50-45, 50-45, 50-45) on Friday night in the main event of Bellator 282.

For Eblen (12-0), the victory was never in doubt. The American middleweight came out with a point to prove, dropping Mousasi (49-8-2) in the opening round with a hard volley of punches and nearly sending the legend home early.

Mousasi survived to the horn, but the momentum never again returned to his favor. Eblen landed takedown after takedown and stuck to Mousasi like glue on the mat. He also pieced Mousasi up with a combination striking attack whenever the action retook the feet, leaving the former two-time champion unable to get out of first gear.

In a notable twist of fate, it was a similar sight to what played out in April 2010, when one of Eblen’s head coaches at ATT — Muhammed “King Mo” Lawal — shocked the MMA world by using his wrestling to upset Mousasi and steal away the Strikeforce light heavyweight title via decision.

“It feels right. This whole week felt right,” an elated Eblen said as Lawal celebrated. “I didn’t feel like anything was bigger than me. I just like I was in the right place the whole time. This feels right. I don’t know what I’m doing right, but goddamnit, this feels good.”

Eblen is now 8-0 in the Bellator cage, while Mousasi fell to 7-2 in the promotion.

In the night’s co-main event, Danny Sabatello made good on his words, dominating Leandro Higo with his own relentless wrestling attack to win a one-sided unanimous decision (49-46, 49-46, 49-46) and advance into a semifinal matchup against Bellator interim bantamweight champion Raufeon Stots in the promotion’s ongoing 135-pound grand prix.

Sabatello (13-1) scored takedowns in all five rounds and bullied Higo (21-5) with ground-and-pound and consistent mat pressure for long stretches of the bout. Higo’s best moments came in Round 2, when he reversed Sabatello’s ground control by using a kimura grip to take the brash American’s back and sink in a body triangle. Higo pummeled Sabatello with elbows and punches for the rest of the round, and even threatened with a rear-naked choke, however Sabatello survived and went right back to work in Round 3.

By the end, Higo was exhausted and Sabatello was landing takedowns at will, backing up the mountains of trash talk he flung Higo’s way in the lead-up, all while being lustily booed by the crowd inside the Mohegan Sun Arena in Uncasville, Conn.

“I was told if I swore in my post-fight interview, I might get fined,” Sabatello said to a chorus of jeers. “So it’s a good thing I don’t give af***! I just beat an absolute animal, and not one of you is going to do s***! Do you want to do something? Come in here right now and do something.”

Stots then entered into the cage and cut his own promo before engaging in a tense staredown with his semifinal round foe.

Elsewhere in the bracket, it wasn’t easy, but Magomed Magomedov also punched his ticket into the semifinals — and he did so by becoming the first man to finish UFC veteran Enrique Barzola. In a wild back-and-forth fight, Magomedov (19-2) ultimately submitted Barzola (18-6-2) via fourth-round guillotine choke to advance into a matchup against Patchy Mix.

Magomedov and Barzola fought tooth and nail throughout the contest, with Magomedov doing much of his best work on the feet, and Barzola repeatedly looking to take the action to the floor. Barzola secured each his first five takedown attempts through the opening 10 minutes and took the Russian’s back several times, however Magomedov was consistently able to escape and tag the Peruvian with vicious left hands and spinning attacks.

As the rounds wore on, Magomedov began to decipher Barzola’s timing on his takedown attempts, which ultimately led to the finishing sequence. It was a thing of beauty — in one fluid motion, Magomedov snaked in a slick guillotine choke on another takedown attempt and squeezed with all of his might to coax out the first tapout of Barzola’s career. The official end of the contest came at 1:27 of Round 4.

“I knew he was going to wrestle with me. After the second round, I told my corners, ‘I’m going to catch him now.’ You saw what happened,” Magomedov said.

In the opening bout of the main card, Brennan Ward continued his violent comeback tour with a second-round TKO of Kassius Kayne.

Competing for the second time since his five-year layoff due to struggles with drug addiction, Ward (16-6) came out on fire, tagging Kayne (12-8) with hard punches and repeatedly dragging him down to the mat throughout the opening frame. Ward continued that torrid pace in Round 2, rocking Kayne with a series of powerful shots along the fence before convincing referee Marc Goddard to jump in and stop the contest after landing a massive right hand to the body of Kayne.

It was yet another example of Ward’s kill-or-be-killed ways. The 33-year-old Connecticut native has yet to reach the judges’ scorecards in his 18 career bouts with Bellator.

Complete Bellator 282 results can be seen below.