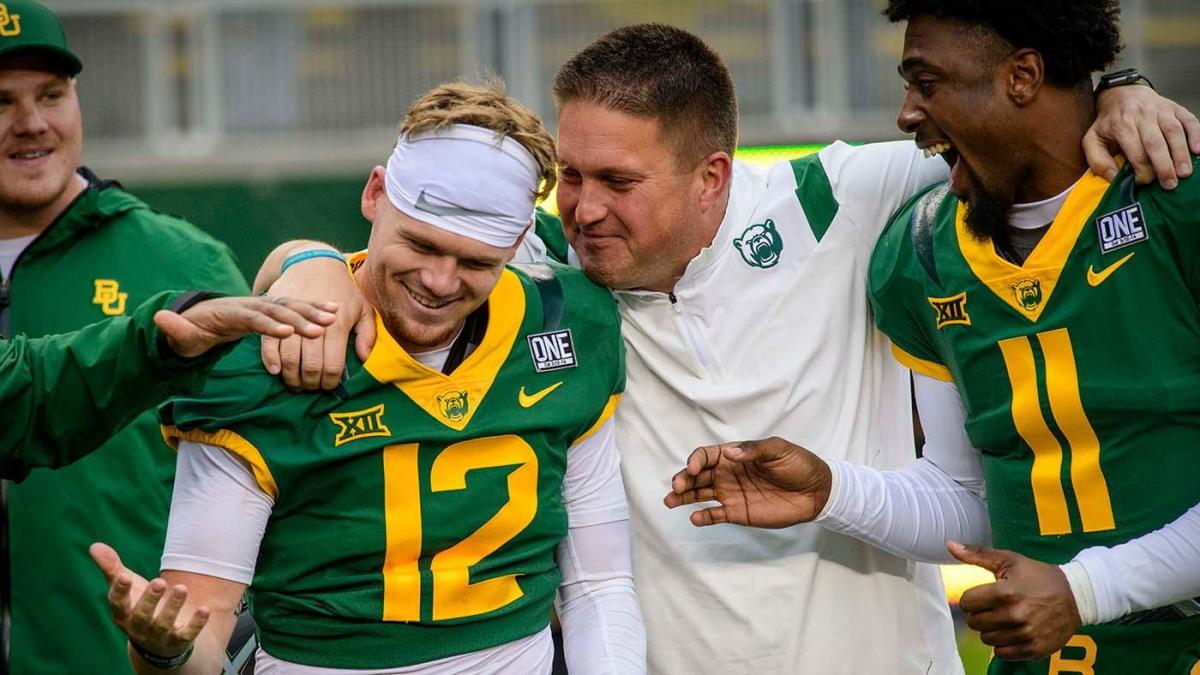 In a surprising decision, Baylor has named Blake Shapen his starting quarterback for the 2022 season, according to multiple reports. Shapen beat out incumbent senior Gerry Bohanon and redshirt freshman Kyron Drones during an open competition in spring practice. Meanwhile, in the wake of the decision, Bohanon has opted to enter the transfer portal, according to 247Sports’ Chris Hummer. He is a graduate transfer with up to two years of eligibility remaining thanks to the NCAA-granted free year of eligibility.

The sophomore Shapen played significant snaps in his first season as the primary backup. The Shreveport, Louisiana, native stepped in after Bohanon was hurt against Kansas State and started the Bears’ final two games. He completed 72.1% of passes for 596 yards, five touchdowns and no interceptions.

Bohanon completed 62.9% of passes for 2,200 yards, 18 touchdowns and seven interceptions in his lone season as starting quarterback. The Earle, Arkansas, product added nine rushing touchdowns while leading the Bears to a 12-2 record — the most wins in program history — and a Sugar Bowl win.

Baylor coach Dave Aranda was open that he planned to name a starting quarterback at the end of spring practice. The Bears are going through spring meetings this week after the annual Spring Game on Saturday.

Aranda made his decision six days before the transfer portal deadline on May 1 for Bohanon to be eligible to play in the fall. Now, Bohanon has an opportunity to earn a second chance elsewhere. Bohanon joins former blue-chip recruit Jacob Zeno — who landed at UAB — as Baylor quarterbacks to transfer over the offseason.

Baylor has shown to be far more willing to lean on the passing game with Shapen taking snaps. Bohanon averaged just 23 pass attempts per game last season and just 18 per game over his last four games. Shapen, conversely, threw 83 passes in his final 2.5 games, despite suffering a shoulder injury in the Big 12 title game that limited him.

There’s no better example of this than comparing Baylor’s two games against Oklahoma State. The Bears were held scoreless in the first half when the two teams met in Stillwater last October. When Baylor got opportunities in the Big 12 Championship Game, Shapen converted with three passing touchdowns in the first half.

While Bohanon provided a safety blanket, the staff felt Shapen was the more dynamic player who gave the Bears a chance to take a step forward. After losing key pieces on both sides of the ball, Baylor is betting on upside.

Baylor runs a bruising wide zone offensive system and leaned on the bulky Bohanon for several designed quarterback keepers every game. While Shapen has great speed, his 6-foot, 192-pound frame isn’t built to run through contact quite like Bohanon.

The Bears must replace 1,600-yard rusher Abram Smith at running back, goal Craig “Sqwirl” Williams and Taye McWilliams both showed upside in the spring game. The Bears also used flex player Josh Fleeks as a true running back on a few occasions. The team of running backs will have to step in and replace both Smith and Bohanon as running threats.

Offensive coordinator Jeff Grimes will likely move away from some of the quarterback run game with Shapen on the board, but Shapen will still be on the move. However, expect more of the bootleg game to turn into deep shots than running the ball alone. Stylistically, things will look more like Grimes’ system at BYU with Zach Wilson than a Jalen Hurts-style physical rushing attack utilized under Bohanon.

What’s next for Bohanon

The timing of Aranda’s decision is no coincidence. Making the choice gave Bohanon time to enter the transfer portal before it closed for the year on May 1. Now, Bohanon quickly becomes the most talented passer left in the portal by a long shot. Options are somewhat murky this late in the cycle, but Bohanon will have choices.

Arizona State seems like a natural fit after losing running quarterback Jayden Daniels to LSU. Sun Devils offensive coordinator Glenn Thomas coached quarterbacks in Bohanon’s first two years at Baylor. Missouri was active in the JT Daniels sweepstakes, and could look to Bohanon. UCF might want to get older at quarterback instead of relying on sophomore Mikey Keene, and Bohanon could fit very well in Gus Malzahn’s system.

Bohanon provides a strong arm and a dynamic running threat. If he ends up in the right system, he could thrive.