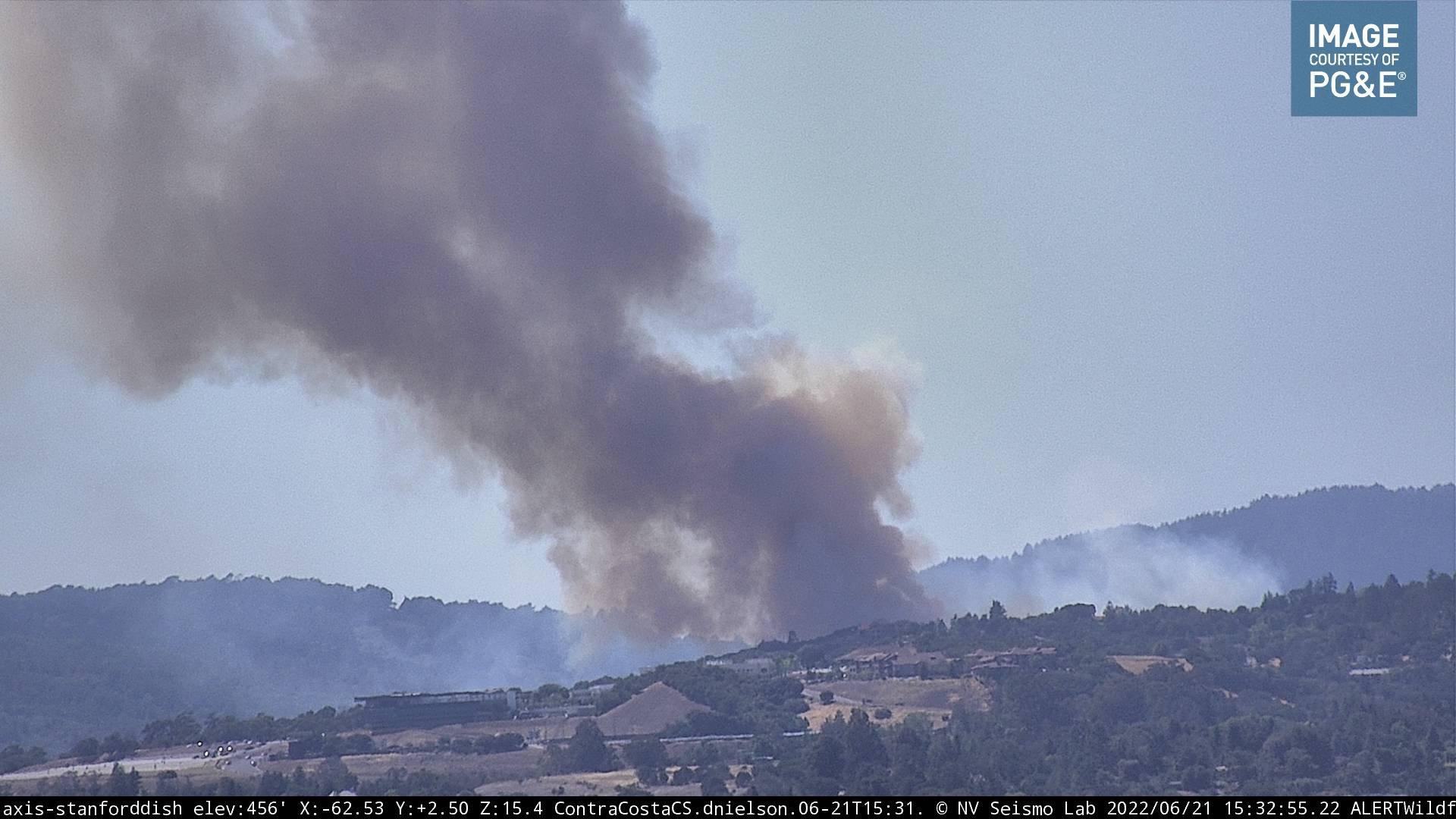 A fire that sparked at the edge of a nature preserve in unincorporated San Mateo County charred roughly 25 acres by early Tuesday evening, prompting evacuation orders for 1,133 homes during the day, officials said.

People called 911 to report the wildfire — which began as at least two fires — shortly before 2:30 pm, according to Jonathan Cox, Deputy Chief for Cal Fire’s San Mateo Division. Firefighters managed to contain the smaller Colton Fire after it had gnawed through several acres, so that it posed no threat later in the afternoon, Cox said.

The larger Edgewood Fire proved more difficult to quash, and was 5% contained when dusk settled at 8:30 pm Shortly after 8 pm, officials announced that all evacuation orders were downgraded to warnings, and the evacuation warnings issued earlier in the day were lifted .

“This is tight, narrow roads, and a lot of properties intermixed with a lot of vegetation,” Cox said, briefing reporters outside Woodside Fire Station.

As plumes of smoke rose during the afternoon over the dry, conifer-studded hillsides, officials from Cal Fire’s San Mateo-Santa Cruz division asked motorists and bystanders to avoid the area near Edgewood Road and Crestview Drive, where the blaze had started. For hours, the unwieldy fire spread norththrough a corner roughly bounded by Woodside, Redwood City and the Edgewood Park and Natural Preserve.

In a tweet, the San Mateo County Sheriff warned of a “fast-moving grass fire,” and ordered people during the day to evacuate a zone around Maple Street, bordered by the lake at the northeast side, the golf course at the south and the preserve, which is criss-crossed with hiking trails, to the west. The sheriff also recommended that residents evacuate the area between the Emerald Hills neighborhood and Interstate 280.

Firefighters are responding to a fire at Edgewood Road and Crestview Drive in San Mateo County. Please avoid the area and watch for emergency vehicles on the road. pic.twitter.com/EqkT03malB

An evacuation center was set up at 1455 Madison Street in Redwood City, along with a staging area for large animals in the Cañada College parking lot. By early evening, 1,133 homes had been ordered evacuated, though those orders were lowered to warnings before nightfall.

Persistent heat would likely force firefighters to keep battling the Edgewood Fire throughout the night “until we do get some containment,” Cox said. Though no residents reported injuries, one firefighter was injured on the line and transported to a hospital. By late afternoon no structures had been damaged, but many were in danger, including a PG&E substation on Cañada Road.

“We’re seeing fire behavior that’s weeks ahead of where we typically are” in the middle of June, Cox said, pointing to “unsettled weather” with dry air, offshore breezes and a conspicuous absence of fog.

Smoke shrouding nearby I-280 hindered visibility for motorists. While the freeway remained open, it was choked with traffic and the on-ramps to Edgewood and Jefferson were closed as of 5:30 pm, San Mateo County Sheriff spokesperson Javier Acosta said.

The Stanford University campus and other parts of San Mateo County lost power; but it was not immediately clear whether the outages were related to the fire. College of San Mateo also lost power on Tuesday, forcing the campus to close and cancel all in-person classes. Officials tweeted that the school would reopen on Wednesday.

The Edgewood Fire came on the first day of what could be a vicious summer, with temperatures soaring into the low hundreds in parts of the Bay Area and forecasts of dry thunderstorms on Wednesday and Thursday. The extreme heat, parched landscape and monsoon moisture whipping in from the southeast prompted multiple advisories from the National Weather Service.


This is a developing story and will be updated.