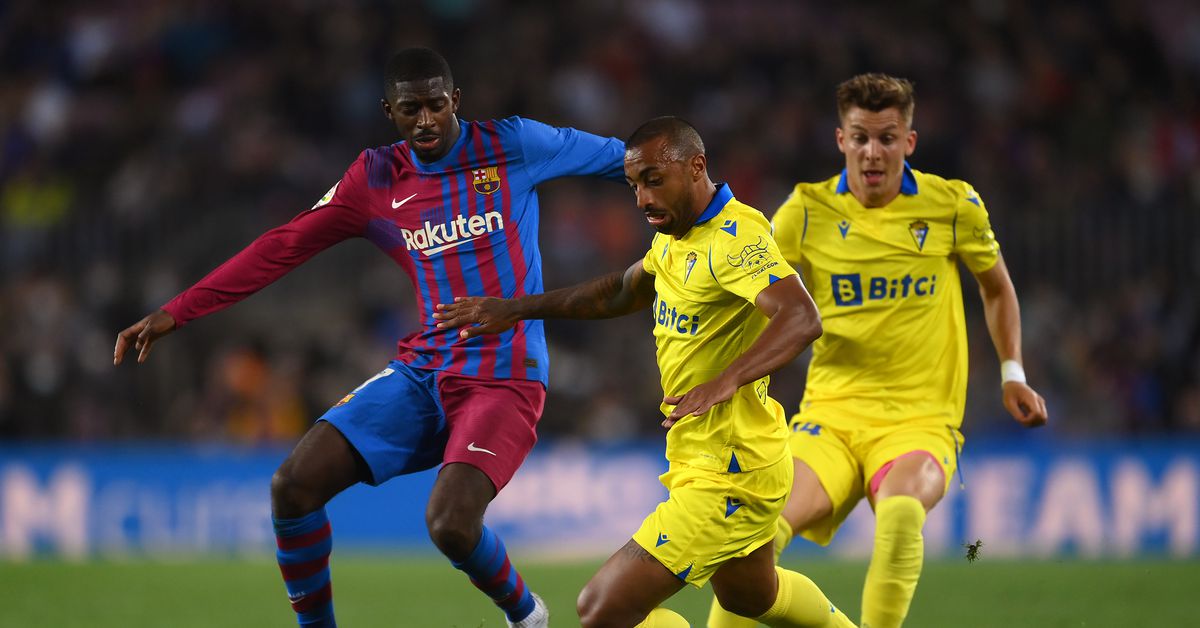 Barcelona will remain in second place in La Liga but their eight-game winning streak has come to an end thanks to a 1-0 loss at home to struggling Cádiz on Monday night. Barça were not at their best on the night, conceded an early goal in the second and couldn’t find a way to break down a stubborn defense from the visitors, who pulled off a major upset at Camp Nou to get out of the relegation zone .

The first 45 minutes weren’t the greatest we ever watched, but there were still positives about Barça’s play: the Blaugrana came out playing with good pace and rhythm in the attacking third, finding gaps inside the Cádiz defense with good movement in and around the box, and they were really dangerous whenever Ousmane Dembélé was involved.

The Frenchman was easily the best player on the pitch in the first period, dominating every Cádiz defender in his path with his speed and dribbling and putting in dangerous crosses that either just missed the mark or were cleared at the last second by an opposing defender. He also had a powerful shot well saved by Ledesma in what was Barça’s best chance of the half, but the Blaugrana could not find the back of the net.

Cádiz defended very deep and attacked very little for most of the half but had a huge opportunity themselves: after a long ball forward, Rubén Sobrino gave Lucas Pérez a tap-in from eight yards out but the Cádiz striker somehow missed the mark completely and wasted his team’s biggest chance of the period.

At halftime Barça were playing well enough to deserve the lead but Cádiz had fired a warning shot of their own, and we were somehow goalless heading into the second half.

Barça started the second half conceding a goal: after a cross from the left that caught both Eric García and Clément Lenglet ball-watching, Rubén Sobrino forced an amazing double save out of Marc-André ter Stegen but Lucas Pérez was first to the rebound and gave Cádiz the lead, and Barça had 40 minutes to make a comeback.

Tea Blaugrana certainly tried as hard as they couyld to go forward in search of the winning goals, and they came very close on several occasions but either missed the final pass or saw goalkeeper Ledesma make excellent saves. Cádiz kept finding a way to hang on to their narrow lead, and had a few huge chances to double their lead and kill off the game, with Álex Fernández missing the biggest of them with a wide-open miss similar to Pérez in the first half .

Xavi Hernández feels Pierre-Emerick Aubameyang, Adama Traoré and Luuk De Jong off the bench looking to make an impact, and De Jong looked very dangerous on crosses as he often does but it just didn’t seem like Barça’s night as we entered the final 10 minutes.

Barça kept pushing and creating really good chances but Ledesma had an amazing night in goal and made one big save after another to keep the clean sheet. The final whistle came, and Barça have now lost two straight at home to teams they should have beaten and that’s now four poor performances in a row in the last 10 days. The vibes aren’t great right now, and Real Sociedad away is on Thursday. It’s time to react before things get tricky in the league.