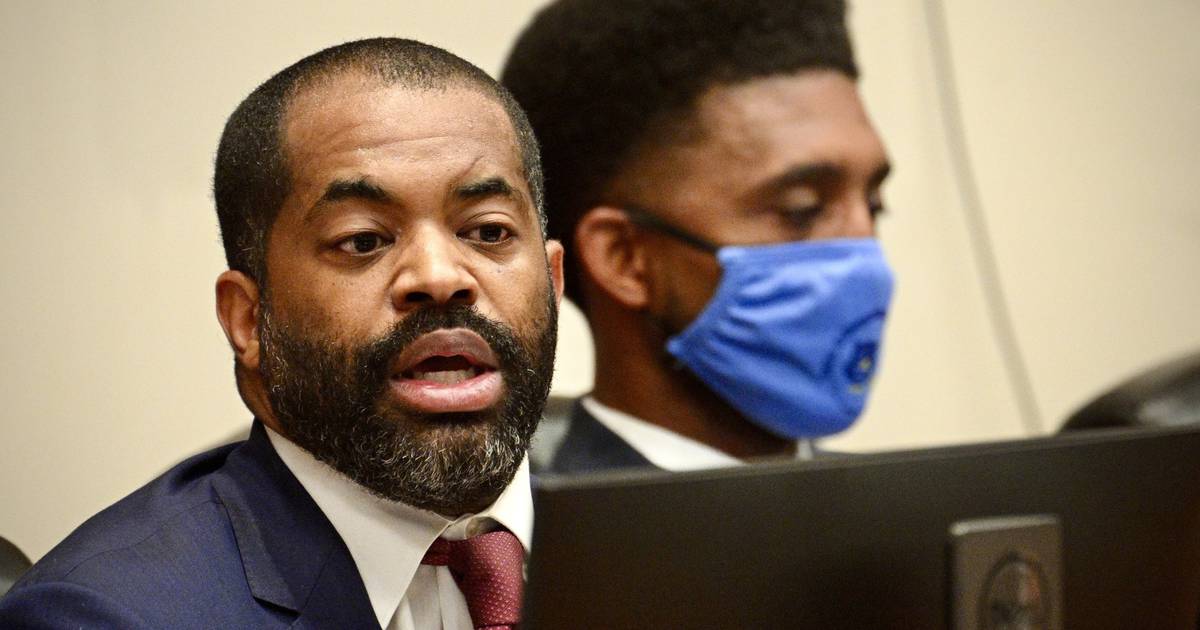 Baltimore City Council President Nick Mosby publicly apologized Wednesday for the chaotic scene that unfolded Tuesday night in City Hall involving a housing lobbyist who he held a joint news conference with, allowed to speak in Council Chambers and had promoted to his fellow council members.

Sitting alongside Mayor Brandon Scott and his fellow Board of Estimates members Wednesday morning, Mosby said “some” of the night’s actions were “completely disrespectful to the institution of the City Council, to this historic building and to the overwhelming amount of citizens who were here to participate and be civically engaged.”

The apology, which a group of six council members Wednesday decried as not enough, came the morning after a boisterous scene inside the building that included accusations of financial impropriety against Scott and another council member, a veiled threat of physical violence and a group of attendees banging on Scott’s office door.

Shortly before a 5 pm Tuesday council meeting on Mosby’s stalled Dollar House revival legislation, the council president held a joint news conference in City Hall with Bruce Marks, CEO of the Boston-based housing organization Neighborhood Assistance Corporation of America. Marks had organized a group of supporters to attend who initially were 75-strong, but grew as the evening progressed.

Marks and Mosby led the group across a hallway to council chambers, where Mosby invited Marks to speak. As he approached the microphone, Marks led his group of then about 150 people in a song about affordable housing. Mosby, who officiates the meetings as council president, did not interrupt.

Marks then called the words of a staffer from the Department of Housing and Community Development “bullshit,” and suggested that both Scott and Councilwoman Odette Ramos were “bought and paid for” by the real estate industry.

Earlier during council’s meeting, a group of supporters, led by Marks, marched through City Hall to the mayor’s office on a lower floor, where they banged on his door. The mayor was not present at the time, his staff said. The roving group’s shouting could be heard inside council chambers.

Following Tuesday’s meeting, Mosby denied that Marks was his guest at the meeting, saying he was instead a “subject-matter expert.” However, several members of council said they had been approached by Mosby’s office ahead of Tuesday’s meeting about meeting with Marks.

On Wednesday, Mosby called the situation an “embarrassment to this building.”

“As the leader of that institution, it’s my responsibility to make sure that never takes place again,” he said.

Mosby said he would work with Scott and the Department of General Services to ensure city business is not disrupted in the future.

Scott said Wednesday his primary concern is the safety of elected officials inside City Hall.

“You just can’t come here acting really like a child and thinking that you’re going to come here from Boston and demand things,” Scott said in reference to Marks. “We just can’t have folks operating that way.”

Ramos, a longtime housing advocate criticized by Marks during the meeting, called Tuesday night’s events an “insult to every single council member and frankly to the city of Baltimore.”

Ramos said Mosby did little to maintain decorum in council chambers during the commotion, noting he did not strike his gavel as Marks led the crowd in chanting. At one point, Marks indicated there was an even bigger crowd outside council chambers.

“I want to make sure there’s not a riot outside,” Marks said.

There was no security guard in council chambers at the time of the incident, Ramos said.

“I was feeling like because we disagree with the bill, he’s going to put us in harm’s way,” she said. “I’m really really disappointed in the council president.”

Tuesday’s meeting was the first that city council has held in person on Mosby’s legislative package, which calls for the return of the city’s popular Dollar House program. The program gave away city-owned houses in the 1970s for $1 in exchange for homeowners renovating and living in them.

Unlike the original Dollar House program, Mosby’s plan calls for targeting longtime residents who have been renting rather than owning. The plan also is targeted at homes in underserved areas of the city left behind by the racist mortgage lending policies of the past.

The Dollar House bill is being considered alongside two other housing proposals championed by Mosby that would award home-repair grants of up to $50,000 and offer assistance for older adults who have defaulted on reverse mortgages. Buyers investing in a home through the Dollar House program would be able to take advantage of the home-repair grants to make improvements to their homes.

Over the course of at least a half dozen meetings on the legislative package, council members and city housing officials have raised concerns about the eligibility requirements for the program, which they argue are unnecessarily complicated and the potential for homeowners to find themselves underwater — having invested and borrowed more than their homes are worth — from the moment they renovate them.

The only vote taken on the measure was during a virtual meeting in early March. Council deadlocked 7-7 with one member absent when Mosby attempted to advance the bill. It has been stranded in committee since.

Ramos was among the council members who voted against advancing the measure. She said she has met with the council president since then, and on Tuesday, was summoned to Mosby’s office for a meeting about the proposal. There she was greeted by a surprise guest: Marks.

Ramos said she had not heard of his organization, known as NACA, before, and asked numerous questions.

“I thought we had a good conversation back and forth, and we agreed to disagree,” she said.

Cohen, who attended the Tuesday’s session, said afterward the discussion did nothing to allay any of his concerns about the Dollar House bill.

“Coming here and insulting our mayor, going down and banging on his door, making veiled threats about preventing a riot is a completely inappropriate way to conduct yourself as a witness in a City Council meeting,” he said. “I don’t believe that behavior is appropriate, nor that it changed any hearts or minds.”

On social media, Torrence, who was not at Tuesday’s meeting due to a scheduling conflict, tweeted that Marks’ “antics” were “unacceptable” and called for NACA to remove Marks from his post.

Dorsey, who left the meeting, on Twitter called the proceedings a “total mockery of a legislative convening.”

“Baltimore deserves so much better than to have our time wasted and intelligence insulted with AstroTurf nonsense,” he tweeted. “We have plenty else to do.”

Keep up to date with Maryland politics, elections and important decisions made by federal, state and local government officials.

Local housing advocates have largely opposed Mosby’s legislation, arguing during past hearings that the bills do not provide enough financial assistance to help buyers renovate their homes. Advocates also have raised concerns about the lack of concentration of homes available for purchase. City-owned vacant properties are scattered across the city and, in many cases, are surrounded by other privately owned vacant homes.

NACA is a nonprofit lending company and advocacy group that offers mortgages with below-market interest rates. The group has led housing-related demonstrations in cities across the country, according to published reports. Recipients of NACA mortgages join as members and participate in community service events, which can include rallies.

“We want people to participate,” he said, “but it’s not like they get any extra benefits or anything from doing that.”

Marks said he saw no issues with his behavior during the hearing, and noted there was no violence.

“We have a lot of respect for President Mosby, and he needs to work with the other city council members,” Marks said. “People should not get bent out of shape about not adhering to the decorum and focus on the substance of this important legislation.”