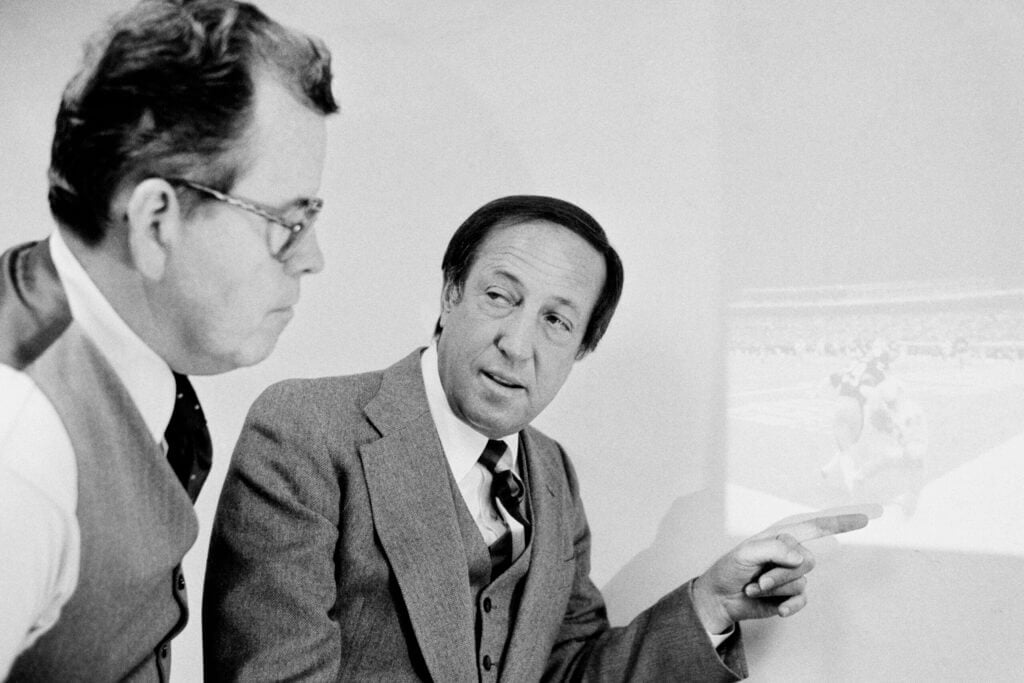 The irony in inducing Art McNally into the Pro Football Hall of Fame is that he repelled fame. McNally keeps a ledger in his Philadelphia-area home of every game he officiated in any sport — 3,145 total. The objective was to leave all 3,145 without anyone remembering he was there.

This sentiment followed McNally through 48 years in the NFL. He was on the field for nine seasons, from 1959 to 1967, and became the NFL’s supervisor of officials in 1968. Officials are like lifeguards at the beach: You need them there, but you don’t want to be talking about them on the way home.

“So many people are looking for their 15 minutes of fame and glory,” said Walt Anderson, the NFL’s senior vice president of officiating. “And to really be a good official, you have to sincerely be happy with being out of the limelight. You will want to be fully prepared and really treasure not being the story. … And Art, that was his heart and soul in terms of his feeling on officiating’s place in the game. He was also very consistent in delivering (that) message.”

McNally, 97, will make history as the first on-field official to enter the Hall of Fame, although his induction has more to do with his overall body of work than his time on the field. Officiating is an essential part of football, but the merit of an official can be hard to quantify or qualify for Hall consideration. A player has statistics. A coach has a record. An owner has organizational accomplishments. McNally’s entry is based on the reputation he earned through decades in the league. When McNally received the call to inform him he was a finalist, it was explained to him that “integrity” was the word echoed during his candidacy.

“He … personifies integrity and credibility,” Anderson said. “So much of what officiating stands for is maintaining, protecting, preserving the integrity of the game, and I don’t think anybody personifies that more so than Art McNally.”

McNally’s equanimity was essential to his job. When Norm Van Brocklin coached the Vikings, the line judge ran over to inform McNally that the “Dutchman wants to talk to you.” It wasn’t to exchange restaurant recommendations. And “talk” would be an understatement. Van Brocklin was yelling and cursing, according to O’Hara, and kept going until he ran out of breath.

“All right coach, anything else?” McNally said.

McNally was once tasked with informing Vince Lombardi that a touchdown his team scored was going to be overturned. Lombardi took it as one would imagine. McNally was removed.

“He wasn’t changing the call; Lombardi could have yelled all he wanted,” O’Hara said. “Because it was the right call.”

A Philadelphia native who was a devoted follower of Big 5 basketball and the Army-Navy game, he never allowed himself to support an NFL team. That’s his job. It’s his integrity. He wouldn’t be caught wearing a team’s attire — unless he was tricked into it. During a training camp tour, former Houston Oilers coach Bum Phillips watched practice from a tower overlooking the field. He called McNally up to the tower. Phillips said McNally needed a hat because of how sunny it was in Texas. McNally refused, but Phillips put one on his head at the moment a photo was taken. “I got ya!” Phillips said, per O’Hara.

As a supervisor, McNally and his staff hired and evaluated NFL crews. He installed professional sports’ first formal program to train and evaluate officials, per the Hall of Fame website. And because of his longevity, it’s hard to find an official who doesn’t have roots back to McNally. Either McNally hired the official, or the official was hired by someone appointed by McNally.

“They always talk about coaching trees,” Anderson said. “I think the same thing can be said from an officiating standpoint that so many of today’s NFL officials can certainly trace, not just their start, but certainly their influence through Art McNally.”

McNally’s material effects on football shouldn’t be discounted. He added the seventh official to NFL games. He brought instant replay to the league. He introduced video to NFL officiating. There are parts of today’s NFL, whether playing rules or officiating decisions, that were born from McNally and McNally-era policies.

But his legacy might be felt most with the people, and O’Hara runs into officials at all levels who bring up his father-in-law. The NFL annually gives out the Art McNally Award to a game official who best exemplifies qualities for which McNally is known. The NFL’s officiating command center has been renamed “Art McNally GameDay Central.”

“Art’s tree is a big oak,” Anderson said. “And he’s certainty the trunk of that tree for so many of us in today’s officiating world.”

That’s also why the honor is meaningful. The story of football cannot be told without officials, even if they’re not supposed to be part of the story. So it makes sense for a museum about football to recognize an official. McNally is the sensible choice to be the first.

“Art will never be one to boast for himself, but everybody for many years has been rooting — that if anyone deserved this recognition, it was Art McNally,” Anderson said. “And it’s just because of what he’s meant for so many decades to the game, how he’s contributed, how he’s worked tirelessly behind the scenes.”

McNally’s late daughter, Rita O’Hara, worked for the NFL and wrote letters for years advocating for her father’s candidacy. When Brian O’Hara goes to Canton this weekend, he’ll think about his wife who died in 2019 — three years before Rita, her father’s “biggest fan,” could see this come to fruition.

For a few minutes in Canton, McNally will be in a place he never wanted to be at a football event: the spotlight. If the words are accurate and the rules are followed, it would be an appropriate tribute.

“He just wanted to be right. That’s all,” O’Hara said. “And then move along.”