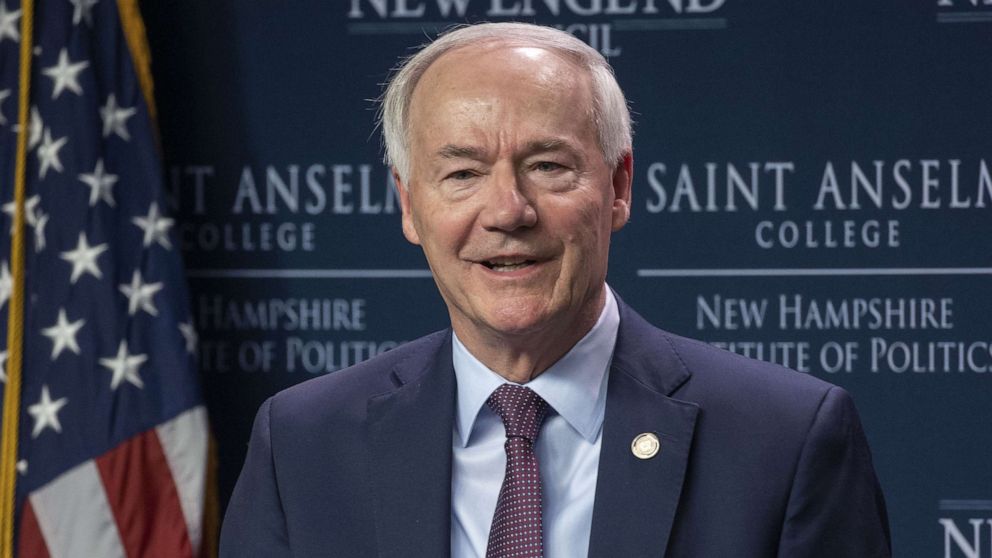 Arkansas Republican Gov. Asa Hutchinson said Sunday that he opposes a national ban on abortion because he would take away the authority of a state like his that is poised to immediately ban abortion if Roe v. Wade is overturned by the Supreme Court.

“I think that’s inconsistent with what we’ve been fighting for for decades, which is that we wanted the Roe vs. Wade reversed and the authority to return to the states,” Hutchinson told ABC’s “This Week” co-anchor Martha Raddatz. “So, as a matter of principle, that’s where it should be.”

Hutchinson appeared on “This Week” just days after an unprecedented leak of a draft Supreme Court opinion on abortion cast a new spotlight on what could happen if the high court overturns Roe v. Wade.

The document, obtained by Politico, though not final shows the Supreme Court’s conservative majority of justices are ready to overturn nearly 50 years of established abortion rights precedent through its decision in the Dobbs v. Jackson Women’s Health case out of Mississippi that the court heard last year. A ruling is expected by the end of June.

In March 2021, Hutchinson signed a bill that prohibits abortion in all cases except to save the life of the mother. Cases involving rape and incest are not considered exceptions under the law, something Hutchinson said he did not completely agree with at the time.

The bill also charges anyone who performs a non-approved abortion with a felony punishable by up to 10 years in prison.

A US district court judge in Arkansas issued an order in July 2021 temporarily blocking Arkansas’ near-complete abortion ban while a lawsuit against the measure proceeds.

After wishing mothers across the country a “Happy Mother’s Day,” Hutchinson dodged the question, replying, “in terms of Arkansas law, our law simply expresses the will of the people of Arkansas.”

Raddatz pushed back, saying, “I want to go back to my question about those women.”

Hutchinson responded, “Well, first of all, that’s where your heart goes out to them.”

“I’ve had to deal with those very difficult circumstances of rape and incest as governor and it’s difficult. And so, you have to understand that,” Hutchinson said. “You have to provide services. And I believe that we would want to increase the services for maternal health, to increase the services for adoption services as well. So, we want to invest in those areas that will help those women with very difficult circumstances of the pregnancy.”

When he signed Arkansas’ near-complete abortion ban, Hutchinson issued a statement saying he “would have preferred the legislation to include the exceptions for rape and incest.”

He told Raddatz on Sunday, that “even though we have the trigger law, I expect those exceptions to be a significant part of the debate in the future, even though we’re going to immediately go to restrict abortions with the exception of the life of the mother.”

“Why do you support those exceptions?” Raddatz asked.

The governor responded that “those exceptions are what generally the public has insisted upon as being reasonable exceptions to abortion limitations.”