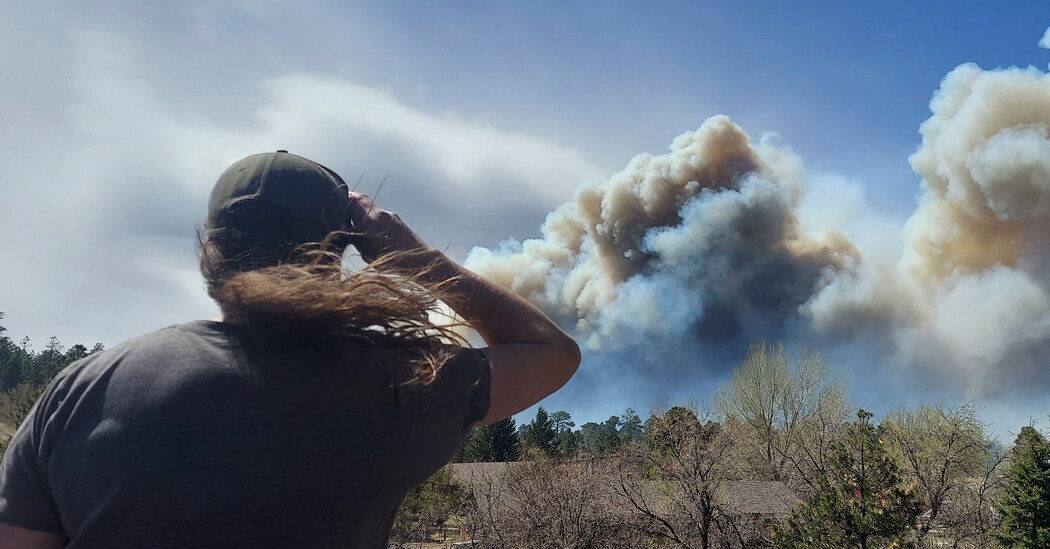 Breezy and dry conditions were expected across Northern Arizona on Wednesday, hamering efforts to contain a fast-growing wildfire that prompted the evacuation of more than 700 homes the day before.

The Tunnel fire, about 14 miles northeast of Flagstaff, was reported on Sunday afternoon and grew to about 100 acres by Tuesday morning. By early Wednesday, it had grown to more than 6,000 acres, or 9.3 square miles, and was spreading rapidly to the northeast, away from the city and through a sparsely populated area, officials said.

While there were no immediate reports of injuries or casualties Tuesday night, officials said they received a call about a man trapped inside his burning home. It was unclear if he survived.

Forecasters said weather conditions over the region would remain less than optimal Wednesday, with wind gusts up to 30 miles per hour. While stronger winds were expected by the end of the week, a fire weather watch was in effect over the region for Thursday, said the National Weather Service in Flagstaff, adding that the combination of gusty winds and low humidity could fuel fires to grow in size and intensity.

The blaze was completely uncontained as of Tuesday evening, officials from the Coconino National Forest said. More than 200 firefighters and other personnel were assigned to it, and a section of US Highway 89, which runs north from Flagstaff toward the Utah border, was closed.

Patrice Horstman, the chair of Flagstaff’s board of supervisors, said at a news conference on Tuesday that 766 households and more than 1,000 animals had been evacuated so far.

At least two dozen structures had been destroyed, and hundreds of others were threatened, Jim Driscoll, the sheriff of Coconino County, said at the news conference.

The fire’s quick progression made the evacuation effort more challenging than previous ones, he added, and personnel from multiple agencies had “some difficulty getting some people to leave” their homes despite a mandatory evacuation order.

The cause of the fire was unclear as of late Tuesday evening. Matt McGrath, a district ranger at the Coconino National Forest, said that an investigative team would be in the area on Wednesday.

Wildfires are increasing in size and intensity in the Western United States, and wildfire seasons are growing longer. Recent research has suggested that the heat and dryness associated with global warming are major reasons for the increase in bigger and stronger fires.

Flagstaff, a college town of about 76,000 residents, is approximately 150 miles north of Phoenix, the state capital, and about 80 miles south of the Grand Canyon.

Firefighting aircraft in the Flagstaff area were called off on Tuesday because of the “pretty much unprecedented winds that we were experiencing,” True Brown, the fire management officer for the Flagstaff Ranger District, told reporters.

“When we’re talking flame lengths upwards of 100-plus feet, there’s really no piece of aviation or equipment that’s going to be able to stop it,” Mr. Brown said.

He added that firefighters planned to patrol the area on Wednesday to secure as much of the fire’s uncontrolled edge as possible.